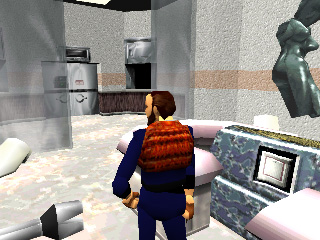 Up until the release of OverBlood – their first PlayStation production – in 1996, Riverhillsoft was mainly known for its fairly successful US-themed but Japan-only adventure games for the MSX or the X68k such as the J.B. Harold series. Their entering the market of Sony’s system was marked by a change in style: Not only did the setting switch to sci-fi, but they apparently wanted to elaborate on the genre as well – the game’s cover identifies it as a “3D Active Adventure”. Actually, it’s barely more than a survival-ish adventure game with a few action sequences thrown in, but well… At least, the game has the merit to be the first 3D survival horror to feature real-time tri-dimensional environment. Also, it’s entirely dubbed.

So, the game starts in a cold room where a middle-aged guy named Raz wakes up from a cryogenization tube, confused as to who and where the hell he is. He quickly comes to realize that he’s trapped in what seems to be a gigantic hi-tech facility, and that his right arm seems infected by a strange, painful affliction that keeps on spreading. With the help of two comrades of fortune he’ll meet through his exploration of the complex, he’ll have to find the reason of his presence in there in the hope of discovering who he really is and, possibly, get the hell away alive.

It actually starts out okay. The game even features three camera angles – ensemble, back and first person – for your convenience, and it comes in handy to compensate for the controls’ rigidity. Other than that, it’s a very classical 3D adventure game: You’ll mainly have to fetch items and activate devices around the complex’s greyish environment. You’re not alone, though: You’ll soon be joined by a small robot called Pippo, who follows you everywhere and to which you can switch at any given time. Not only does its small size let it go through narrow openings, he also has special skills that allow it to activate mechanisms the main character can’t understand.

Later in the game, a mysterious woman will also join you, and you’ll be able to switch to her as well. However, this switch system is not used that much and that well during the adventure, which is a bit of a shame seeing how it was the game’s only vaguely distinctive gameplay trait.

And well, the rest is awful. Remember the “active” part in the game’s “genre” name? It refers to disparate sequences where the game switch to an action-oriented gameplay, without changing the controls. It still is sort of acceptable when it’s just about running or jumping, but the fighting scenes with zombies are barely playable and just unbelievably stupid. Never before did punching a mutant in the face with your bare fists ever made button mashing feel so stupid. 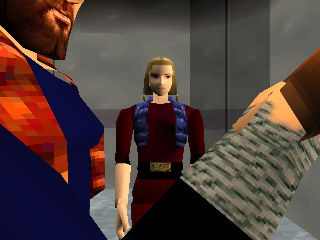 And don’t expect the gun you’ll pick up later on to save the day: Going into the inventory doesn’t pause the game, so you’ll inevitably get hit if you want to pull out your firearm. Moreover, firing that thing feels like you’re trying to shoot bullets with a potato, and most of the time you won’t even be sure whether you actually hit the target or not; which is more than an issue with so little ammo around.

But there’s worse: Milly. The girl. Up until her appearance, the staging and the acting were dull but somewhat decent. Her acting is terrible and its involvement in the scenario brings in a tornado of dumbness, including clichéd plot twists you could see coming from miles away. I can’t even think about the background music for her “romantic” dialogues with the main character without laughing: It’s the cheesiest saxophone I’ve ever heard in my life. Also, I know it was 1996, but the archaic character modelling only adds to the ridicule.

So, that’s it. OverBlood is only around six hours long, with two hours of uneventfulness and four hours of stupid. Who knows why the Riverhillsoft guys wanted to add “action” elements into their game when it clearly wasn’t adapted for it. Combined with campy story and uncharming characters, it makes for a pretty bad game.

Surprisingly enough, there was a sequel. It was released in 1998 in Japan and localized in Europe only almost three years later, for some reason. It’s a radical shift from the rather short, linear sci-fi adventure first title to a more thorough, nonlinear steampunk-ish actual action-adventure game. However, it’s also way too obtuse to be actually enjoyable, and rather glitchy as well – actually, a large quantity of European versions contained a game-breaking bug that basically made the game hang during a specific cutscene, thus rendering it impossible to complete. Way to go, guys.