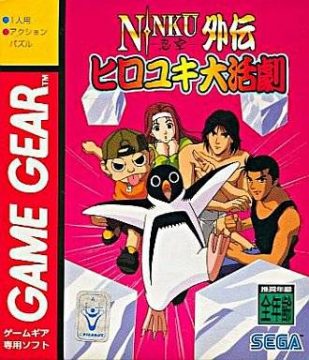 Sega created a Pengo sequel in the unlikeliest of places – as a licensed tie-in with the anime/manga Ninku. The basic gameplay is almost exactly the same, except the graphics and music are different, and you now play as Hiroyuki, the flatulent penguin. The playing fiels is smaller than the original Game Gear release of Pengo, since the sprites and blocks are larger. It’s a much more visually attractive game.

Enemies include walruses and octopi. There are bumpers around the playing field, which will bounce back any kicked ice block, potentially squashing Hiroyuki if you’re not careful. You can also fart and create a toxic gas cloud, which will temporarily stun enemies. In addition to the regular levels, where the goal is to kill all of the enemies, there are also Puzzle stages, where you need to kick blocks into a certain pattern, and Boss levels, where you need to kill a large enemy by tossing blocks at it. There are brief cutscenes every once in awhile, and the scenery changes every few levels.

Since subsequent Pengo games went off in different directions, this is probably the closest that Sega ever created to a true Pengo sequel. Note that there are two other Ninku games on the Game Gear published by Sega, though they are entirely different and are actually fighting games.