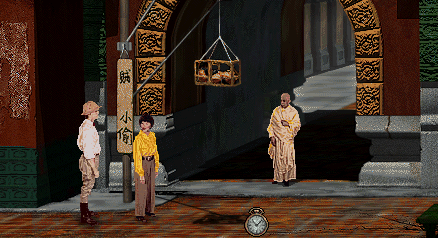 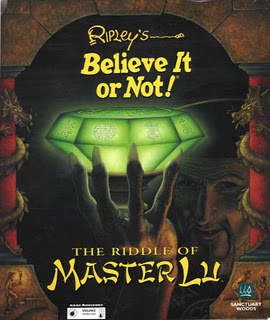 Believe it or not, Robert Ripley’s columns about strange and bizarre historical facts (or fictions) were, at one point, read by more than 80 million people worldwide. Of course, this was back in the 1930s – nowadays, they’ve just devolved into goofy picture books and a fast food-style chain of museums, all positioned in the most painful of American tourist traps. Nonetheless, Sanctuary Woods took it upon themselves to recreate Ripley as an Indiana Jones-style jet-setting knowledge seeker in their 1995 title Ripley’s Believe It or Not! The Riddle of Master Lu. 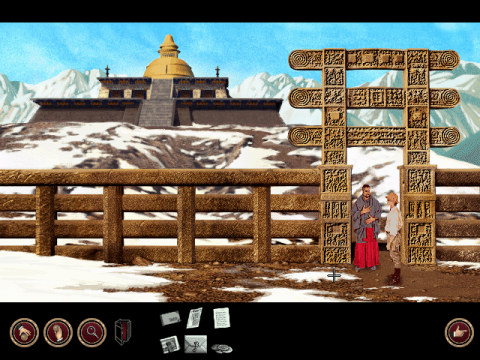 The year is 1936 and the world is once again on the brink of war. A series of bandits have broken into one of Ripley’s Odditoriums in search of a key to the tomb of the first Chinese Emperor, who had buried with him a mystical artifact that has the power to destroy the world. Ripley doesn’t have this key, but this burglary launches an investigation to China to discover this secret. It’s here where he learns of one Master Lu, who set out to explore the globe nearly two millennia prior and actually discovered the Americas long before any European. His goal was to find an elixir that granted eternal life, which he didn’t quite accomplish, but he did bring back a world’s worth of knowledge. Naturally, a number of obstacles stand in Ripley’s way. The world’s
current leading expert on Master Lu, the Baron von Seltsam, has recently passed away, requiring that Ripley uncover his secret laboratory to find the key. Furthermore, Lu’s wisdom is encoded in a tablet written in three different languages, all of which happen to be long forgotten. This triggers more world jetting as Ripley heads to three different locations: Easter Island, with its enigmatic Moai statues; a temple in Sikkim, located in the Himalayan Mountains, and Mocha Moche, a long lost city in the Andes.

Much like the original Ripley strips, there’s a considerable mixture of fabrications mixed
along with the truths – Master Lu did not exist, for example, but Qin Shi Huang, the first
emperor of China, who erased all historical documents prior to his reign to stress that he was the true beginning of the country, was most definitely real. This is by far The Riddle of Master Lu‘s biggest strength – there’s a substantial amount of detail paid to the history of the countries and cultures Ripley visits, almost to the point where it could potentially be construed as the dreaded “edutainment”. The screens, gorgeously rendered in SVGA, are filled with hotspots describing the local culture, and its denizens have their own customs and legends to impart. In general it’s a fantastic looking game, too. All of the characters are digitized actors, and while other games have attempted this, like Sierra’s Phantasmagoria and The Beast Within, The Riddle of Master Lu ends up looking the best of them, even if the animation is still a little stiff. 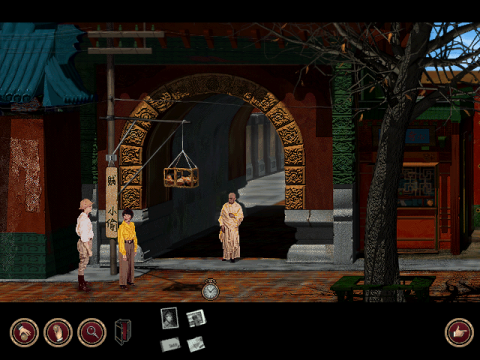 But while the global studies lessons are more interesting than a typical text book, the
narrative is far from the pulp adventure fantasy it wishes it were. Ripley is, to put it lightly, a bit of a weenie, wearing an obnoxious, wide-brimmed hat and an incredibly dorky bow tie. He is enthusiastic but bland, which can be applied to the supporting characters as well. His girlfriend, Mei Chen, is a cunning, beautiful master of martial arts, but their relationship is devoid of conflict, and thus anything interesting. Dr. Samantha Twelvetrees is a female archaeologist with a little more flair, but not enough to really keep things interesting. The writing is average, and the voices are tolerable, although none of the actors ever sound like they’re really comfortable.

The interface proves to be the game’s most frustrating obstacle. The character movement is ploddingly slow, there’s no way to skip through any of the long winded dialogue, and there’s no option at all for subtitles, which all work together to make the adventure feel much longer than it really is. And unlike nearly every other single game that uses an icon-based cursor, you can’t cycle through commands with the right mouse button, instead requiring that you click the menu on the bottom of the screen every single time. 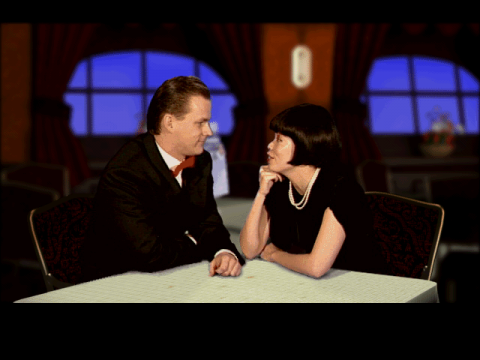 Puzzle design isn’t exactly the game’s forte either. The first involves distracting a scrap
metal obsessed vagrant by taking an army helmet and chucking it on a rooftop. In order to infiltrate an ancient society of monks, you need a ring which signifies years of dedication and study. Well, obviously that would take far too much time, but the coincidentally the wrapper on a cigar halfway around the world looks suspiciously similar, and the wise monk apparently can’t tell the difference. The most difficult one involves trying to swindle an emerald lodged inside of an incredibly complicated, Rube Goldberg-esque bit of machinery. It requires an expansive, multi-step solution, resulting in several attempts of trial and error to fiddle with it until you finally pop it loose. It’s somewhat similar to the infamous Babel Fish puzzle from Infocom’s The Hitchhiker’s Guide to the Galaxy, although thankfully you get unlimited tries. If you’re down with
pixel hunting, there’s also a running subquest to find wacky items and sketch interesting
locations, which will bring in revenue for the museum and get your creditors off your back.

The Riddle of Master Lu is one of those games that works brilliantly as a travel advertisement. The visuals are easily the best part of it, and it really is quite fascinating to explore the ancient secrets hidden within these mystical lands. Sadly, the rest of the game doesn’t offer much beyond touring these exotic locales, resulting in a game that falls short of its potential. There was a sequel planned, to be subtitled The Siberian Cipher and focusing on the Tunguska explosion, but was scrapped due to the sale of Sanctuary Woods to Disney.