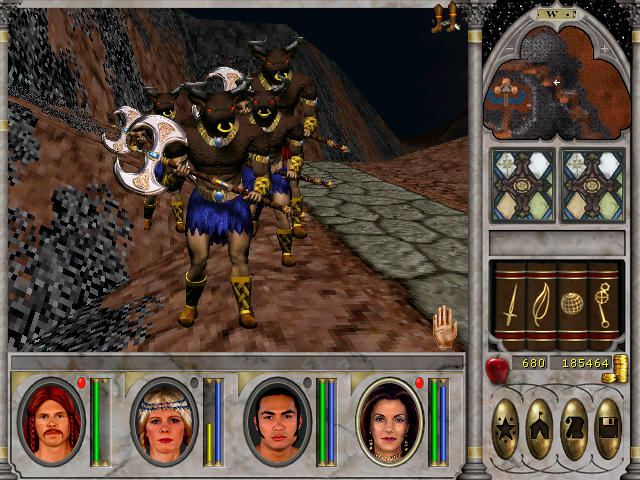 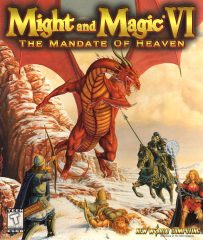 Might and Magic VI brings more significant changes than ever from earlier installments of the series. In the five years that had passed since Might and Magic V was released, computer hardware had progressed a great deal. The first-person shooter genre, which was in its infancy in the time of the last Might and Magic games, had entered the mainstream.

Several RPGs had already taken the first person perspective established by the likes of Wizardry and Might and Magic into a realtime 3D framework to make gameplay more fluid. Perhaps most notable of these were the Ultima: Underworld games (the first of which predated Might and Magic V), and the Elder Scrolls series (whose second game, Daggerfall, was released in 1996).

The game is set in the Kingdom of Enroth, where a meteor shower has lead to a plague of demons being released upon the land. Roland Ironfist, the canonical winner of the Succession Wars in Heroes of Might and Magic II, leads an army against the demons but is betrayed and goes MIA. It now becomes the task of a new party of heroes to end the demonic invasion and save Enroth. 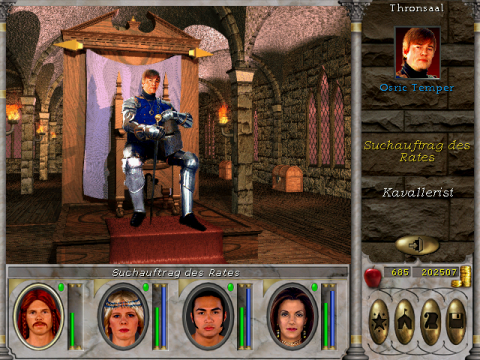 In the course of the campaign, the Kreegan are introduced as the series’ antagonists, and it is established that they are the enemies the Ancients were fighting in the Might and Magic universe’s distant past. Aside from the Kreegan as a link to the old games’ mythology, none of the Nacelles from earlier games appear again, and the world of Might and Magic VI is explicitly depicted as being spherical, as opposed to the flat space-borne nacelles of the earlier games.

Might and Magic VI features a brand new 3D engine, which allows players to switch between real-time and turn-based combat at any time. In real-time mode players may move around as they wish while fighting fodder enemies, but the player has to think quickly, because monsters attack in real-time as well. In turn-based mode, players have time to consider their actions, but can’t move.

As has become genre standard by the time of its release, the game includes an automap by default, which is good, as the world is dramatically expanded over earlier titles. While those were limited to a matrix of inter-connected 25-by-25 squares, the world here has no such boundaries or connections, and dungeons are no longer limited to straight lines and clearly divided stories. Dungeons also have dynamic lighting, and the party has a light source by default, though light spells help to expand the size of the lit area.

The size of the player’s adventuring party has been reduced to four slots. All of the standard fantasy races like elves and dwarves are unavailable, as they don’t normally live in Enroth, so the party consists always entirely of humans. The number of classes available has also been reduced, with the archer and thief being lumped together. The designers compensated for this by revamping the skill system. Where earlier games split skills between class specific ones like Thievery, and skills that all characters could be taught by trainers (like swimming and navigation), now every character can learn all skills, with a few exceptions (Wizards and Archers can’t learn clerical magic, and the reverse is true for Paladins and Clerics with arcane magic). Further, as characters level up, they get skill points that can be invested into their skills to improve their abilities. To really become Experts or Masters in any given field, characters have to consult special trainers, with the master trainers often hiding away in rather obscure places. 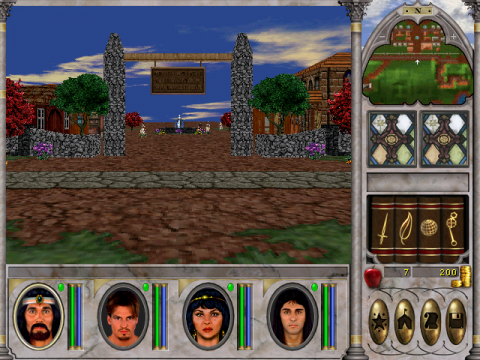 The inventory system has also been completely overhauled. In place of a hard limit on the number of items in a character’s inventory, the inventory screen comes in grid form, with each item taking up a number of slots according to its size. The specifics of each item can be viewed by right clicking on it, as soon as it has been identified once.

Unfortunately, there are some flaws with the new engine. In the earlier games, all locations had a coordinate address, either in the form of a four-coordinate address for overworld locations (Sector A, 2 – Square 12, 8), or a two-coordinate address for towns and dungeons. This made it easier to find where you needed to go, be it for a quest to contact the quest-giver afterwards. As the world of Might and Magic VI isn’t grid based anymore, there are no coordinates for the player to reference, either. There are also no arrows on the map to tell you where you need to go (as in the latest Elder Scrolls and Fallout games) either, making it difficult to find out exactly where you need to go.

Also, the graphics engine really hasn’t aged well. All the NPCs and enemies, as well as many stationary objects like trees and rocks are represented with sprites. While the animate beings have alternative views when facing them from the side or from behind, trees rotate to look the same from whatever side they’re viewed at. Also, while environments are three-dimensional, with hills and valleys, for the first time in the series, some slopes enemies can pass, but not the player. Even the flying spell has a maximum height, making some mountains literally insurmountable. Finally, on modern computers the game will crash when trying to multitask (such as to look up a map on the web) and cannot be run in windowed mode, either. For some reason the music and spoken dialog cannot be turned off separately.

That said, the game did a good job of updating the Might and Magic formula in its time, though regrettably it hasn’t aged as well as earlier titles in the series.