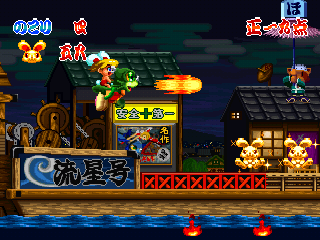 Keio Yugekitei Katsugekihen (or “Keio Flying Squadron: Action Chapter”) is a bit of departure from its predecessor. Katsugekihen is a side-scrolling platform game, although there are a few stages where you jump on Pochi’s back for some shooter action. Like its predecessor, it’s pretty standard for the genre – you run, you jump, you collect 100 golden rabbits to get an extra life. In spite of her scrawniness, Rami can lift pretty much anything that isn’t nailed down, including kappas (demons which act as springs to reach difficult places) and raccoon statues (don’t think they serve any purposes.) Occasionally you’ll run across weapons too – hammers can be used to thwack baddies, and bows can be used to shoot arrows. Umbrellas can also be used to attack, but are more appropriate to make controlled descents or protect yourself from raining boulders. As long as you’re carrying some sort of item, Rami is pretty much invincible, but getting hurt makes you drop whatever you’re carrying. Similar to the Sonic games, it’s pretty hard to die unless you’re really trying, or accidentally fling yourself into a pit.

The 2D powerhouse that is the Sega Saturn allowed for colorful, extremely detailed sprites. Rami is totally out of proportion and has an enormous head, but she carries a goofy, dimwitted smile as she marches through each gorgeous stage, hopping on bad guys and jumping over pits. Even the bad guys are amusing – you see them taking lunch breaks in the background, watching as their hapless brethren are bopped into submission. And much like the original, you can count on some ridiculous boss encounter (one is a blob that sticks a pencil up its ass and and attacks by spinning around – you’re supposed to attack him while he’s busy vomiting from dizziness.) The art style used in the cutscenes is a little rough, and the opening FMV suffers from horrible compression, but they’re charming nonetheless. As an incentive to replay, there are tons of bonus artworks that can be unlocked as you rack up higher scores.

Despite its simplicity, Keio Flying Squadron 2 is still pretty fun, and makes you wish you saw more 2D 32-bit side scrollers. While it was never released in America, it did see a European release under the name Keio Flying Squadron 2. The game is so extremely Japanese that even the score is tallied in kanji, which makes its localization all the more puzzling, but nobody’s really complaining. Still, it’s easier to find the Japanese version than the European one, and the game isn’t text heavy anyway.