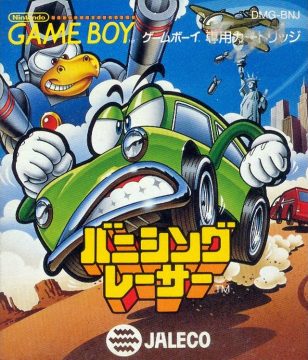 The Game Boy had no shortage of platformers, even in its earliest years. From classics like Super Mario Land to creative experiments like Gargoyle’s Quest, there were always worthwhile ones to play. While most efforts never quite matched the gold standard set by Nintendo, many of them at least did something interesting, and Banishing Racer, developed by Jaleco exclusively for Japan in 1991, is no exception.  Banishing Racer features a car as its protagonist and uses this decision to its advantage by incorporating both mechanics and level design that encourage speed and momentum in order to create a unique experience.

While minimal, the story for the game is entertaining in its absurdity. An introduction shows a car being rescued from the scrapyard with the help of a fairy’s magic. In order to reunite with the fairy, the car must travel from San Francisco all the way to New York City in order to find her. It’s an odd premise with no dialogue to help make sense of it and it ends on an utterly strange note that only raises further questions. The lack of text makes it import friendly, but there’s a fan translation available for the credits and some other graphics in the game.

Since you play as a car, the controls of the game take some getting used to. Whenever you move, it takes a moment for the car to hit full speed or stop completely. You’re always facing to the right as well, even when moving in reverse. The only way to defeat enemies is by jumping on them, which feels unreliable as it’s harder to determine safe zones when you have a wider than normal character. Anything you come into contact with will kill you instantly and losing all of your lives kicks you back to the first part of a given stage (each stage has three parts). All of this sounds like a recipe for a mediocre platformer, but it’s redeemed by the inclusion of a very clever boost mechanic.

By pressing the B button, the car will get a brief burst of speed. The boost has a minimal cooldown and can even be done in the air (though it can’t be done in reverse), granting skilled players precise control at all times. You’re encouraged to boost regularly, between things like hazards that require specific timing to avoid and a timer bonus that grants more points the faster you can finish a stage. Better yet, the game rewards players who master boosting in the air by granting an extra life every time four enemies are defeated in a row without touching the ground. Players who have mastered the game will be able to rack up multiple lives per stage and blaze past all of the game’s hazards in stylish fashion.

Most of the enemies you’re pitted against include other vehicles, such as trucks, cars that can also jump, and motorcyclists who move a bit faster. These enemies make up the bulk of what you encounter, but the real highlights are the oddities exclusive to specific stages. Stage 2-3 obstructs you with a blatant Donkey Kong ripoff who naturally throws barrels at you. A drive through the idyllic countryside of Denver in stage 3-1 changes into a nasty surprise when a UFO comes out of nowhere to suck you up with a tractor beam! Stage 5-2 has you travel through a subway in New York City full of turtles wielding nunchaku, an obvious reference to Michelangelo of the Teenage Mutant Ninja Turtles. The bosses are unfortunately underwhelming, with only three in the game. They’re all defeated by jumping on them enough times, though they at least try to protect their weak spot. The final boss is interesting in the way that it gradually transforms from a tank into a bipedal bird robot as the fight goes on.

Banishing Racer also shines in the way that it constantly introduces new stage ideas to go along with its weird ensemble of foes. There are five stages in the game based on different cities within the USA. San Francisco is the first level and therefore the tamest, but it still has dangers such as a bomber plane that blows up a bridge you’re driving along. Las Vegas is the second stage and includes killer slot machines and flashy casino signs, some of which can even be used as platforms. Denver mostly takes place along a rural road with farms littered throughout, but also has a part dedicated to flying through a spike-filled cave. The game’s interpretation of Detroit is… bizarre to say the least, with the first part of the stage being covered in waterfalls and a continually rising water level. The second part of Detroit takes you underwater entirely and the final part of the stage has you going through a factory filled with deathtraps. When the player finally reaches New York City, they’re treated to a nasty gauntlet of enemies and auto-scrolling platforming sequences alongside a lovely nighttime background reminiscent of Jaleco’s own City Connection.

The graphics of Banishing Racer aren’t anything special on their own, but they’re elevated by some great animation touches and impressive visual effects. The protagonist is pretty cute and has a range of expressions, such as the way he scrunches his face when braking or becomes exuberant after completing a level. Bosses are introduced in the dark with a spotlight over them as they rise up from ground, giving their appearance some welcome dramatic flair. When transitioning into a stage or finding a hidden room, the screen will compress itself and then stretch back out, which is a pretty neat and flashy way to introduce a stage. Perhaps the most impressive visual effect of all is during the underwater sequence in stage 4-2, where the screen undergoes a constant wavy effect that helps simulate the feeling of being underwater. The introduction and ending both contain large, detailed sprites with some smooth animations and visual effects, such as the way the car rotates 360 degrees to look at the Statue of Liberty during the ending sequence.

The music of Banishing Racer was one of the earliest works of Jaleco composer Yasuyuki Suzuki, and it’s a decent if ultimately unremarkable batch of songs. The tracks are generally upbeat in nature and fit the cutesy look of the game. The track played for San Francisco contains a tone of hopefulness in its higher pitched notes, which feels fitting for the start of a journey. The songs played for Detroit and New York City both start with a riveting series of drum-like sounds that help set the tone for the more intense nature of these stages. While most of the music does a fine job of setting the mood, the music for stage 4-2 is a mess, with an extremely short loop of dissonant sounds that feel out of place and distract from the action.

While Banishing Racer was never officially released outside of Japan, it was included in the Retro-Bit Generations plug and play console released in 2016. It’s just a ROM of the game played in a no-frills emulation box, but it’s much cheaper than importing the cartridge. There were never any follow-ups to Banishing Racer, but there was a spiritual successor of sorts in the form of Tryrush Deppy on the Sega Saturn. It’s made by a completely different developer (a company called System Supply N-Tech), but it also happens to be a 2D platformer starring a car traveling across the USA that costs a small fortune to acquire nowadays – a pretty funny coincidence!