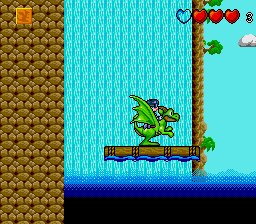 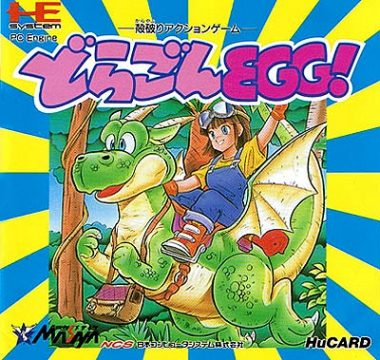 NCS/Masaya are best known for creating the legendary Langrisser series and the bizarre Choaniki games, but they developed many other games during their existence both in and out of their usual genres. Among these was Dragon Egg, a cute and simple platformer with a couple of cool ideas.

The Kingdom of Konigst once lived peacefully in harmony with dragons, to the point where a legendary dragon was ridden by someone called ‘the dragon master’. But this tranquility was shattered with the arrival of Chaos, and the dragons soon became extinct. That is, except for one single egg. This egg has been handed to Eran, a young girl and the last living descendant of the dragon master. Only she can hatch the egg, and perhaps together, they can defeat Chaos and restore Konigst to peace. 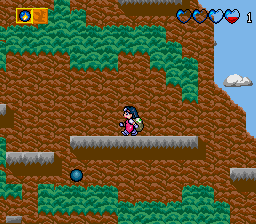 Dragon Egg is a 2D platformer where you jump and attack enemies as you make your way through linear stages. You start off only being able to hit enemies up close with the dragon egg, but you can find fire orbs dropped by dead enemies. When you collect enough of them, the egg hatches and the dragon will breathe fire from a distance. Grabbing more orbs causes the dragon to grow up, gradually increasing the range of your attacks and even giving you a slight hover at the highest level.

This focus on strengthening your character over time is further emphasized by upgrades to your max health and attacks, which can be bought in shops alongside potions, shields and screen clearing bombs with coins. It adds a nice twist to an admittedly basic game, though that simplicity is also part of Dragon EGG’s charm. The gameplay is easy to understand, and the controls are enjoyably responsive, so anyone can get into it without much hassle. This is further backed up by a variety of level designs, with some going for a gauntlet of enemies, while others present a mix of navigation and platforming to keep you on your toes. 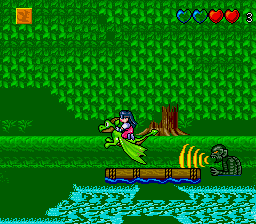 That said, the level design starts to falter over time. Earlier levels are much longer, and after the complex maze in the third stage, the following levels are much shorter and simpler – with one of them just being an auto-scrolling combat section where you dodge attacks on a raft until you reach the boss. While it makes for a nice change of pace, it also results in the game’s second half feeling more anticlimactic and sudden in a way that doesn’t really work.

In regards to the bosses you’ll face at the end of each level, they’re generally quite good in providing challenging attack patterns that you’ll have to work out and dodge in order to get some hits in. However, they can become quite tricky if you die, because dying at any point removes most of your upgrades and reverts your dragon back to an egg. While most levels are designed to be beaten with no upgrades, this can put you in a tough spot for some of the boss fights and a handful of sections where you’re clearly needed to be even slightly more powerful to get through. It makes the game significantly harder, perhaps maybe too hard at certain points to be beaten reasonably. 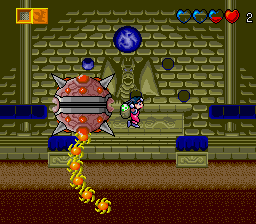 For what it’s worth, you do keep your health upgrades, you have unlimited continues, and you’ll always begin in the section you died in regardless of whether you lost a life or a continue, so you are allowed to keep trying until you figure it out. But if it still feels too much, you can go for the Easy mode in the main menu. Here, you still lose your upgrades but your dragon will remain at whatever state they’re in until you lose a continue. Enemies take less damage and leave behind fire orbs/coins more frequently, and these changes combine to make for a radically easier game. You can also play on Hard if you’d prefer something considerably more masochistic, where getting hurt removes a fire orb from your supply, enemies take a lot of damage, and rarely leave anything behind. You won’t be locked off from any levels, and it’s a short enough game that’ll take less than an hour to beat, so feel free to pick whichever difficulty suits you.

Regarding the presentation, Dragon Egg stands out quite nicely in its visuals. Sprites are very expressive and readable, levels offer plenty of settings from deserts to forests to mechanical fortresses, and there are a handful of well-rendered effects such as scrolling clouds and rushing rivers that make each location more immersive. Combined with a solid framerate and an opening sequence full of beautifully rendered stills, and you’ve got an attractive looking and playing game. The audio isn’t as strong, but it’s still decent. The sound effects are suitable for their actions and never grate on the ears, while the music by D. Takahashi and M. Hashimoto is pleasantly arranged to provide a variety of nicely composed tunes to keep things interesting. 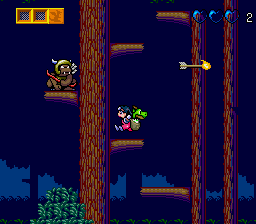 Dragon Egg never saw release outside of Japan, and has mostly been forgotten compared to NCS/Masaya’s other games. However, it did receive a re-release on the Japanese Wii U Virtual Console in April of 2017, as one of the last PC Engine games added to the service alongside other Masaya projects like Moto Roader MC and Hisou Kihei X-Serd. The game’s cover art was drawn by Katsutoshi Fujioka, an illustrator best known in video game circles for doing the character designs and Japanese cover artwork for the SaGa/Final Fantasy Legend trilogy at Square.