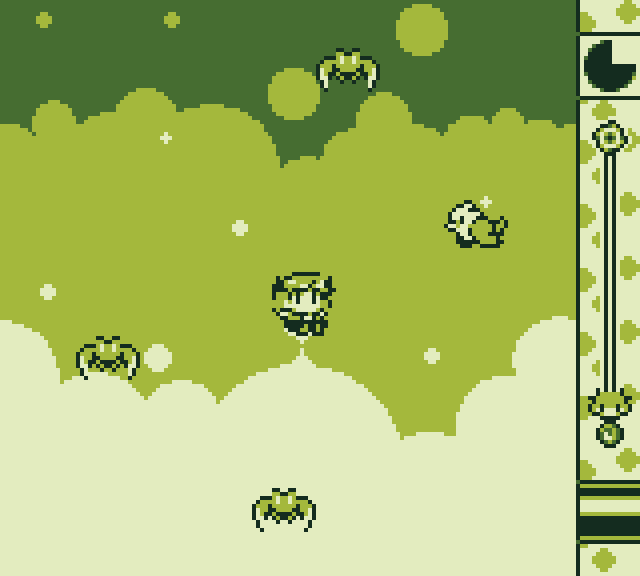 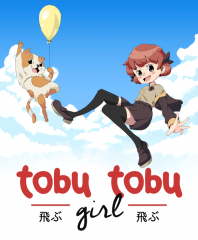 Your first impression of Tobu Tobu Girl, Tangram Games’ homebrew Game Boy title from 2017, might be something along the lines of: “Hey, that looks like Nintendo’s Balloon Kid flipped 90 degrees!” Although Lukas Erritsø Hansen and Simon Larsen, the two guys who make up Tangram Games and who made (with some musical assistance from an artist named potato-tan) Tobu Tobu Girl, swear they didn’t know of Balloon Kid’s existence until after their title was released, the two share a number of similarities nonetheless. Both star plucky girls. Both begin with loved ones – a brother in Balloon Kid, a cat in Tobu Tobu Girl – carried away by balloons. Both feature gameplay that regularly makes you feel like you’re a pinball ricocheting around the screen.

That’s about where the similarities end, however. Whereas Balloon Kid is a unique spin on the side-scrolling platformer genre, Tobu Tobu Girl is an arcadey, twitchy, high-score-chasing affair that’s akin to Ferry Halim’s Winterbells. Much like that 2006 effort, the main objective in Tobu Tobu Girl is to quickly climb the screen by bouncing off anything and everything in your path. In Winterbells, that means bells and birds; in Tangram Games’ title, it means birds, bats, ghosts, and even aliens. 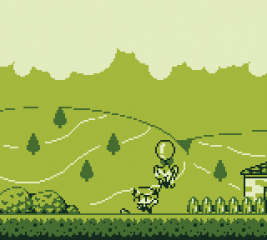 Don’t worry, Tobu Tobu Girl does more than just add a couple of new enemies into the mix. For starters, you do more than control the direction in which the nameless protagonist moves while playing Tobu Tobu Girl. By pressing the Game Boy’s A button (along with a particular direction on the d-pad), you can cause her to “dash” up to three times, too. Or you can press the B button to “boost” – fly, basically – for a limited amount of time. And dashing down into an enemy lets you stomp them.

Why would you want or need to do any of these things in Tobu Tobu Girl? One reason is it’s generally impossible to reach a stage’s goal-cum-portal by relying entirely on bouncing. There are times when you have to dash once or twice – if not boost for a bit–to reach the next enemy. Another reason: finishing a stage is only half the battle in Tobu Tobu Girl. To improve your rank – handed out at the completion of a level–you need to reach the portal quickly plus stomp a lot of enemies along the way.

Tobu Tobu Girl is tough enough that most people will focus on simply conquering each level at the start. Once you conquer a couple of them, though, you may decide you want to do so more quickly or receive a better score as a reward for the accomplishment. To do that, you’ll have to perfect the moves mentioned earlier – dashing and boosting, in particular. Thankfully, all of these elements both feel like butter and gel beautifully in practice. To put it another way, when you fail to finish a stage – and you will, over and over and over again – it’s almost always because you made a wrong move, not because the game’s controls are stiff or slow or clunky. 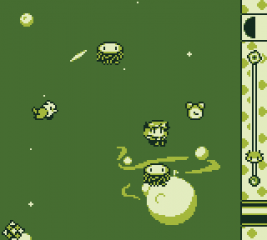 Which isn’t to suggest Tobu Tobu Girl is about tight controls and nothing else. Although its visuals aren’t exactly flashy, only those with questionable taste would describe them as anything even approaching boring. On the contrary, comparing them to the kind of simple, adorable elegance HAL Laboratory produced with alarming regularity during the 1990s wouldn’t be out of the question for most.

And then there’s Tobu Tobu Girl’s soundtrack. Attempting to master the four stages offered up here is a thoroughly exhilarating and enjoyable experience rather than an excruciating one thanks in large part to the bouncy, boppy, and buoyant tunes–all composed by the aforementioned potato-tan–that support each of them.

Potato-tan’s soundtrack is sure to be a standout of the forthcoming Tobu Tobu Girl Deluxe, too. As you might expect, Deluxe is an enhanced version of the 2017 title discussed up to this point. Specifically, it’s Tobu Tobu Girl in color (and now playable on Game Boy Color systems), though Hansen and Larsen promise it’ll include a few other graphical tweaks, too. To learn more about it, and even support a physical release of the game, check out the Tobu Tobu Girl Deluxe Kickstarter, which runs until May 4, 2019.