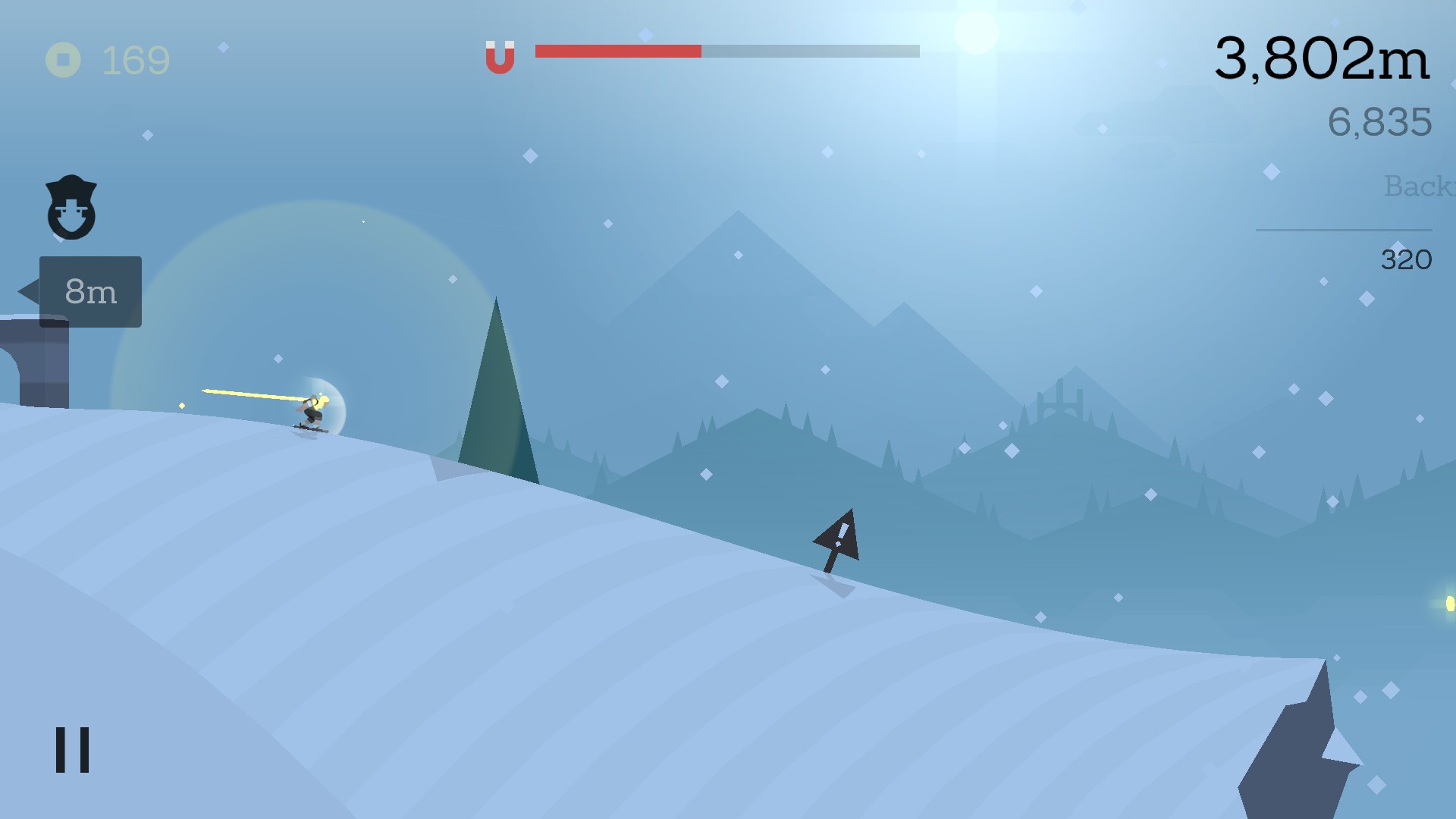 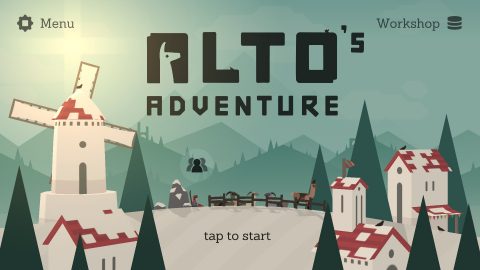 If there’s any genre that was defined by the mobile gaming boom of the late 00s/early 10s, it’s the endless runner. The simple concept of running through an endless randomly generated level full of obstacles and collectibles for as long as possible resulted in many games, both from independent studios and big-name companies. However, too many of them suffer from overly complicated controls and mechanics for touchscreen devices that result in unintuitive experiences full of cheap deaths. That’s why it’s worth celebrating games like Alto’s Adventure, a collaboration between UK artist Harry Nesbitt and Toronto-based developer Snowman that features elegantly simple gameplay that anyone can enjoy.

Alto’s Adventure has you snowboarding down an endless mountain, where all you can do is jump by tapping the screen and perform a backflip by holding the screen mid-jump. However, this isn’t automatic, so you’ll have to consider whether you have enough time to backflip before you hit the ground. Jumping is very important, since it allows you to jump onto rails, over rocks and fireplaces (and onto them if you time it right), and is used to tie these various tricks together to create combos. Getting a good combo gives you momentum, which grants you the boost in speed needed to break rocks and jump over the vast chasms scattered across the mountain. 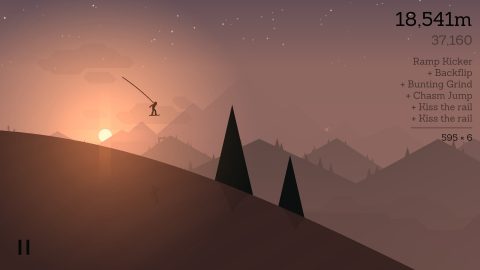 Keeping your momentum up is also crucial to avoiding the mountain elders who occasionally chase you, as they can knock you out and end your session just as swiftly as crashing into rocks, hitting the ground when not upright, or falling into a chasm. You can resume your session, but if only you’ve collected enough of the coins found all over the mountain. Otherwise, you can use coins to buy or upgrade power-ups, such as the coin magnet, a finicky hover feather that lets you glide over rocks, and the wingsuit.

When you have enough momentum, your scarf will glow white and an icon will appear onscreen. Touching it activates the wingsuit, letting you glide for a short time by periodically holding the screen, and can be used to pull off loop-de-loops, correct bad jumps, and string bigger combos. The meter gradually depletes, but can be replenished by deactivating it and regaining your momentum.

The wingsuit has to be unlocked, and is one of many unlockables in the game’s level system. By completing a trio of randomly assigned goals, you can level up and unlock not only new power-ups, but new characters. You start with the all-rounder llama farmer Alto; before unlocking Maya, who builds up less momentum but flips much faster; Paz, who gains a lot of momentum despite being slow; Izel, a young inventor who can reach ridiculous speeds with her prototype rocket booster; Felipe, one of Alto’s llamas who has taken to snowboarding and can get extra height with a small double jump; and Tupa, a strange elder who has everyone’s strengths and abilities. 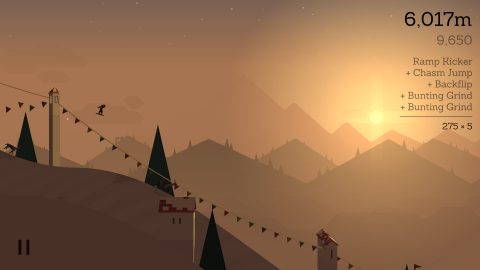 The goals include a wide variety of tasks such as pulling off tricks, collecting enough coins, or reaching a milestone, and are quite clever in how they challenge your understanding of the game’s mechanics. However, some goals are a bit too difficult, with tasks that require either a lot of luck from the level design (pulling off huge combos) or take far longer than a casual session to beat (survive for two in-game days). While you can skip goals by spending coins, the way you can only complete a set three to level up and their inconsistent difficulty makes them feel a bit too much like they were designed to get you spending coins.

(It’s worth mentioning that the Android version is free, but has an in-game store where you can purchase set amounts of coins with real money. There are also ads that periodically play when you die a few times, and you can even watch ads to double the amount of coins you’ve gained. You can pay to remove the ads, though this obviously isn’t the case with the paid iOS version, or the later console ports.)

But whether you’re completing goals or cruising down the mountain, it’ll still be a joy thanks to how solid Alto’s Adventure is. Because the inputs are so simple and every mechanic is tied together, it’s very easy to get into but inherently complex enough that it will take some time to master. The controls are responsive and there’s an appropriate amount of weight and momentum, which lets you intuit when to time your moves and when to save them for better opportunities. This means that when you pull off a big combo or screw up and crash headlong into a hill, that’s because of your skill and not random chance. 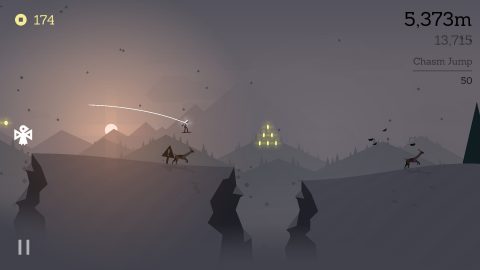 Admittedly, the level design doesn’t always gel with that, mostly due to its randomly generated nature occasionally resulting in gaps and obstacles that can kill your run. Thankfully, things are often spaced out far enough that you can gain momentum and overcome just about anything if you know what you’re doing. The power-ups act as safety nets if you’re having a hard time, and you’ll easily be able to unlock at least one other character with stats that might suit your playstyle better. Overall, this is one of those games where just playing it is fun enough to last for hours, and that’s something the game acknowledges with its alternate mode, “Zen Mode”. Here, you can just go down the mountain for as long as you like. You’ll instantly recover from crashes and there are far fewer hazards, letting you take in the atmosphere of the mountains provided by the presentation.

Alto’s Adventure has a striking artstyle provided by Harry Nesbitt, with a focus on minimalist landscapes and gorgeous color schemes to convey the feeling of snowboarding down enormous mountains and taking in the world around you. Details such as a day/night cycle and dynamic weather serve to enhance this feeling, but the game always puts clarity first. The camera pulls out when you speed up so you can see what’s ahead and all the important elements are given a glowing color or a distinct silhouette to remain legible at night. Combined with a smooth 60FPS, it makes for a game that both looks and plays wonderfully.

The world is made even more tangible by the excellent sound design, which provides a collection of audible sounds that give every action the impact it needs, along with ambience for the mountain and the various weather conditions. There’s nothing quite like snowboarding through a thunderstorm at night, seeing the lightning crack in the distance and then hearing the boom of thunder roaring around you seconds later. It provides a powerful atmosphere like few games can, to the point where it’s worth playing the game with the music turned off. 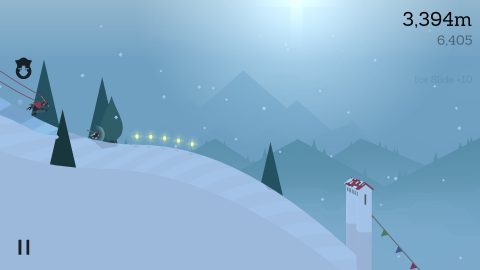 That’s not a strike against the music, mind. Composed by Brian Crawford (ShinnyMetal) and Torin Borrowdale, the soundtrack provides an appropriate mood to what you’re doing, starting off with a minimalist piano melody before introducing more instruments to match the increasing complexity of your run. The only issue with it is that since there’s only one music track per mode, it gets repetitive on the ears very quickly. (The music for “Zen Mode” is predictably more laid back and fits its relaxed vibe quite well.)

Alto’s Adventure is a superb, accessible entry in the endless runner genre, so it’s not shocking that it became a hit in the Apple and Android markets. In fact, it was so popular that the developers made a sequel a few years later to introduce new concepts while keeping the same simple, but complex gameplay, known as Alto’s Odyssey.

A blog written by Harry Nesbitt looking at the creation of Alto’s Adventure: http://www.harrynesbitt.com/blog/the-making-of-altos-adventure/