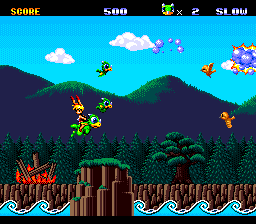 Japan has no shortage of weird, quirky games, but it is unusual when you find one granted a green card for other shores – ranging back from such oddities as Kabuki Quantum Fighter to the NES to Katamari Damacy for the PS2. One of the most obscure of obscure release is Keio Flying Squadron. Released in the dying days of the Sega CD by Victor, Keio is a light-hearted, cutesy shooter that was unashamed of its Japanese origins, from a time where having anime-style artwork on the cover was still unheard of.

Keio gets it name from the Japanese era in the 19th century between the Genji and Meiji eras. The game is supposed to take place during that period, but it’s still filled with wacky anachronisms. While these are the only two “real” games of the series, apparently there was a board game called Ranma-Chan no Ooeto Surogoku: Keio Yugekitai Gaiden for the PlayStation.

Keio Flying Squadron begins with an FMV intro that details the elaborate history of the game world. However, this has absolutely nothing to do with the game, which focuses on the Keio Yuugekitai. This squadron is made of three people – Rami and her two grandparents. They don’t do much of anything except sit around and guard this Special Holy Object, which is really just an oversized key. Unfortunately, they aren’t very good at guarding, and the key gets whisked away by the nefarious Dr. Pon, a raccoon with the IQ of 1400. Rami transforms into her rabbit costume (for no justifiable reason) and sets off to retrieve their treasure. Despite the implications of having a heroine that looks like a Playboy bunny, Keio Flying Squadron is actually 100%, family friendly, squeaky clean.

As far as shooters go, it’s pretty standard stuff – you have a primary weapon that can be powered up a few levels, and a multidirectional shot as well. Two tiny dragons also act as options, supplying extra firepower. If you’re missing these little helpers, all you need to do is stop shooting for a few seconds and they will magically appear out of thin air to help. There’s nothing really spectacular gameplay-wise that make Keio stand out, but it does have plenty of personality. Almost all of the enemies you fight are evil raccoons, either attacking on foot or riding some crazy machination. While not as crazy as Parodius or Cho Aniki, there’s some memorably wacky stuff, especially the fish-human who commands several bosses, including a giant mech with big googly eyes.

Other than the goofy bosses, the graphics are pretty mediocre. While the artwork in between levels are amusing, the in game graphics lack detail and obviously suffer from the low color palette of the Genesis. The music is impossibly upbeat and unnecessarily catchy, and the voice acting doesn’t take itself too seriously.

The fact that such a unique Japanese game was actually translated into English is what garnered this one a cult following. Unfortunately, this has led to inflated prices on the secondary market Keio Flying Squadron is pretty good, but like many of these scenarios, really isn’t great enough to warrant the prices it goes for.