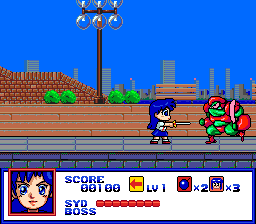 Valis SD is a weird release. It’s essentially Valis II, but it’s one of these Japanese games where they like to draw everyone super cute and suffering from dwarfism. It’s largely based on the TurboGrafx-16 game, although it adds the weapon and armor selection from the computer versions. It even has its own exclusive outfit, a china dress. It’s also the only game in the series where Yuko can fire upwards. Maybe in order to keep with the SD theme, the physics feel sloppy and nothing seems to have much weight to it. The level design is actually improved a bit, but still rather on the dull side. 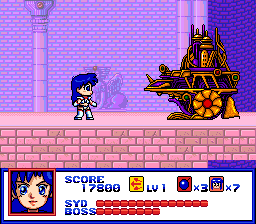 In place of the cinema cutscenes, SD Valis has just the character sprites talk in-engine via text boxes, and they always say ridiculous things. Oddly enough, now that the dialog is intentionally stupid, it’s still not as hilarious as the “serious” English dub on the TurboGrafx-16. In the US, the game was renamed to Syd of Valis, apparently for no other reason than the word sounding somewhat similar to “SD”. But Telenet’s US subsidiary Renovation Products didn’t stop there: The heroine Yuko was also renamed to Syd, and it sounds even weirder when attached to a female character. Unlike the other English versions of Valis, Renovation opted to use cutesy artwork that doesn’t hide its Japanese origins, though it’s not actually from the Japanese version of the game, but rather a different Telenet game.