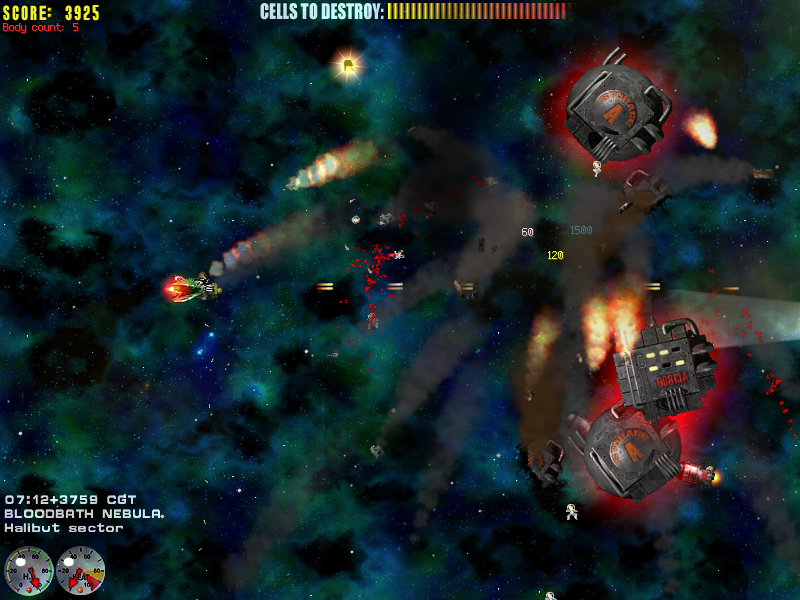 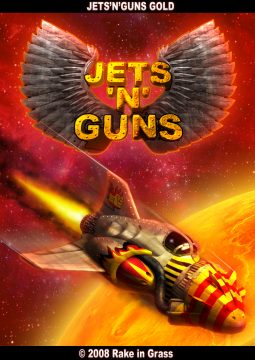 The euroshmup has never been as appreciated as its sibling overseas. While practically every game player with an interest in retro has heard of Gradius or R-Type, only those who knew their way around a DOS prompt could tell you about a game like Tyrian or Xenon. Today, the euroshmup is far worse off than its Japanese counterpart, only kept alive with occasional releases like Dux and Soldner-X. On the bright side of things, Jets’n’Guns is an attempt by a small indie company called RakeInGrass to make something in homage to those old DOS shooters, and they end up doing a pretty respectable job.

The game has little to no plot, with the flimsy premise of a dictator trying to, surprise, blow up the universe only introduced about a half-dozen stages or so in it’s just an excuse to go to places and blow the hell out of everything, and compared to the overwrought stories of games like Radiant Silvergun or Einhänder, it’s all appropriately cheesy. Even before you purchase a flying hot dog van equipped with railguns and missiles. The game calls itself “The Ultimate Firey and Bloody Experience” on the title screen, and that’s not entirely inaccurate.

The other major difference most euroshmups have over other games that Jets’n’Guns borrows is that there isn’t much in the way of powerups. You’ll find armor pickups to restore your rapidly dwindling health, but that’s about it. Instead, you do your powering up in the shop between missions, using the cash you earn at the end of each level. This is more or less the main gimmick of the game, and where most of the strategy of the game comes into play. 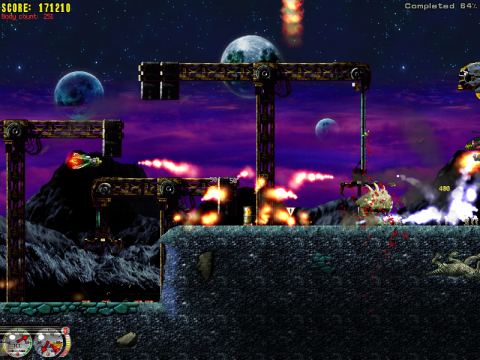 In the shop, you can choose from a variety of weapons and upgrades to install on your ship. The weapons range from fairly useful to almost unusable, like the weapon that fires a charge about five inches from your ship. There are a few interesting add-ons for your ship to buy, like a device that hacks into enemy machines to turn them against your foes, or a weapon set selector that lets you change your current weapon loadout in the middle of a stage. You can also purchase new ships, the more expensive ones being able to be upgraded further, as well as having more weapon slots both in the front and rear. You can also use a device bought in the shop to hack open locked boxes of cargo you find in the stages, and while some of them just have junk you can sell for cash, some offer hints to where secrets can be found.

The kind of weapon loadout you bring into a stage makes a big difference between success and failure, and it may take a few attempts until you figure out what works for the current stage. Thankfully, anything bought in the shop can be sold off at any time for full price, so you’re never punished for experimenting. The fact that you have unlimited lives helps, since if you die, you’re just kicked back to the shop where you can tweak your weapon set a little bit more.

The only real similarity Jets’n’Guns shares with your standard console shooter is the viewpoint, and trying to play it anything like your typical shooter will only lead to a horrible, flaming demise. Enemies swarm the screen by the dozens, spraying so many bullets and missiles that you couldn’t possibly have any chance of avoiding all of them. Thankfully, however, you don’t actually have to. The first major difference between Jets’n’Guns and most other console/arcade shooters is that you have a life bar, and you ARE going to need it.

Aside from your hull integrity bar, you also have an overheat gauge, which fills up as you fire and quickly empties when you stop. The exact speed it fills up depends on the weapon you’re using, but it empties so quickly that it’s never an issue unless you absolutely can’t stop shooting. You can also buy bombs to drop on enemies below you, and while you get an unlimited number of these, they do have to reload after you drop a few of them.

The enemies are tougher than your typical shooter, and some of them require streams of constant fire to take them down. This is all while you’re dealing with other enemies flying past you, the dozens of bullets homing directly in on you, all while trying to not end up smacking into the walls. It can’t really be described as a bullet hell, either, since your ship’s hitbox takes up the entirety of the sprite, making a good majority of projectiles not worth the effort to dodge. Bullets alone don’t take up too much health, but direct collisions with enemies are likely to kill you almost immediately, especially when they come up from behind you. Not every death you’ll suffer will feel entirely fair, as some are downright cruel, but to the game’s credit, the longer missions have checkpoints halfway through. While there are a few bosses, they’re all pretty pathetic, and basically just serve as little more than bullet sponges who send streams of projectiles at you. 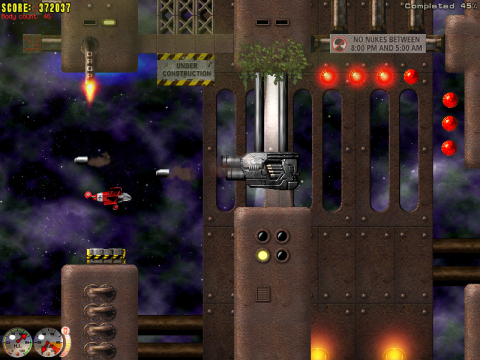 The actual levels themselves are pretty static, and none of them have the complex moving parts and environmental hazards you’d see in a game like Gradius. The only real environmental danger you have to worry about is the walls, which, since you’ll likely have your hands busy trying not to die from all the enemies trying to blow you up, is a small blessing. Still, the game does try to mix things up a bit as you go along, such as having a level where your pilot uses a jetpack to explore an abandoned ship, or a level about protecting a giant beer keg from enemy fire. No, it doesn’t really make sense in context.

What the game lacks in polish, however, it easily makes up for in presentation. While the game’s computer-rendered look may look downright ugly to some people, much of the scenery is destructible, and watching a helicopter spiraling down into a pile of explosive barrels is always deeply satisfying. Pretty much everything blows up spectacularly in this game, including yourself. Many levels also have a few enemy soldiers running around taking shots at you, and a single shot will cause them to fly into the air in a stream of blood. You can drop a ship on top of them for bonus cash, and Jets’n’Guns is possibly the only shooter ever made that keeps taps on the total body count.

The game has a pretty goofy sense of humor, too, since hardly anybody could take anything that happens in it seriously. You can buy a World War I fighter plane that somehow functions perfectly well in space, and at one point you dock at a ship called the USS Impotence, which looks suspiciously like a…well, yeah. The entire game has a complete lack of coherence or sense to it, like a highschooler’s notebook doodles made into a video game. Which is a nice change of pace from how dead seriously most shooters, not counting things like Parodius, tend to take themselves.

The soundtrack is provided by a Swedish band called Machinae Supremacy, who specialize in mixing metal with chiptunes, and their soundtrack is definitely one of the crowning highlights of the game. Most of the music uses a heavy mix of electric guitars and the Commodore 64’s SID chip, which goes great with the massive amounts of destruction on screen at all times. There’s even a level about blowing your way through one of the band’s concerts while they play one of their original songs, “Hero”. By the way, if you haven’t heard their cover of the Bionic Commando theme, you really should.

As a whole, Jets’n’Guns isn’t one of the best shooters out there. It’s unpolished in places, the difficulty, even on the easiest skill levels, can be brutal, and the level design can’t match up to a typical Japanese shooter. On the other hand, it’s a great game for turning your brain off for and just enjoying for all its weirdness, and in this day and age, that’s getting harder to find.

In 2006, RakeInGrass released an enhanced version of the game entitled Jets’n’Guns Gold. It increases the resolution to run in 800×600 rather than 640×480, and includes other additions, like enhanced cutscenes, extra music, more (and goofier) unlockable ships, and a handful of new weapons.