Capcom’s Bionic Commando is one of the company’s best series. It began as a side-scrolling platformer, much like many others, with one important difference – the player cannot jump, requiring the usage of an extended bionic arm in order to travel. It necessitates almost entirely rewiring one’s brain in order to successfully play the game, but that’s also the reason why it’s totally brilliant. 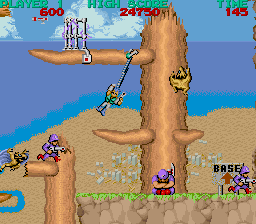 Bionic Commando first hit the arcade gaming scene in the late ’80s, placing you in the role of Super Joe (at least, according to the American flyer – he’s nameless in the Japanese version), the hero from the original Commando, as well as another Capcom game, The Speed Rumbler. The game was directed by Tokuro Fujiwara, designer of many Capcom games, as well as working on the similarly-themed Roc’n Rope for Konami several years earlier.

The titular Bionic Commando is named as such because of his bionic arm, your main method of getting around. It’s rather easy to use. Step 1: Fire it out to a nearby ledge. Step 2: Pull yourself towards the ledge when the arm retracts. Step 3: Hoist your keister up onto the ledge! Or, alternatively, swing on the ledge from left to right like Tarzan on a mechanical vine and drop yourself off below. Plus, if you’re so inclined, you can thrust the arm towards oncoming enemies to stun them. Usually, though, you don’t do this, as Joe also brought along his own rifle. Don’t let the ridiculous, blue spiky hair fool you, he truly is a capable one-man army. Super Joe has to take on lots of enemies, including but not limited to, soldiers by the dozen, thick commandos who rush gung-ho at you, very irritating flying bats, and guns everywhere throughout the enemy stronghold. 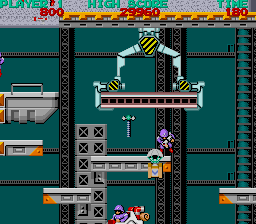 Bionic Commando takes you through five levels of an enemy-controlled stronghold set sometime in the not-too-distant future. It looks like it could easily take place anywhere in the late 80s to the early 21st century. The graphics are nothing to write home about, but certainly adequate for the time, like many of Capcom’s games before they broke ground with Forgotten Worlds and the CPS1 hardware. The character sprites look a bit goofy, probably because they seem to have big heads, which gives them something of an SD-type look. The backgrounds are pretty colorful, and in level 3, you’ll have to deal with giant red mechs in the background that can crush you rather easily. The music, by Harumi Fujita, is pretty dang good, even if the first level theme sounds a bit too jovial for the infiltration of the enemy base. The background music for stages 2 and 4 would also be used in the NES title, to be released two years later.

Navigating with the bionic arm provides a spin on a regular formula that works without being too gimmicky, though it’s not without its faults. The arm has a long reach, but it can’t be fired at the same time as the gun, which seems like a minor inconvenience at first. However, the more you play the game, the more the little kinks in the control irk you. Only two shots can be fired at a time, the arm takes a slight while to retract if misfired, and you can’t shoot the arm while in midair. 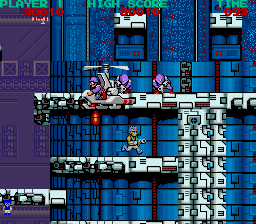 Annoyingly, Joe is killed with a single hit. It just feels that with the unfair assault of enemies, coupled with the muddy control response, this game really could have benefited from at least a lifebar. There are a few power-up guns that can help Joe out, but they turn out to be fairly useless in the long run when a robot crushes him from above. All the rest of the “power-ups” are just point items that do nothing to benefit you in the long run. Granted, the game isn’t very long, but expect to continue frequently.

It’s not that Bionic Commando is a bad game. The Bionic Arm concept was fresh in the day where generic action games came by the barrelful, and it’s still mildly fun to play the game today. It could, however, have been a much better game, with some repairs to the control and more regulated difficulty. Thankfully, that happened with the NES port, which, like Ninja Gaiden and Strider, is an entirely different game. It that takes its mechanics, refines them, and puts the game in a context that makes more sense for home play, which resulted in one of the best titles on the system. 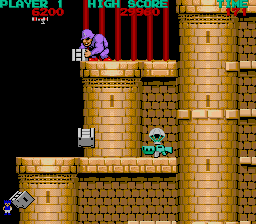 The Japanese version is known as Top Secret. All of the enemies look different than the English release, with larger eyes and other small changes. It’s also buggier and less refined, allowing you to swing through walls, whereas you bounce off them in Bionic Commando.

Until the Capcom Classics Collection for the PlayStation 2 and Xbox in 2005, the arcade version of Bionic Commando never made an appearance on any home consoles. However, it did make it to home computer platforms. Pacific Dataworks International developed ports for the Commodore 64 and IBM PC for the American market. These are both quite poor, with slow speed, and the IBM PC version uses flip screens rather than proper scrolling. However, Super Joe wears a pair of shades. 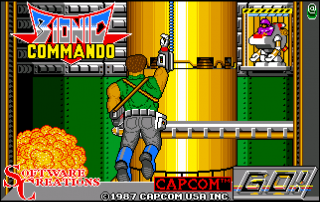 The European ports were developed by Software Designs, and are, in general, much better. This includes a completely different Commodore 64 version, which is probably the best port. It runs at a good speed, while all of the others have awkward push scrolling that requires you to get too close to the edges. The versions with sound include arrangements of the soundtrack by famed musician Tim Follin. Interestingly enough, he manages to combine the level 2 song with the melody from the Star Wars theme. The brighter palette of the Amiga version almost looks a little bit better than the arcade original, in fact. The Amstrad CPC and ZX Spectrum ports are similar, with a window that takes up almost half the screen. 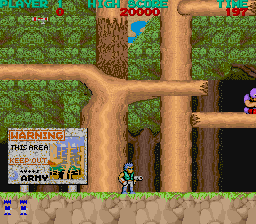 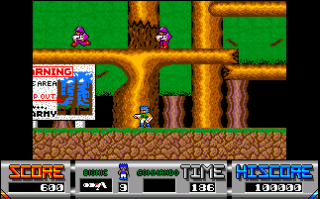 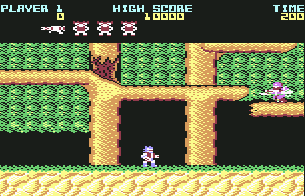 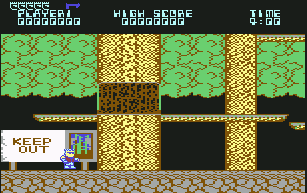 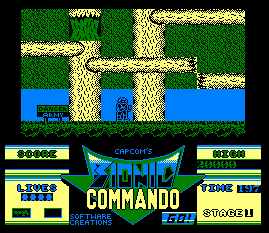