The cinematic platformer genre was always somewhat niche given how its unusual tile-based movement, intentionally difficult to control jumping, instant deaths and focus on puzzle solving resulted in an experience much different from the usual arcade-style platforming. Games like Another World and Flashback had a slower pace and required less quick reflexes or pixel-perfect jumps and more patience, memorization and occasional trial and error. 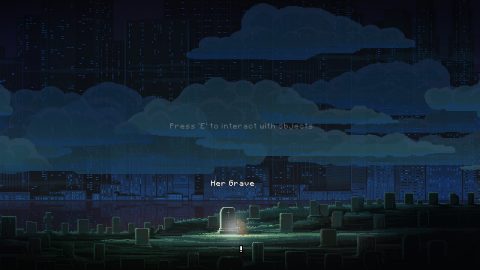 Nowadays, the greatest games from that genre are regarded as cult classics and their influence on gaming is a common knowledge but new games similar to them are rarely being made. To alleviate that problem, a small team of developers launched a successful Kickstarter campaign for The Way – an oldschool pixel art platformer very open about taking inspiration from games by Eric Chahi.

The Way plays like a mixture between a traditional cinematic platformer and a point and click adventure game. Many of the puzzles (and some of the best ones in the game) bear closer resemblance to something you could find in an inventoryless graphic adventure like Myst or The Neverhood – a combination pioneered by a lesser known Amiga game onEscapee. Unlike most games in the genre, The Way also features a mouse-controlled crosshair for accurate aiming – a mechanic more popular in fast-paced PC run-n-gun games like Abuse that works surprisingly well in a completely different genre. 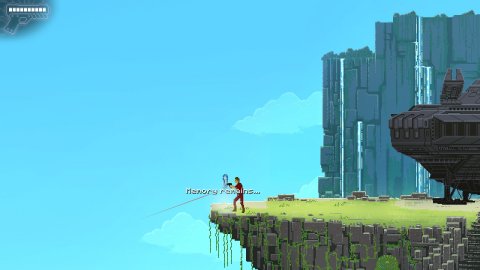 The puzzles in The Way can be brilliant. Certain enemy in the late-game will teleport after taking a hit, moving not necessarily to where you’re currently standing but to where you’ll probably end up if you keep moving at the same pace and in the same direction, forcing you to outsmart him with an unpredictable movement. The game never holds your hand so like in any good adventure game, taking notes might be necessary. Unfortunately, many of the puzzles are fun at first but quickly overstay their welcome because the game insists on repeating them many times in the same area – this is noticeable in the temples where you get some special powers (the ability to move certain items with telekinesis, teleportation and a shield that reflects projectiles and light) but the most annoying example has to be slightly earlier: shooting down a small animal from a tree so that a carnivorous plant eats it instead of you is a cool puzzle at first but if you have to do it a dozen times, always waiting until the animal aligns itself just right, it stops being fun.

Occasionally, The Way can feel less like a cinematic platformer and more like an annoying action sequence in a point and click adventure. A particularly unforgiveable example has the player riding through the desert, trying to escape a pursuing beast and avoid the obstacles. The problem? The desert sand is yellow, the rocks which you have to avoid are a slightly different shade of yellow and the screen keeps scrolling fairly fast. Because this is a cinematic platformer and you die in one hit, it means that your punishment for getting an eye strain while staring into the screen looking for that one rock you missed the last time (or rather that rock formation in which you have to squeeze yourself between the two obstacles) is more eye strain. Surprisingly, a shmup-like bullet hell sequence at the game’s end is quite decent, despite its low difficulty (in contrast to both the traditions of bullet hell genre and the challenging nature of The Way).

Other gameplay problems stem from the interface and controls. Occasionally, you’ll have a puzzle that pauses the game and makes you manipulate some sort of machine. This often involves highlighting and object and performing an action (e.g. rotating segments in a classic pipe puzzle) – something that is intuitively done with a mouse but here has to be done with a keyboard or a pad. More annoyingly, the game doesn’t tell you that by disabling a mouse – you can move a crosshair and perform an action by clicking LMB but hovering over objects doesn’t highlight them, meaning that you’ll have to figure out why you’re manipulating only the first object despite seemingly clicking on another one. Other issue has to do with walking and running – occasionally, you need to do one or another for the extended periods of time (walking for precise movement and jumps, running for escaping the enemies and long jumps) which, depending on the settings, will put your fingers in a very uncomfortable position (left hand holding shift and one of the WASD buttons while occasionally switching to spacebar, right hand on the mouse). This could be alleviated with a simple ‘toggle run’ button but it just isn’t there, you have to switch auto-run on and off in the settings. 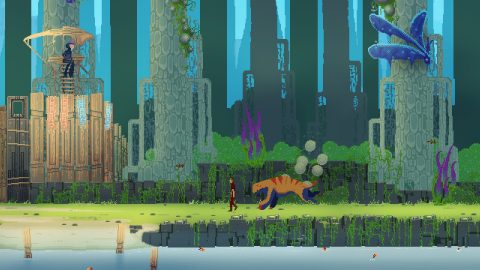 For the reasons above, The Way is not really a great game: it’s just too uneven for that. Fortunately, it’s still a one worth playing because despite the fact that the gameplay is not as good as in Another World, both the story and presentation are impressive – and this is despite the fact that the plot seems to be a collection of different sci-fi, gaming and general narrative cliches.

In The Way, the player is an astronaut referred to as ‘major Tom’ (the game is full of references like that) obsessed with the idea of resurrecting his dead wife. To do that, he steals a spaceship from his employer and travels to the planet where according to legends a Temple of Eternal Life is located. As was mentioned above, the story is built from many familiar elements: the Earth is a high-tech dystopia, the planet is inhabited by a primitve culture which worships its lost predecessors as gods, the player is confronted by a bounty hunter who chases him through space, exploration of the buildings left behind by the creators of Temple of Eternal Life is not unlike something you could see in an Indiana Jones-style adventure movie mixed with LucasArts’ The Dig, at a certain point you gain a helpful alien sidekick (although he’s more of a giant dog-like animal than an intelligent humanoid from Another World and the whole thing is a story about love stronger than death and the price of immortality. Still, the game makes all this very engaging partially due to good (if minimal) writing and partially due to how well it shows the main character’s obsession through the passage of time – he might be a young man when the game begins but he’ll spend decades learning the alien languages, doing research, travelling through the desert and digging a very long tunnel. This is reflected through the protagonist’s sprite which near the end of the game shows an old man with gray hear and gray beard. 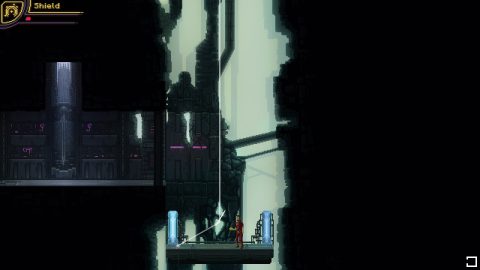 In addition to a great story, The Way looks and sounds amazing. The visuals combine the look and feel of classic point and click adventure games with more modern pixel and its pseudo-3D geometric shapes, monoliths, monumental desolate architecture and considerably less detailed character sprites. While the latter style might a bit overdone now among indie titles given the popularity of Fez and Superbrothers, the combination manages to create an atmosphere similar to that of Another World’s mixture of vector graphics and rotoscoping, despite looking very different. The atmosphere is amplified by the eery, mysterious ambient soundtrack – the perfect music for exploring the abandoned ruins of an alien civilization in search for the secret of eternal life.

The Way is a beautiful tribute to the classics of the cinematic platform genre. It’s also an amazing audiovisual narrative, although it’s somewhat lacking as a video game. 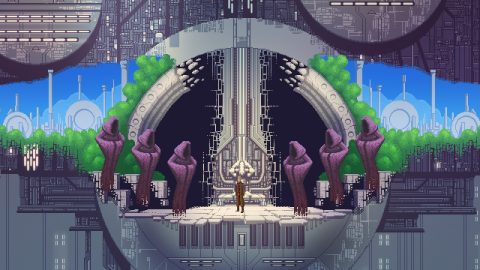 Possibly, it would work better if it was shorter and some of the repetitive sections were removed – it’s not a long game (it takes about 12 hours to beat it) but unlike Another World, it’s not something you could beat in one sitting. Maybe it would work better as a point and click adventure game – many of the puzzles would work in that format without major changes, the story and visuals could be exactly the same and many of the lacking action segments wouldn’t be there. As it is, it’s worth playing for die-hard Another World fans and everyone else who can put up with the gameplay shortcomings to enjoy the occasional moments of brilliance in the puzzles and the awesome narrative but the less patient gamer will probably have more fun watching The Way than playing it.