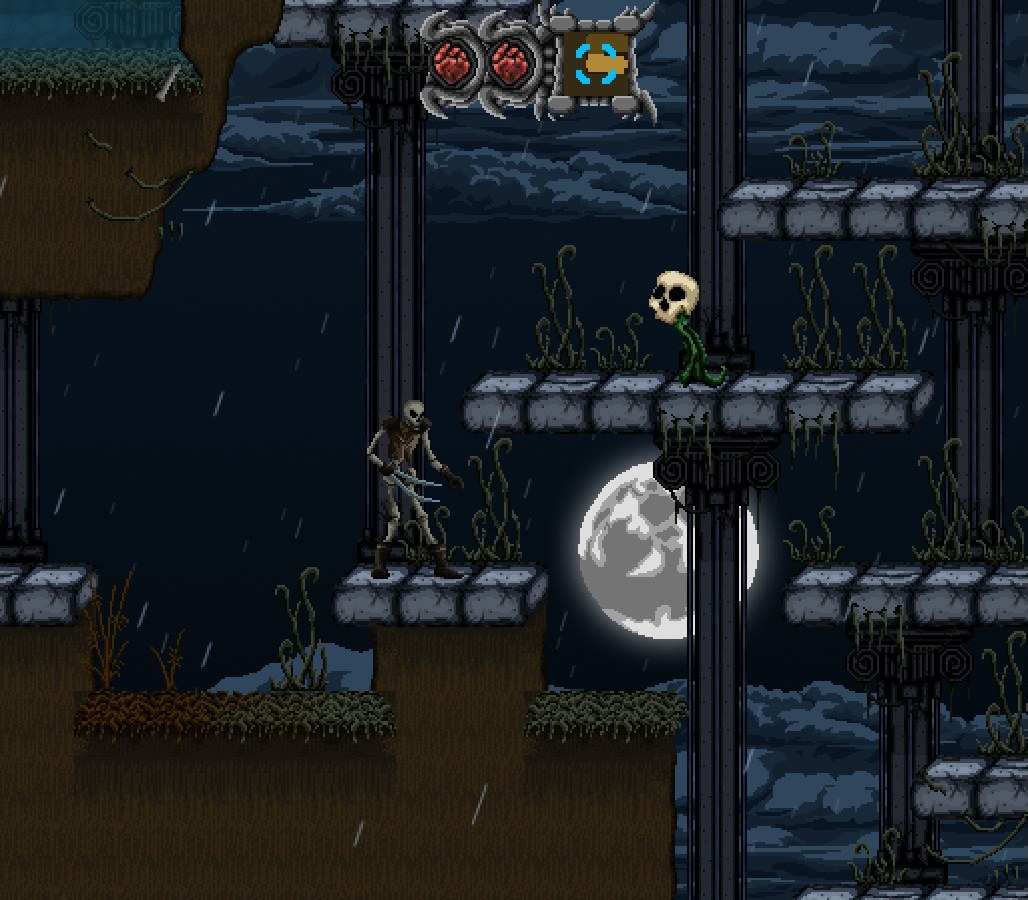 After Death is a 16-bit inspired Metroidvania platformer created by the “After Death Team” and released on Steam in 2017. In the game, you control a nameless skeleton who is lost and trapped inside a giant, dark and surreal world that resembles a castle. Your objective is to overcome many obstacles and find new powers to recover your memory and escape from this place.

The game was developed by Nolan Duluiyog (artist and designer) and Vincent Deraët (coder), two long-time French friends who have been trying to make games in their free time since the beginning of the 2000s. After Death was their first complete work and it was heavily inspired on their favorite childhood games like Super Castlevania IV and Super Metroid. The development of the game began in 2011 and it lasted for years, mostly because Nolan lived in Lyon while Vincent was living in Paris, so they could only meet during some weekends and most of the work was done remotely. 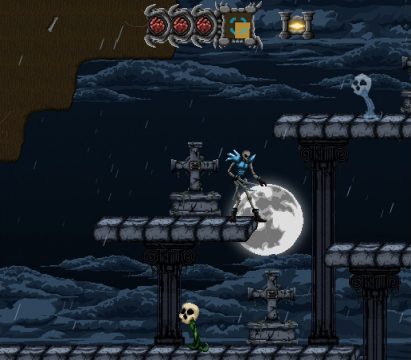 After Death starts when your character wakes up alone in a castle and starts to explore his surroundings. Soon, he finds spirits who tell him that the world he was in was created by a mysterious and all-powerful being called the Sculptor. Some of them seem loyal to the Sculptor, while other spirits clearly want to help the nameless skeleton. Your journey in the game is to explore the castle and defeat all the guardians to open the portal to the outside world.

The story is really interesting and, as the game progresses, you start to notice that something is wrong and that things might be what they seemed. It is heavily hinted that some characters know more than they are telling and that you might be being deceived. The nameless skeleton also sees flashes of other places and it looks like he has a very close link to his nemesis, the mysterious Sculptor. The secrets and twists of the story, while somewhat predictable if you have consumed plenty of fiction, add a very interesting layer of density to the story.

The environments are superbly made and resemble old SNES games. The game was hand-drawn by Nolan himself and each area has a very distinct feeling. During the game, you will explore a castle that will really remind you of the Castlevania games sometimes, but also caverns, icy plains, deserts and even an underwater level that takes you to the bottom of the sea.The design of the bosses is also noteworthy. They look very menacing and death is a theme that is present in many of them as you will mostly face giant skeletons and monsters made of human parts like eyes, etc. The bosses are very detailed and one of them is even inspired by a real human skull. 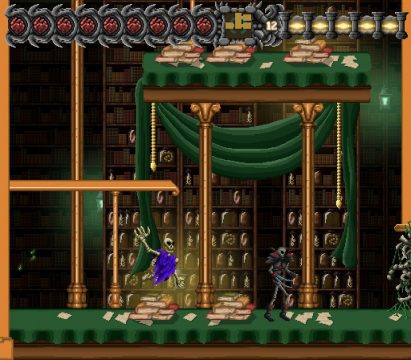 The style of the game was heavily inspired by Super Castlevania IV and other 16-bit games. After Death is not a real 16-bit game, though, as the developers thought that they could not create environments detailed enough if they did not use a more detailed resolution. It is also interesting to note that the game uses a 4:3 screen format instead of the current 16:9 widescreen model.

The music of the game was composed by Francisco Cerda, which also composed the soundtrack of Jamestown and Gunpoint. The songs of the game are very moody and help to evoke a nostalgic feeling of the old Castlevania games sometimes. There are 15 songs in the game, one for each area and some for special occasions like bosses and dialogues. Two of the highlights in the soundtrack are Hopes from the Abyss and Cemetery.

Gameplay is heavily inspired by Super Castlevania IV and Rondo of Blood. While your character does not have the reach of a Belmont because he attacks with his claws, not whips, the way that he moves and the physics are very similar to these games. You really have to be careful while playing, especially early in the game, or you might end up dying easily because you can only be hit 4 times until you get the first life power-up. 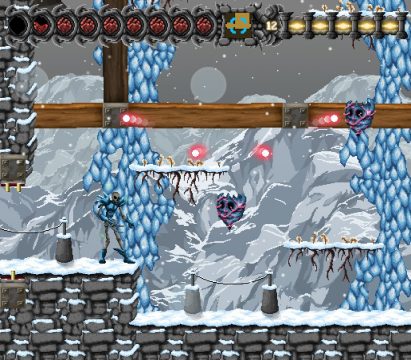 The combat is interesting because it is never just about smashing the attack button. Even the first enemy that appears in the game, a small skull-ish monster, cannot be hit if your character is not crouching. Some enemies can only be hit if you freeze them first and many others are fast, throw projectiles that are hard to dodge, etc. You should not expect the level of difficulty of old Castlevania games, though. The game is easier than even Super Castlevania IV, often criticized for being too easy. It is certainly harder than most Metroidvanias, though.

You have to gather power-ups to make your character stronger, but there are no items or leveling in the game. In this sense, the gameplay is more akin to Super Metroid than later Metroidvanias like Symphony of the Night. Fortunately, that means that no grinding is necessary to complete the game, which you will probably be able to do within 8-12 hours of playtime.

The game is considerably harder in the beginning. It is easy to die at first because you do not have much life and that might get in your way, but when you explore the castle and collect the power-ups, the game will be quite easier until the last battle. If you try to beat the game and make the best ending, though, you will have to face a tough battle. 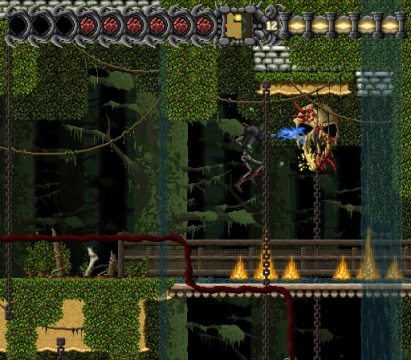 Exploration is done in the usual Metroidvania style and it is pretty good. Generally, the game is more about defeating the enemies and reaching your objectives than it is about finding secret passages (at least in the beginning, but more on that later). There is a main hub and many of the areas can be accessed from there, but they also interconnect with each other. With time, you will find power-ups and be able to explore more areas and move on. In the beginning, exploration is somewhat linear and you will be told where to go, but the game starts to get increasingly more open as the time progresses and by the middle of your journey, you will be free to explore the map and find the guardians for yourself. In most of the cases, you will actually have to look for hidden areas that you could not reach before to find the rooms where the bosses are.

The game map is quite big for an Indie game and there is plenty to explore if you want to find useful power-ups like life and weapon upgrades. The individual areas are big and could have been more connected to each other, but, fortunately, there is a helpful teleport system to aid you to backtrack through the game world much faster.

After Death has some interesting abilities that can help you both in combat and exploration. The two most prominent ones are the fire and ice armor. They enable the nameless skeleton to use magic attacks on enemies and also serve for exploration. With the ice armor you can freeze water and walk over it and the fire armor will make you able to unfreeze it and explore areas that were locked before. Other abilities are the always present double jump and the Metroid-inspired ability to turn into a spider to access small spaces.

When you reach the ending of the game, you receive an ability that will help you to find secret passages if you haven’t done that yet. I have to admit that the secret passages in the game are so well hidden that it is actually pretty hard to find them without gaining this ability first, but you will probably feel motivated to backtrack and find them because they will enable you to reach the best ending of the game. 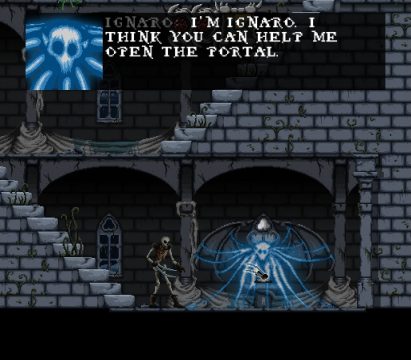 The game was mostly bug-free even when it was launched. The team worked hard to iron all the bugs before the release, so you can expect After Death to play very smoothly and without issues. The only issue that was found was that there is a square in the desert map that cannot be reached, but you will get 100% completion of the game anyway even if you don’t enter in that space.

After Death is a very solid game that offers much more than nostalgia. The game manages to be more than a homage to old-school games with the use of a great art style, music and an increasingly interesting story. The game offers a good challenge that will not bore hardcore players but will also not crush the spirit of the beginners (too much). The main problem of the game is that it could have handled the use of secret passages better, as most players will only really find them at the end of the game to make the best ending.

Article about the creation of the game