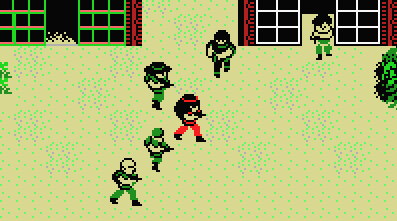 Compile was a prolific developer through most of the 80s and early 90s, known for their many excellent shoot-em-ups (Zanac, MUSHA, Blazing Lazers) and then eventually their Puyo Puyo puzzle series. One of their lesser known titles, published in 1987 for the MSX by Hudson, is Jagur 5.

Going by the package logo, the title probably should be spelled “Jaguar”, but each of the letters in the title also corresponds to the five heroes: Jef, Ann, Goardic, Ukon and Roger. These commandos have been summoned to a Southeast Asian country to wipe out a drug cartel. The game actually begins with you just controlling Jef, exploring a town, gunning down enemies, and raising money, with the goal being to find your compatriots, who are randomly scattered about. Once you’ve gotten your crew together, you take a jeep off the jungle, where you then hunt down each of the cartel’s main members to dispose of them. Killing enemies yields money (as well as ammunition), which can be used to buy new weapons, curatives, food, and bulletproof vests.

You actually control your entire squadron at once, with one of them designated the leader and the others marching in a formation of your choosing. Once you reach a boss fight, it changes to a side-view perspective for a one-on-one fight. Curiously, while the characters are basically identical when running around the jungle, each member has their own unique weapons in this part, with Ann’s flamethrower and Goardic’s bazooka being particularly useful.

The game doesn’t take itself all that seriously, seeing how some of the major enemies are evil monks, and one boss is a little old lady in a drug lab. There’s even a scenario where you take a village girl out for a shopping trip. All of this stands counter to the macho action movie stereotypes that obviously inspired the game. It’s also got a great concept and setting for an RPG, one that wasn’t really revisited until Sir-Tech’s much later (and also much different) Jagged Alliance series.