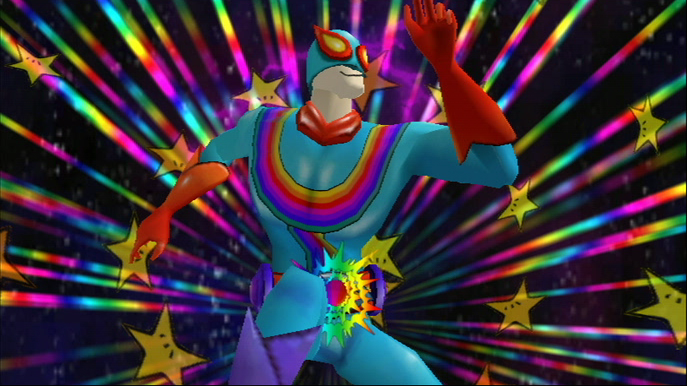 This entry was written for the Japanese Video Game Obscurities book, which is currently being crowdfunded on Kickstarter. 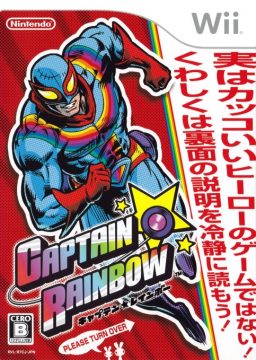 What happens to the characters of video games and manga when they’re forgotten? That’s the premise of Captain Rainbow, an adventure game for the Wii, which is sort of an inverse of Super Smash Bros, at least thematically. You control a man named Nick, himself possessing a tokusatsu superhero alter ego who ends up getting tossed aside in favor of newer, more popular heroes. He learns of a place called Mimin Island, where wishes are said to come true. He takes a boat out to the mysterious land, only to find it inhabited by characters from obscure old Nintendo games. It’s up to him to solve their various crises and help them win their own lost dreams. The game plays similarly to Skip’s previous Nintendo games, including Chibi-Robo and (particularly) the also-unreleased-in-English Giftpia, right down to the gibberish language. Like the developer’s previous games, it puts on a funny veneer, but gets surprisingly serious as the game goes on. In addition to all of the running around, there are also various minigames and action segments scattered within. Mimin Island, rendered in cel-shaded visuals, looks gorgeous, but the designs of some of the other characters is a little odd.

On that note, the central issue with the game is how the developers supplied personalities and dialogue to characters which never had them before and the result is…unusual. One of the first characters you meet is Hikari from the Famicom Disk System adventure game Shin Onigashima…but she looks nothing like she originally did. Other lost characters include Takamaru from Nazo no Murasamejou, Lip from Panel de Pon (which was turned into Tetris Attack in America) the soldiers from Famicom Wars, the guy from the cover of Golf for the Famicom, and the Devil from Devil World. There’s also Little Mac from Punch-Out!!, who has gained a ton of weight since his original boxing outings, and Crazy Tracy from Link’s Awakening, who wishes to enslave all of the men in the world and litters her mansion with pictures of Link and Mario.

There’s also Birdo (Catherine in Japan) from Super Mario Bros. 2, who is long debated if they are transgender woman or a transvestite. Birdo, who refers to themself as “Sexy Dynamite Monster”, has been arrested for using the wrong bathroom, and talks with an alarming amount of (bleeped out) curses. To prove that they’re a woman, you need to visit their house and find something that proves their womanhood, which is displayed only as a question mark, with the only real description is that it vibrates. Much of the humor derives from the contrast between Nintendo’s cutesy image and its comparative filthiness, but it’s surprising that Nintendo even approved it

The game was a flop in Japan, and the content, as well as the fact that many of the games featured were unreleased in English, meant the game was never localized. Still, Little Mac’s workout song, “Asatte no Jou” (“Tomorrow’s Passion”), was featured in Super Smash Bros Wii U.