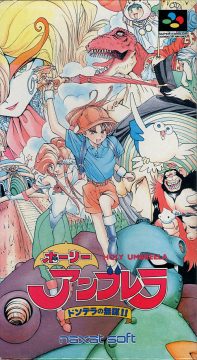 The Super Famicom was most well known for Mario-style platformers and Final Fantasy-style RPGs, so it made sense to combine the two genres with Holy Umbrella: Dondera no Mubou! (“The Reckless Dondera!”) The map screen is reminiscent of Super Mario World, with many of the locales presenting a side-scrolling stage. In these areas, coins don’t grant extra lives but rather can be used to purchase curatives and other items, while other items can be found to extend your health meter or upgrade your offense or defense stats. The map also has town stages, viewed from an overworld perspective, where you can talk to the townsfolk and progress the story. 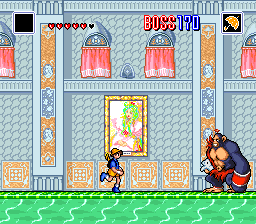 And the story is where Holy Umbrella really shines, because the game is gloriously weird. The nameable protagonist is a regular boy sucked into this strange world, wielding the umbrella of the title, which can be changed with different elemental properties. There are also other characters you can switch between at any time once they join you, including the acrobatic woman Saki, the tiny bird Bonto, and the evil (but not quite) Emperor Dondera, ostensibly the game’s antagonist but who briefly joins your team after they all accidentally get swallowed by a whale. There’s also a whole ton of silly dialogue, particularly a scene from the recurring enemy, Dondera Tank, who makes an entrance singing karaoke, then explains he felt he needed to put on a show lest the player get bored (and then his boss comes out and admonishes him for breaking the fourth wall). The characters were designed by artist Tatsuya Egawa, mostly known for his adult comedy manga Golden Boy, and while this is much more kid appropriate, its silly sense of humor shines through. 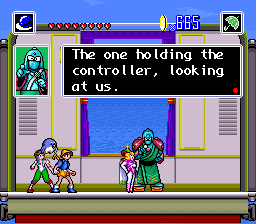 Purely as a platformer, it’s a little stiff, owing to the slow default movement speed of the characters. Plus it’s also pretty easy, considering there are no lives and you just restart an area or boss fight when you die. But while it’s only a few hours long, it’s a gloriously amusing little trip.

Link to the fan translation