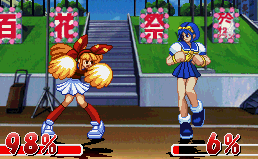 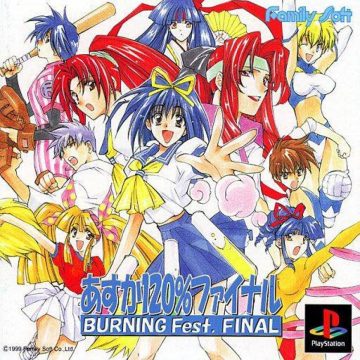 The fighting game boom started by Street Fighter II in 1991 produced almost untold amounts of similar games, many struggling to stand out. Fill-In Cafe’s Asuka 120% Burning Fest series’ distinguishes itself by featuring a roster almost entirely made of high school girls. The heroine, Asuka, is a star chemistry student, but the rest of the roster includes a rhythmic gymnast, a cheerleader, tennis, volleyball and softball players, and even a representative from the school newspaper. Beyond their club representations, each have brightly colored, wild hair styles, very much a mark of mid-90s anime. The character designs were provided by Aoi Nanase, an artist later known for manga/anime Seraphim Call.

While it may have seen like a cynical ploy to capture the audience of the burgeoning bishoujo game market, it’s also an incredibly well made game, with many innovative elements that were re-used in later fighting games. It’s very fast paced and combo heavy, with double jumps, the ability to cancel out attacks by executing another move, and other techniques featured in later fighting games, particularly the Guilty Gear games. It’s also fairly approachable, with simple controls and universal command inputs across all of the characters. The “120%” of the title refers to the maximum level of the super meter, which, as is standard, allows the fighters to execute super attacks.

The combat system of Asuka 120% was based on the mecha beat-em-up Mad Stalker, an earlier game by Fill-in Cafe for the X68000. Designed and programmed by Masatoshi Imaizumi and Masaki Ukyo, this style was the source of a number of other similar games developed between the duo, including Fill-in Cafe’s own Panzer Bandit, Treasure’s Yuu Yuu Hakusho: Makyou Toitsusen and Guardian Heroes, Studio Saizensen’s Code of Princess, and 5pb’s Phantom Breaker: Battle-Grounds. It’s also similar to Makeruna! Makendou 2, another cutesy 2D fighting game, whose PlayStation port was developed by Imaizumi. (The original Makeruna! Makendou, a 2D side-scroller, was released for the SNES in America under the name Kendo Rage.)

The series actually began in 1994 on Japanese home computers – the FM Towns and X68000, in particular – before moving onto various consoles, including the PC Engine, Saturn, and PlayStation. There are numerous revisions over the series’ life, officially ending up with Final Burning Fest and Return Burning Fest, for the PlayStation and Windows, respectively. These were both released in 1999 by publisher Success, shortly after Fill-In Cafe had gone out of business. There was even an official “hack” released by the developers for the Saturn version, technically the most recent version of the game, though there’s no way to play it outside of emulation or with a modded console.