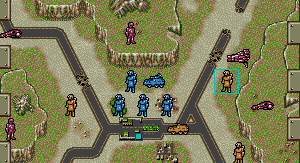 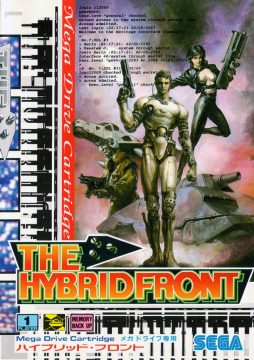 Daisenryaku (“The Great Strategy”), first published in 1985 for the PC98 computer by System Soft, is essentially the grandfather of all Japanese strategy simulations. While a few games in the series were released in North America (Iron Storm for the Saturn, Daisenryaku VII for the Xbox), most English speaking gamers will probably be more familiar with some of the games that inspired it, including Nintendo’s Famicom Wars (and its sequels, the Advance Wars games), and Hudson’s Military Madness/Nectaris. Sega developed and published their own versions for the Mega Drive called Super Daisenryaku and Advanced Daisenryaku, but to round out their war sim trilogy, they dropped the license and ended up creating their own spiritual successor. 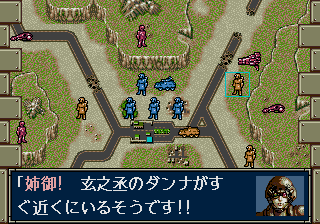 The Daisenryaku games are based off of real life military equipment, and in some cases patterned after actual World War II campaigns. The Hybrid Front hits fast forward on that and sets the game in the 26th century, where the Earth has been devastated due to dwindling resources and global warming, and humanity has allowed itself to be conquered by a corporate hegemony. The war takes place on a few different locations, including Earth, the moon, and Mars.

The Hybrid Front is pretty typical of others of its type – control soldiers, bikes, tanks and aircraft in turn-based battles, while you witness the skirmishes from a split-screen sideview, though there’s no unit production or anything of the sort as seen in Advance Wars. The main draw is the story written by author Masahiro Noda, who had been one of the stars of the Japanese science fiction scene since the ’60s. In addition to the interstitial narratives between levels, there’s also a history and character database, and it’s pretty detailed for a Mega Drive game. The cover and manual artwork is by Jun Suemi, who was famous for his covers for the Japanese Wizardry games, among other types of sci-fi and fantasy artwork. It’s also got a fantastic soundtrack thanks to a trio of talented Sega composers, including Naofumi Hataya, previously known for his works on Sonic CD, and then on later Sonic Team games. It’s a funky, dance-like score with a generous use of digitized samples, quite unlike the soundtrack to any other strategy game, and provides an exciting backdrop to the tactical combat.