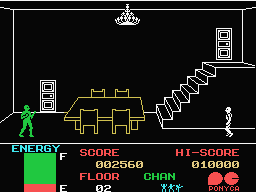 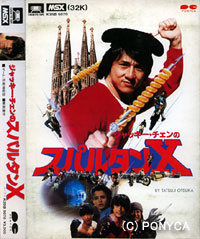 A proper adaption of the movie Spartan X appeared soon after Irem’s arcade brawler, once again a MSX title by Pony Canyon. The movie takes place in Barcelona, as Thomas (Jackie) and David (Yuen Biao) are working as fast food vendors on the streets of Spain. They operate from a futuristic yellow van which can transform into a small road shop, and enjoy their simple lives. This gets turned upside down however when their mutual friend Moby (Sammo Hung) is searching for a woman named Sylvia, who ends up in their house. What they don’t know is that Sylvia’s family is after her to steal her secret heritage.

Again, it’s debatable how much of this Pony Canyon actually got translated into a video game. With the same engine as Project A, you still use the different directions to do different moves, though now the arsenal is more beefed up, and the game displays how to do the different moves on the title screen. They also did add a new section to the gameplay. 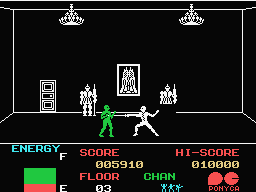 The beginning of the game has Jackie turned into a Ninja Turtle running towards the castle Sylvia is being held at. As you run the 10KM in less than 2 minutes, you meet ongoing motorbikes trying to run you down. This is taken from the beginning of the movie where Jackie and Biao fight of a bike gang making trouble on the streets of Barcelona, but boy did they stretch it here. The scenery consists of green grass and trees, and why Jackie is running while in the movie there is plenty of scenes of them racing their van, raises some questions about the design choices in this game. The fighting parts are a bit more responsive this time, and the background is more interesting, but not by a lot. While Project A only had a straight white line and some ridges, this game features more details inside the castle, and you fight the enemies one at the time. The enemies you fight are based on the baddies from the movie, Benny Urquidez, Keith Vitali and the sword wielding Jose Sancho.

It ain’t video game magic just yet, but it’s an improvement over Project A in pretty much every way. It also features some pretty bland in-game music during the fights, but it’s hardly memorable.