Sunsoft’s third Batman game unfortunately is the worse than its predecessors. This Sega Genesis title looks nice in screenshots, and has an underrated soundtrack almost as good as Batman: The Video Game, though it lacks the NES title’s focus. This installment also follows the movie the more accurately than the last two games. It looks great on the surface, but is unfortunately a chore to actually play.

The game’s level design is where it falls apart. The wall jumping and guns from the NES and GB game are completely gone. Instead, Batman can punch, kick enemies while crouching, and throw batarangs (which are more limited in supply than on the NES). He also has a jumping attack, a very awkward looking downwards tumble with questionable hit detection. It’s extremely useful if you can master the timing of it but isn’t really required to pass the game. Another under developed technique is that Batman can block some attacks by holding down the punch button, but it’s so slow and limited that it’s easier to beat the game without ever using it. Finally, Batman can use that iconic “wonderful toy” from the movie, the grappling hook. This was the coolest addition to the game, and any magazine showing it off made sure to have at least one screenshot of Batman ascending to a higher platform or otherwise showing the grappling hook in action. 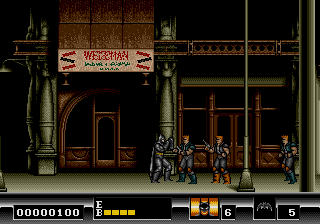 This sounds like the basis for a good game, but the hook can only be fired straight up. So with its limited range and the loss of the wall jump, almost every level is a straight line with the occasional columns to ascend or descend. It’s not the worst platformer on the Genesis, but is a massive letdown compared to the impressively huge-feeling levels of the NES version. The action itself is fairly weak as well, with more frequently reappearing enemies and bosses that require almost no technique to overcome. There is some variety, though. Keeping in line with the plot of the movie, there’s a side scrolling shooter level where you get to drive the batmobile, and another piloting the batwing.

The decadent overkill of these shooter stages cannot be overstated. They’re fast, absurd departures from the game proper. You get to speed along in the Batmobile, gaining ground on cars. Then suddenly tanks and armored vehicles appear, freely exchanging missile fire on an urban highway. The Batwing level is similar. These stages are simple, but have a nice sense of speed, and feel great to blast through after slowly trudging through the game’s standard levels. While basic, these levels are fun enough that Sunsoft may have been more successful building a more complex shooting game around these levels and dismissing the weak platforming and fighting action entirely. 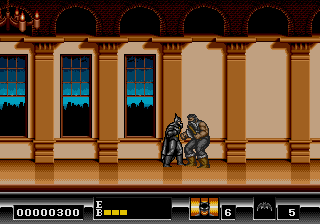 Astérix and the Power of Gods
Night mode