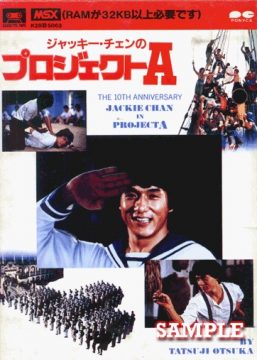 Pony Canyon made their first real efforts of porting Chan’s amazing action into a video game with Project A, based on the 1983 movie with the same name. In the movie, Chan plays Dragon Ma, a marine police officer in Hong Kong. The seas of Hong Kong have been infested with pirates, and Ma leads his squad to stop the swashbucklers once and for all. However, because of the tension between the Police and Marines, fights between them breaks out and Ma is forced to go on his own to stop them, and eventually gets the support from his comrades and bitter police counterparts.

While the movie was groundbreaking at its time for the incredible stuntwork, martial arts action and production values unheard of in a Hong Kong movie, the game is sadly not as breathtaking. You control Ma as he infiltrates the cave of the pirate king San-Po, which is taken from the final act of the movie faithfully enough. The game plays a bit like Karateka, as you walk along left to right, fighting pirates and flying bats. On the screen, the Kaizoku (Pirate) counter displays how many are left on that stage.

The biggest problem is the incredibly stiff controls. Like Karateka and IK+, you push directions to do different moves. You have the standard punch, kick, and a Double Dragon II-style back-kick for when you fight multiple pirates from both sides. Here lies another problem – the pink boat boarders gang up on you constantly, and your timing must be spot on to hit them. The bats fly at different altitudes and come at you at the same time, leading you to be swarmed by them as well. When you face the pirates, the sprites start flickering and you have no control over where they are or how many you are fighting at once, and you’ll find yourself dying without knowing exactly what happened. Once you have knocked down the pirates, you have to duck down and stab them for them to die. This finishing touch is taken from the movie where Yuen Biao ambushes the pirates and stabs them to death.

It certainly isn’t much to look at either, which is to be expected by MSX1 standards. There are only 2 short jingles, one for the start of each level, and one for each time you die, both highly simplistic and lasting 4-5 seconds each. The graphics are incredibly simple, and other than the title screen, there’s not much here telling you that you are indeed controlling Chan himself. There’s not much fun to be had with the severe flaws to both the controls and gameplay. Being the first Jackie Chan game, it sure ain’t pretty.