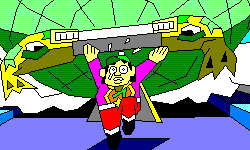 “Warning: For Crazy People Only” proclaims a sticker on the cover of Dezeni World, a more insane take on the whole theme park treasure hunt theme established by Hudson two years before. This time the player is put in the role of an onscreen character – Dezeni Man, a fat disheveled loser who bears some kind of resemblance to Hudson spokesperson Toshiyuki Takahashi (also known as Meijin Takahashi, who was also the main character of their Adventure Island series, although he denies the connection.) His goal – to infiltrate Dezeni World and disable the evil computer HAL3 (a parody of the HAL 9000 from 2001: A Space Odyssey, although in Japanese it’s pronounced “harumi”, a girl’s name.) 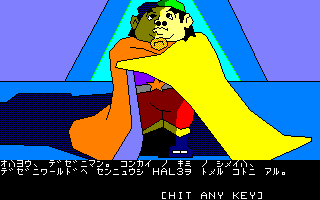 Dezeni World isn’t broken up into attractions like Dezeni Land was, but they took the parody angled and cranked up it up several notches. One of the first characters you meet is a bartender who looks suspiciously like Golgo 13 (a ripoff one of his famous sniper rifles can be found right behind him.) When stumbling into the phone booths, you stumble upon a blond haired Superman (with a katakana “su” on his uniform instead of a “S”). Later you stumble some dude putting on an Ultraman costume in the bathroom, get a taxi ride with Batman, and disable a guard who wears a mask exactly like C-3PO.

Disabling the HAL3 works just like it did in 2001, as you remove pieces of its memory while it slowly goes crazy, but before you can completely escape from its clutches, it transfers its consciousness to Butamaru, an alcoholic talking pig, who then turns into the Stay Puft Marshmallow Man. 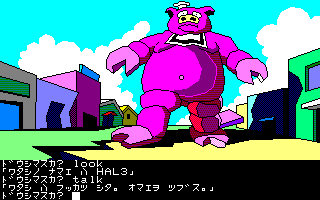 The flagrant disregard of copyright is quite admirable – they even begin ripping off Hudson’s own properties with the appearance of a washed up Prince Lettuce and a statue of Sir Cucumber, both from Princess Tomato and the Salad Kingdom. Other goofy bits include a knockoff of Spaceship Earth (the big golf ball thing in Epcot) called Starship Nagoya, which Dezeniman ends up destroying, and a reset button that, when pressed, will make it seem like you’ve reset your whole computer. (Don’t worry, you haven’t.)

The interface has improved over its predecessor, offering substantially quicker loading times. The color palette is still limited, but the quality of the artwork has improved substantially, to the point where most of the humor is communicated through the visuals, thereby making it enjoyable even to non-Japanese speakers. 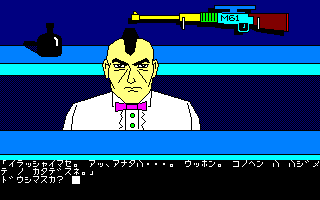 There’s also a bit of music, playing a few bars from the famous melodies associated with the characters you meet (the theme from the Richard Donner Superman movies, the 60s Batman TV show song, and so forth.) The game was also packaged with an audio tape with several songs, all painfully 80s, including themes for Dezeni World, Butamaru, HAL3, and, of course, Dezeniman himself. The interface is the same, although the vocabulary isn’t as rough, and it’s quite a bit easier in general, with less “run around and find the object that fits in this slot”-type puzzles. With a slightly more driving plot, however silly, it also elevates itself above the mere “treasure hunt” quests that comprised so many text adventures of the era. 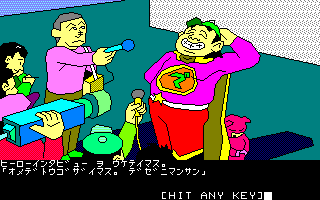 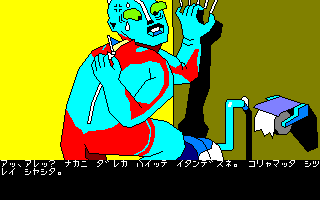 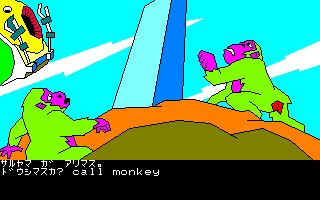 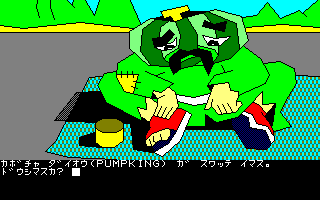 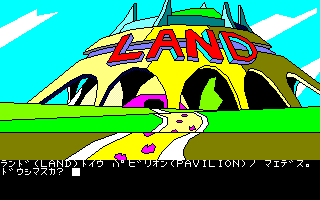 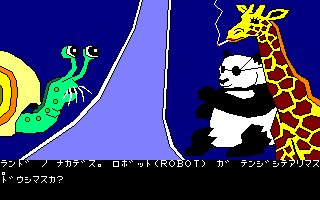 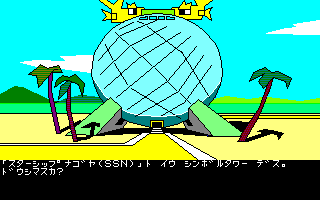 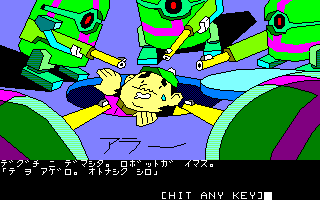 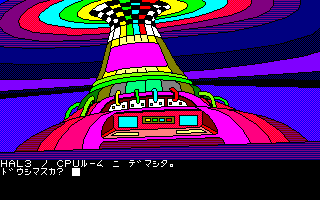 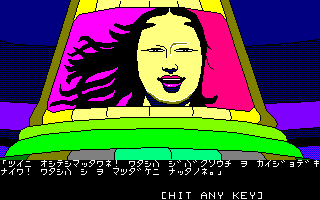 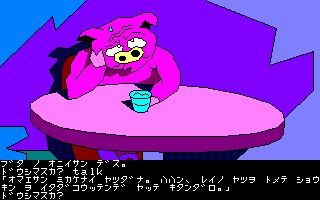