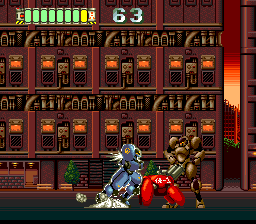 Mad Stalker is Fill-In Cafe’s first attempt at a beat-em-up. Designed and programmed by Masatoshi Imaizumi and Masaki Ukyo, its systems are loosely similar to the Asuka 120% Burning Fest series, whose first entry was released later in 1994. There are three main versions: the X68000 and FM Towns games, developed by Fill-In Cafe themselves (the X68000 version has the subtitle Full Metal Forth, which was corrected to Full Metal Force in the FM Towns and later entries); the PC Engine CD port developed by Kogado; and the PlayStation version, again by Fill-In Cafe, which is more of a complete remake than a port.

The story takes place in Artemis City in the year 2142, in the wake of a massive war. A ship containing hundreds of mecha, called SlaveGears, is discovered and confiscated by the government. Two of them are put to experimental use by the police, but one, Rising Dog, is commandeered by a rogue officer. The other, Hound Dog, is sent to stop his rampage. 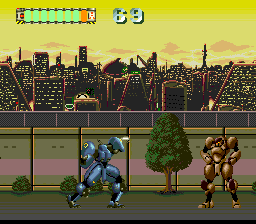 Mad Stalker is a bit different from the typical belt-scrolling beat-em-ups released in the early/mid-90s. The action is kept to a single plane, akin to older games like Irem’s Kung Fu Master, while the gameplay is closer to a 2D fighting game. Despite controlling gigantic mechs, the characters are fairly agile, with various dashes and double jumps. Your moveset is also relatively large considering there are only two attack buttons, with jumping uppercuts and laser projectiles. You can even become dizzied after successive hits. Unlike beat-em-ups like Final Fight, which create combos automatically by hitting the attack button, Mad Stalker expects you to vary up your moves by beginning with weak attacks, moving into strong ones, and then using more powerful techniques that can hit them in the air. Again, this is closer to a typical 2D fighting game. In fact, if you try to play it like a regular beat-em-up and just keep hitting the attack button, the game ends up feeling very stiff. It’s fairly freeform in the way that other attacks flow into each other, though.

Even so, there’s a certain clumsiness to the action. This is mostly due to the enemies varying in size and maneuverability. There are tons of foes that are half the size of your mecha, meaning you need to squat down to reach them. Others fly in the sky, requiring you to leap up to smack them down. The enemy AI, especially for bosses, is also fairly aggressive, even on the lower difficulty levels. Plus, they can block effortlessly while you need to press both buttons at the same time, which is awkward to pull off in a pinch.

The game also lacks some of the features one would expect from a beat-em-up. The main arcade mode is only single-player, and you can control just one mecha, the Hound Dog. At least the bosses are playable in the two-player versus mode, which is a recurring feature in all of the subsequent games spun off by Mad Stalker. 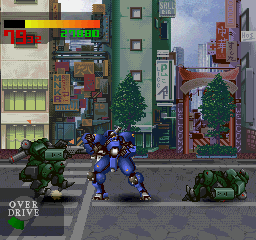 There’s little difference between the computer versions of the game, other than the X68000 version using a MIDI soundtrack and the FM Towns release featuring CD audio. Kogado made some changes to the PC Engine CD version, including adding fully voiced cutscenes after all of the stages. They’re pretty low budget, considering they merely consist of characters talking about an upcoming mission without much action, but they’re still a nice touch. To accommodate the expanded story, there are actual characters now who pilot each of the mechas. Two other mechas, the Kamui and the Gong, are also available in single-player mode as well, with the rest still present in the versus mode. This version also features a CD-audio soundtrack. All that aside, the gameplay remains more or less the same. The graphics receive a noticeable downgrade here though, with all of the parallax scrolling having been removed.

The PlayStation version was released in 1997, and adapts the system so it’s closer to Panzer Bandit, also released by Fill-In Cafe in the same year. With the revamped controls, the action is much, much smoother. Like Panzer Bandit, there’s an auto guard when the controls are left in neutral, and you can also deflect enemy attacks by hitting them at the same time. Dashing and boost jumping have been assigned their own separate buttons, too. A few other things have been added as well, like an “overdrive” power gauge that can be discharged for more powerful maneuvers. Enemies also regularly drop health restoratives, whereas the previous versions only provided them at certain points in the stages. 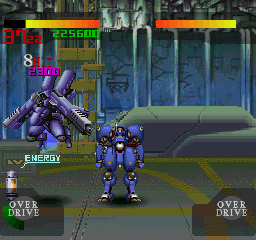 The sprites here are all the same, but the backgrounds are now 3D (though still single-plane), and look entirely different. Despite the visual makeover, however, the stages and bosses are all still pretty similar. The music has been rearranged, though, with some tracks taken from a Mad Stalker soundtrack album released alongside the X68k game in 1994.

In spite of the enhancements, this version still feels pretty thin. By default, you can still only use the Hound Dog in single-player mode. There are several more you can unlock with a code – six total, twice even the PC Engine version – but it’s weird that they’re hidden. Co-op also remains conspicuously absent. It’s completely missing the extra story and cutscenes from the PC Engine CD, too. Overall this is superior to all of the other prior releases, but it can’t exactly be called definitive. 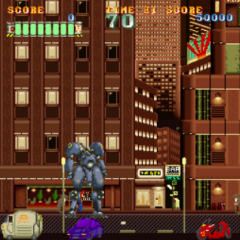 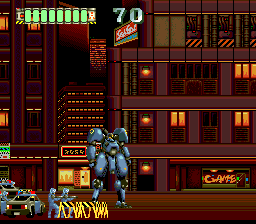 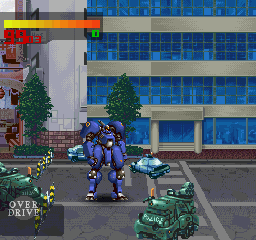