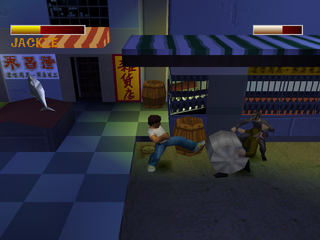 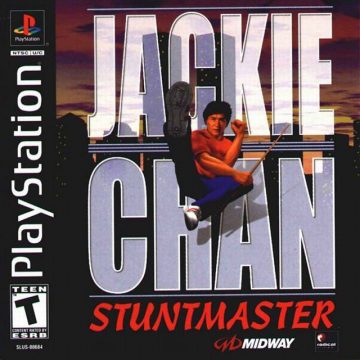 After a five year absence from the video game market, Jackie once again returned to do motion capturing on a new title based on him. In 1999 Radical Entertainment started work on their new title Jackie Chan Stuntmaster which set out to be the most authentic Jackie Chan experience so far in a video game. Radical didn’t have many well known titles under their belt at this time, and their catalog consisted of many ports like Mario Is Missing on the NES and some lesser known sports titles. They brought Chan in to provide all motion capturing for his in-game character and also to record the dialogue.

At this point in the PlayStation’s lifetime and much like today, graphics dictated if a game was worthy of your time or not based on magazine scores and mainstream word to mouth. In late 1999 games like Final Fantasy VIII and Ridge Racer Type 4 had blown gamers away with amazingly realistic graphics and visual effects. When you pop in this game for the first time, you’ll be greeted by a sight that will either make you laugh or make you cry depending on where you stand on the graphical fence. Rick Stringfellow was brought in to do the art direction, and the approach was an extremely simplistic cartoon style which is somewhat a blend of the Final Fantasy VII in-game models where characters have no hands and Crash Bandicoot‘s over the top animation. The gameplay itself also bears a resemblance to Crash Bandicoot.

You play as Jackie Chan, a Chinese immigrant working in New York as a package delivery boy for your grandfather Frederick. One day as Jackie is stacking boxes to be driven out of the warehouse, Frederick comes over with a special high priority package. He instructs you that the box must be delivered right away to the address shown, The Temple Of The Shaolin which according to the package is located in Vancouver (which is the same location where Jackie shot Rumble in the Bronx). As Frederick warns Jackie that he’ll be in trouble if he goes to stuff himself at the restaurant instead of delivering as usual, Jackie reassures him that he is already on his way. We then fade into a shot of Jackie stuffing himself at the restaurant instead of doing the delivery. While Jackie is enjoying his meal, Frederick has been kidnapped by the evil Dante who is after the package and Jackie catches them driving off. After a short chase and few stunts, he finds himself in a back alley and the game starts.

The alley acts as your central hub, connecting the sections together. There are a total of 5 sections which all have 3 stages each. As you begin the game you start off at Chinatown and eventually move onto the Waterfront, Sewers, Rooftops and Factory sections. Chinatown will take you through the streets and shops of Chinatown, Waterfront will guide you through the docks and ships at the port, Sewers will have you Ninja Turtle your way underground, Rooftops makes you jump roof to roof in the New York skies and finally Factory leads you to Dante himself for the final showdown.

At the end of each 3rd stage you fight a boss from Dante’s misfit posse. These bosses are pretty stereotypical in character and for the most part you’ll go through them quite easily. The boss cast is featured with bios in the manual:

The game plays like a mix of Final Fight and Crash Bandicoot, with plenty of brawling thugs to beat and platforming sections where you pull off death-defying leaps and acrobatics. Jackie has a rather large arsenal of moves, which comes in handy in all the fights you encounter. The square button triggers a flurry of punches, the triangle button gives you some kicking action, circle grabs your opponent and the L1 button counters enemy attacks. At the press of an attack button, you start pulling off combos as you continue tapping, and you can experiment combining button presses in order to prolong the combo. This is really the key as to why the brawler part of this game works so well: because of the ease of pulling off long, satisfactory combos that effectively keep your opponents back. They are also timing-based, so attacks will change depending on when you mix the button presses which makes the brawling a bit deeper than just merely mashing buttons. Enemies come at you mostly 3 at a time and aren’t overly aggressive, which gives you time to roll around the environment and plan out your attacks. In addition to combos, you can also hold down either of the buttons to do a charge move, the backflip kick which allows you to juggle the enemy or the drunken fist, which will temporarily stun your opponent.

The environments play a big roll in the fights, too. Like in most Jackie Chan movies, a lot of the scenery can be used as a weapon. You’ll find tables you can flip, brooms that can be used as staffs, paint brushes to redecorate your enemies and even salmon to slap in thugs’ faces. These come in really handy, as they increase your reach and dish out double damage. It’s not limited to weapons, though: You can also bounce off walls and perform backflips to gain the advantage over your enemy. The boss fights are mostly one-on-one in an open field, but they can easily be beaten by just counter attacking since they all move relatively slow.

While the brawling works quite well, it’s a different story when it comes to the platforming. Like Crash Bandicoot or Donald Duck: Goin’ Quackers, the camera is always positioned infront of you. When you run right to left, this isn’t the biggest of problems but in many cases you are required to jump inwards or outwards from the screen. This creates some very fustrating moments where it’s damn near impossible to calculate the proper distance of the jumps and missing them often leads to instant death. You’ll encounter this problem the most in the Waterfront and Sewer sections, where you are required to jump on floating platforms in the water, and most times, you’ll find yourself overshooting your jump. Jackie’s jump is also not the most responsive feature in this game, which can be equally as confusing. As you press X to jump, there’s a split second delay and the height is preset depending on the length of your press. That means when you are in dangerous situations where you find yourself jumping from falling platform to platform you’ll most likely be pushing buttons fast, and suddenly Jackie will do an extremely short jump which completely misses the target and sends you to instant death. This problem was very common in 3D platformers in this era.

Despite of all the platforming issues, the game makes up for it in its presentation. The guys at Radical Entertainment were clearly huge fans of Chan, which shows through the many cutscenes and nods to his movies, mannerisms and even music. Jackie did extensive voice work on this game and you can hear him joke around at almost any given moment. When you are on top of the game and beating people left and right, he will be cocky and proclaim “no one can beat me!” but when you get beaten down you’ll hear things like “somebody call an ambulance!” This combined with the fact that Jackie’s English isn’t exactly perfect makes for some genuinely funny moments. The other voice actors must have been watching tons of kung fu movies before going into their recording sessions too, as they all overact and do very broad French, Indian and Texan accents which are completely out of place. You’ll find yourself performing classic stunts like the bus jumping from Police Story 2 and clock tower fall from Project A, and there’s always a little cutscene of big stunts on each level.

Throughout the game you will encounter red dragon heads, which bring up a counter when you pick them up. This makes replay value much higher because you will have to revisit plenty of stages to find all 10, which are scattered around at every level. Find all ten and you get a gold dragon head. If you manage to collect all of them, you’ll get to visit a secret stage, which is the Temple of The Shaolin, where Jackie is supposed to deliver the package. This stage is more of an endurance round where you’ll keep on fighting enemies on a large area rather than exploring the level, and it features an exclusive drinking bottle barrel which gives you constant drunken fist powers. Reaching the Temple of The Shaolin also unlocks a new costume, a collar jacket like he wore in Drunken Master.

The music, which was composed by Graig Robertson, is quite excellent too. A mixture of Gu Zheng, Diza flutes and Erhu creating traditional Chinese melodies backed with a driving electronic drum beat and ambience keeps the music always appropriate for the action on screen. It actually creates a surprisingly dark feeling to a somewhat lighthearted game, which fits since even though Jackie is goofing around he is on a mission to save his kidnapped grandfather.

When you defeat Dante and save your grandfather, you’ll get a short ending sequence which shows Jackie forgetting the package behind as they drive off into the sunset in the delivery van. As the credits roll you’ll get the trademark NG footage like you’ll see at the end of any Jackie Chan movie. (NG stands for No Good, and shows outtakes and bloopers during shooting of a movie.) Best of all they included a making of video at the very end, which shows footage of Jackie doing the motion capture work and they also interview him, talking about his video game playing past. If you look at his different movies, you can actually see Sega featured often since Chan was such a big fan. In Police Story 3 you can see Columns being played and in Rumble in the Bronx his characters gives away a Game Gear. While he doesn’t mention Sega by name, he talks about how he enjoyed games more when there were fewer buttons. During this video you can also see them playing through an earlier version of the game where Jackie’s in-game model is wearing a black shirt and khaki pants instead of the white t-shirt and jeans.

While by no means a perfect game, Jackie Chan Stuntmaster has a lot of good going for it. It’s one of the few 3D brawlers that truly work, and the fights feel very fun and hardly get repetitive. The platforming can definitely suck the air out of you sometimes, but they’re not insurmountable and once you get over the harder parts you’ll breeze through those sections in no time. If you’re a fan of Jackie Chan movies you’ll most likely find yourself enjoying this game, even loving it for its authentic feel. Compared to some titles that came later in the same spirit such as Jet Li’s Rise To Honor or Chow Yun Fat’s Stranglehold, this game prides itself more on not being too serious and just providing fun for all ages.

A funny little trivia note: during the opening cutscene when Jackie is eating, you’ll hear a song played over the speakers. This is a song sung by Jackie called “Dan Yuan Hua Chang Zai” (“I Wished The Flower Could Never Fade”) from his album My First Time released in 1992. 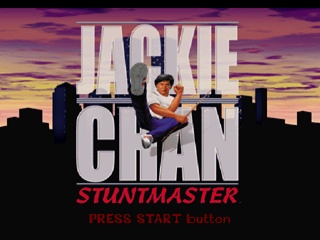 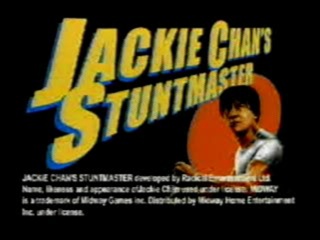 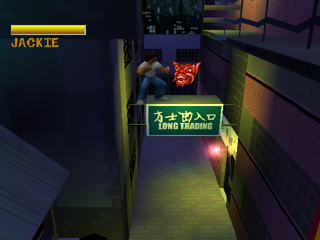 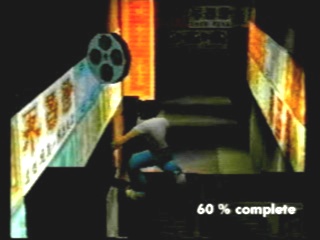 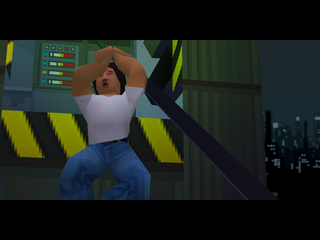 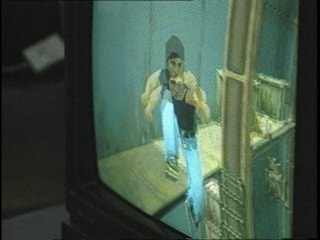 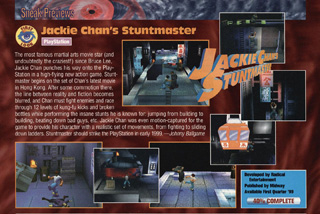 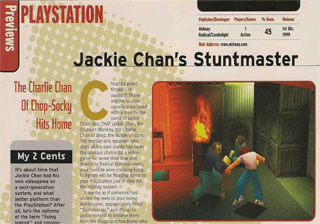