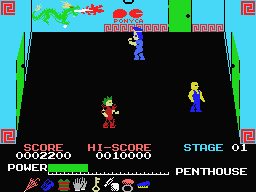 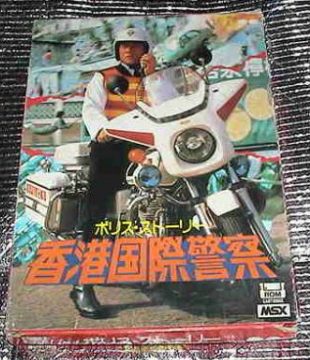 Police Story is another big fan favorite, and in Japan especially, this movie made quite an impact. The movie revolves around Chan Ka-Kui, a police officer determined to bust the crime lord Chu Tao. After successfully doing so, he is shown as a model police officer in the media, and Chu Tao vows revenge on him, going after his family and pride.

The game uses the same sprites and style as The Protector, released a few month prior to this game. In this game you control Jackie going through a large building beating up baddies and snakes. The goal is to walk around, finding items to unlock doors, and finding the boss. As you go on, the buildings get bigger and the game drags on. Most the rooms look largely the same apart from a few color changes and decorations, and the enemies you face are loose snakes, punk thugs and bald musclemen. After a few minutes, the game gets extremely repetitive, and you’ll find yourself pretty confused over the items and the shoddy collision detection. While it uses the same style, The Protector was a much more enjoyable game, as it had a much more simple approach, and this game tries to be more complicated for no other reason than to differ from the other releases.

For a movie with so many legendary key scenes, it’s clear that this game is wasted potential.

Jackie Chan in The Protector