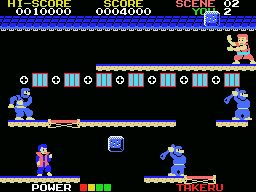 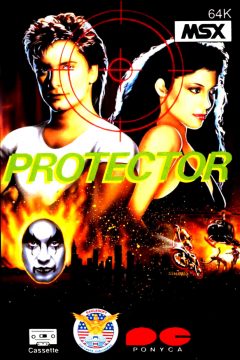 For the US audience, The Protector was probably the most forgettable movie Chan had ever made until the release of Spy Next Door proved us all wrong. Chan plays police officer Billy Wong who works in New York, swears all the time and shoots thugs without any remorse. It may be strange to think they choose this of all movies to make a game out of, but after its disastrous release in the US, Jackie reshot a lot of the scenes for this movie, including the final fight, and released his version in Asia to avoid damage to his image. The movie was quite a success in Asia, and so Pony Canyon decided to make another MSX game out of it.

This title differs from the two previous MSX releases. The graphics have a more defined style, with the sprite actually looking like Jackie. The game itself can be described as a cross between Mario Bros and Yie Ar Kung Fu. You jump onto platforms with the help of trampolines, and fight the different bad guys. Each stage has a different layout, and all the enemies are clearly defined and colorful. The scenery changes at times too, as you fight in warehouses and factories. It is a much more enjoyable game than the Karateka-like fighters before it, and can actually be quite enjoyable. Some years later, a company called Brother Industries released a reskinned version of this game called Legend of Takeru on the MSX.

Again, there’s little memorable music to be heard, and the cover art is quite confusing, as it shows a blonde protagonist, dark haired female and a floating burning head. Yeah.