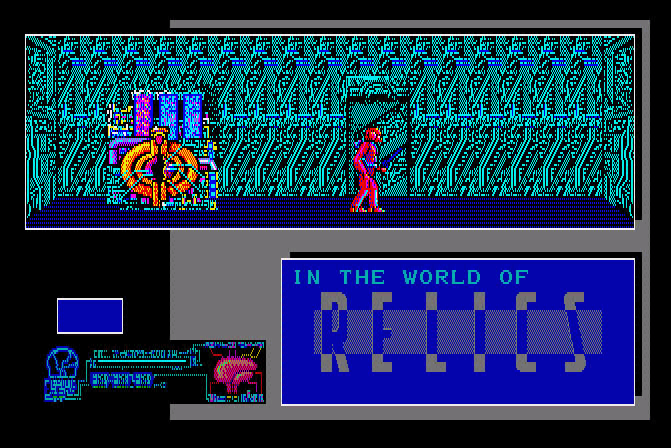 While the first few games of Bothtec, a company primarily known for its Legend of Galactic Heroes games for multiple platforms, were developed as part of a contest and its winners became the company’s members, Relics, a very ambitious game for its time, was the first major project, eventually released in 1986 for PC-98. Relics went through a lot of design concepts during its two years of development, but in the end, we’ve got a very unique action-adventure. 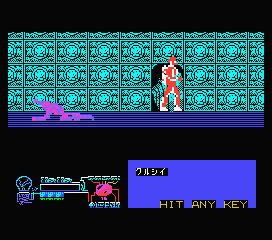 The first thing the player sees after booting the game is a text about two ancient forces opposing each other, stuck in a pointless conflict in which there is no good or evil, no light or darkness, just two forces, which doesn’t provide much information on what is happening. As will be explained later, the part mentioning moral ambiguity of these two forces isn’t exactly correct. Once the text has scrolled all the way up, a cutscene plays, showing a fortress rising from under a sea during a storm, and then giving the player a view of the many ziggurats atop the stone castle, all while a recreation of Crystal King’s song “Woman” plays. A very impressive sight for a game made in 1986.

It should be noted that different ports of Relics all have perks that aren’t present in versions for other platforms. For example, the aforementioned panoramic cutscene is not present in the MSX2 port, which has a static image of the fortress behind the game’s logo instead, and one for older MSX models has significantly simplified graphics, as the detailed visuals of other versions are too much to handle for this kind of machine.

Once the cutscene is interrupted by a key press, the player is once again welcomed by a beautiful sight rich with details: a disembodied shade can be seen in front of a stone wall, with water in the background and a deep hole by the side. The graphic design of the game is clearly inspired by works of H. R. Giger, albeit with some distinction: most of the characters look like some sort of an insectoid monstrosity or are hidden inside futuristic armor, albeit it’s sometimes hard to notice due to the screen resolution common at the time – it’s more noticeable in the manual that comes with the game. However, the moment the player tries to move, a very significant flaw can be observed – the input is quite laggy; the impressive visuals take quite a lot of processing power, even with all the workarounds like repetitive patterns of a wall in the back.

When the player inevitably approaches a creature nearby, be it a very odd-looking rabbit-like beast or a soldier in red armor, the shade takes over the body, giving a greater freedom in roaming around the ruins. Then, another problem arises, this time it’s clunky controls: for example, if you want to turn around you must first press “up” key, and then push one with the direction you want to go, otherwise the possessed body will walk backwards, and if you hold both up and a left or right button, you instead run. Combined with the latency, the unusual controls make the game much harder to play, especially during midgame when there’s a lot of entities that slow the game down. 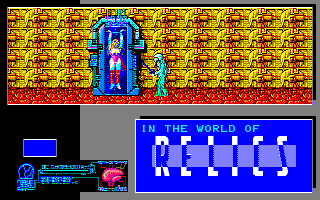 Still, once the player possesses a creature, it can usually take over another one by defeating it in combat – the animals bite their opponents to death, while soldiers usually fence with their blades or shoot their guns at the enemy. This ability is very useful since there is no way to heal the current body if it ever gets hurt, which, considering how collision works in Relics, is very likely. The game, however, tracks most of the player’s activity and this affects how the game continues, so while it is useful to change bodies from time to time, it shouldn’t be done often, and unnecessary fights are to be avoided.

Speaking of which, whatever the player does while in the ruins determines quite a lot, though the biggest influence this has is what ending they get. There are three routes, which is already unusual for adventure games of the time. One of them leads to the true ending that explains the backstory in much more detail than the text in the beginning does, while the others reset or softlock the game after showing a brief message. These primarily depend on the level of violence, cowardice, curiosity and, as the game itself puts it, sense of justice the player demonstrates with their actions, as well as what creature they have taken over. All of these decisions usually appease one of the sides of the game’s hidden conflict: one prefers kindness and the other cruelty. The game provides a lot of clues on what does what in the form of documents hidden across the whole fortress, all of which are written in somewhat broken English. The game encourages experimenting with it in every way it allows, as well as exploration in general,so that the player discovers all the game has to offer. 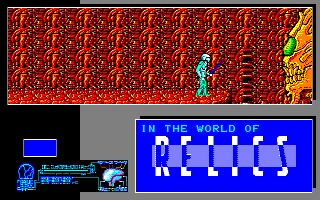 Relics is a very bizarre, yet very charming game full of mysteries that, while not without flaws, proved to be so well done that it warranted a sequel for Famicom and later a reboot with its own continuations for PC, as well as a re-release for modern systems, the latter of which came with a lot of extra material about the games’ development and a red trooper figurine, made in likeness of one of the first characters the player encounters. The game may be a little clunky to play, but nevertheless, it’s an example of an ambitious project that was ahead of its time – it’s still a very interesting experience that is very hard to imitate. 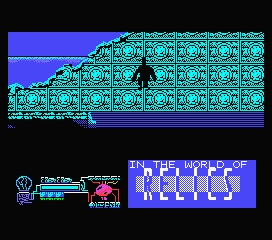 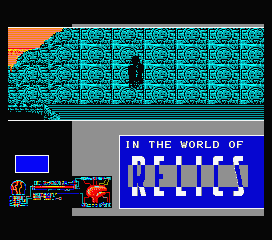 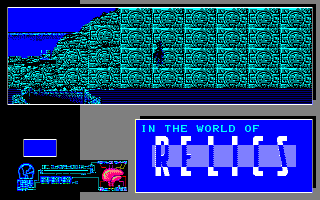