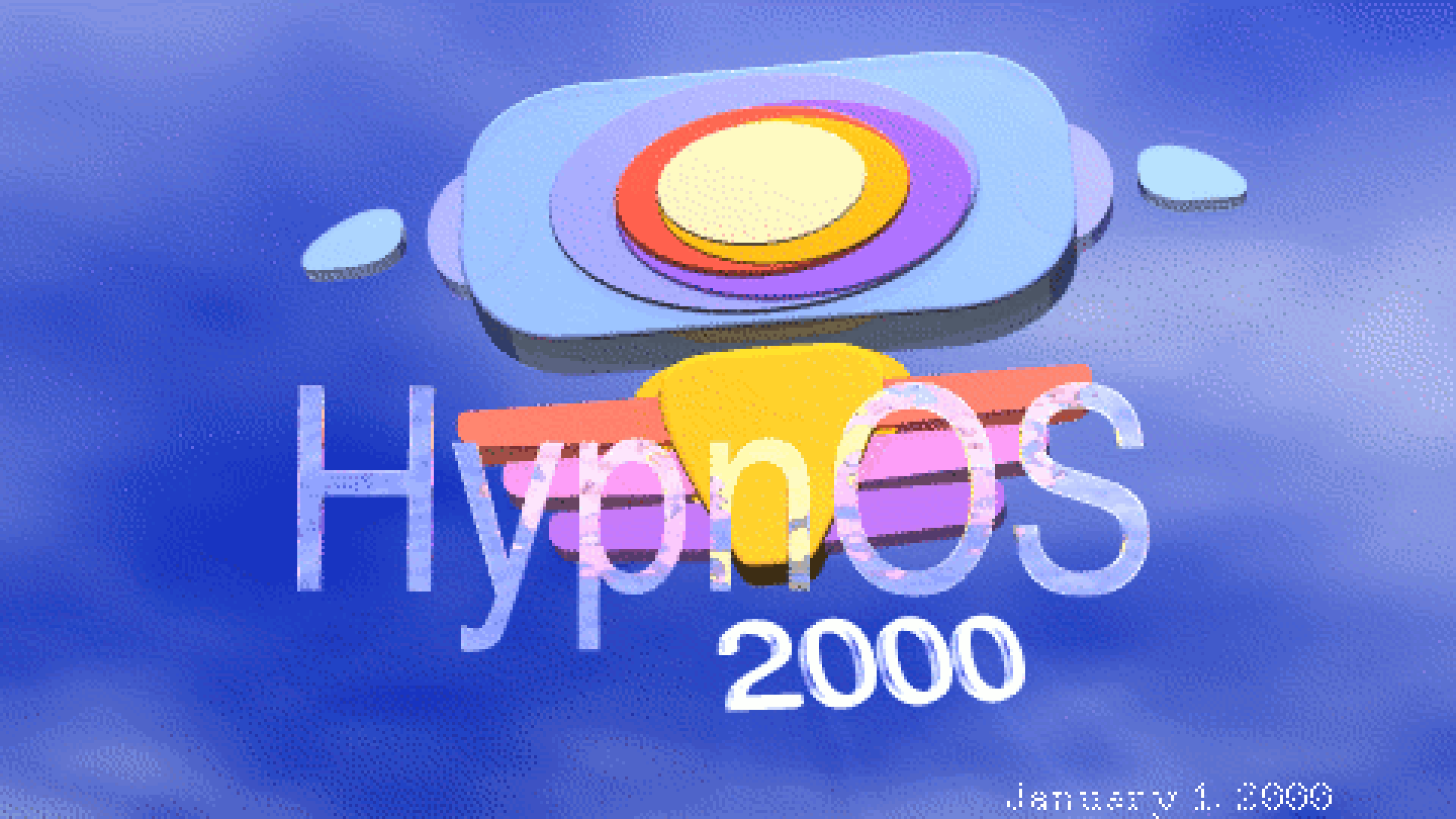 The late 1990s could be seen as the golden days of the modern internet. It was back in the time when the World Wide Web was in its infancy – a shiny, brand new thing to be chartered, largely shaped by the individuals that chose to partake in it, rather than being dominated by major corporations. That is, of course, a romanticized version of the past – this was before conveniences like streaming media, and no one really wants to go back to phone line modems – but it still provides an interesting setting for Hypnospace Outlaw, a detective adventure game from Tendershoot. It creates its own virtual 1990s setting, complete with gaudy backgrounds, dithered visuals,  auto-playing music, and an overwhelming amount of animated GIFs. (No frames, though.)

This isn’t quite the same 1990s, rather an alternate and reimagined one. The entirety of the game’s cyberspace is contained inside of dream virtual reality helmets, experienced while users are asleep, and is a mishmash of eras and technologies. The setup is akin to America Online, where there are different “zones” of various interests, while the user created page designs are a combination of the average Angelfire/Geocities/MySpace site. Each page is given a set of tags, which you can use to search for various topics, plus each are categorized into major themes similar to the webrings of old. There’s also an introduction area where you click around first-person areas similar to adventure games like Myst, which was a common theme in 90s multimedia PCs. 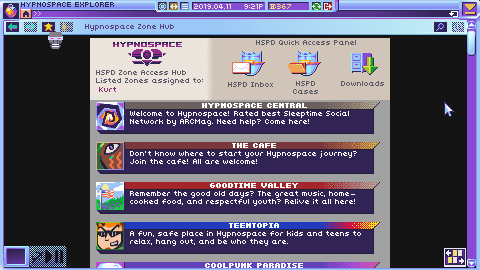 An enormous amount of effort was put into this so that HypnoOS looks and feels like an actual operating system. There’s the web browser, which is where much of your time is spent, and the e-mail program, where you receive your orders from, but there’s also a virtual desktop, a music player where you can customize your own soundtrack, screen savers, wallpaper, virtual pets, viruses, virus cleaners, and assorted applications of varying utility. Some of these are “free” (or can be pirated), some are purchased via in-game currency, some come with irritating pop-up ads. There’s even a BIOS which acts as an advanced options menu.

But your main role is that of an Enforcer – that is, a moderator that searches for and scrubs any content that violates the rules. This includes harassment, copyright infringing material, shocking and offensive content, and so forth. Your initial tasks are the sort of things that are technically illegal but ultimately rather petty, like scrubbing fan art of an old cartoon character drawn by children. But it quickly becomes clear that you might not be the “good” guy here – after removing an unauthorized payment system from a online business, you return and find the author begging that you’re basically ruining their way of living. 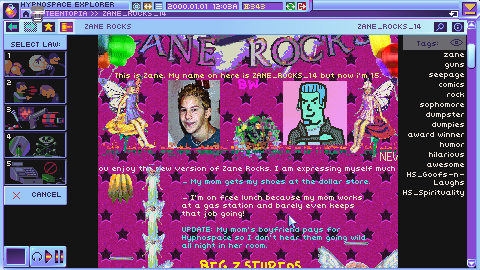 It’s a good while before the “plot” actually kicks in, as the company gets ready for the Year 2000 switchover, but altogether, if you break down all of the steps you need to beat the game, Hypnospace Outlaw is not very long. But actually “beating” it is only part of the experience – the real fun is being immersed in it. Behind each of the pages is an individual, whose identity manifests itself in their creation – their hobbies, politics, religion, taste in music, and so forth, much of it achingly earnest but presented without derision. Some of them know each other in real life too, as you can see the juvenile high school drama in the first area you need to patrol, dubbed “Teentopia”. Many users aren’t happy with how Hypnospace is being run, not only in your role in keeping clean (the schoolteacher whose page you scrub of the aforementioned cartoon character begins a patriotic crusade against your actions), but in various technical and organizational issues. A bunch of users “leave” the main area in favor of an independent section called “Freelands”, which crows about the freedom that anyone can do what they want, but is fact ruled by the arbitrary whims of one of the admins. There’s also a sidequest to hunt down hidden stickers called Squisherz, which are sort of like NeoPets, and even a “secret” file sharing network you can infiltrate.

Audio plays a huge role in the game too. Since this is technically an alternate universe, subcultures developed a little bit differently, with all kinds of music that’s very similar to our own but given different terminology – there’s one page devoted entirely to tracing the history of “Haze” music. There’s a substantial amount of original music that acts not only as a parody – it’s hard not to giggle at the Linkin Park-esque nu-metal in one of the teenager’s pages, or the intentionally awful MIDI-esque sequenced junk – but it’s also a loving homage. The new-age tracks of Zared (“it’s Earthhaze so it’s cheesy as hell”, as one of the denizens describes it) is legitimately excellent stuff, and it’s hard not to love the goofy 80s overly patriotic rock stylings of The “Fkin’ Awesome” Chowder Man. 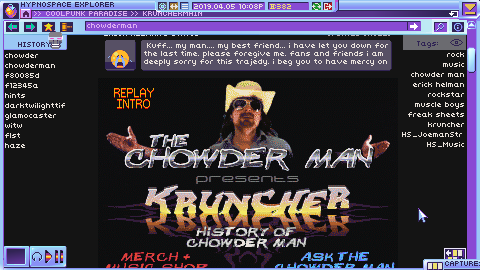 Even though the game is about policing the internet, Hypnospace Outlaw really isn’t interested in discussing similar contemporary real world issues, like whether social media companies should be held responsible for spreading far-right hate speech. It doesn’t come out for or against it, just notes how that system has the potential to be abused. What it does address is broader aspects of responsibility of tech corporations, as it’s pretty clear that the minds behind Hypnospace are reasonably incompetent and way out of their depth, not only at a technical level but on managerial and social levels too. It also examines the need for Internet archives and how this new media is ephemeral, especially resonant considering that, right after the game was released in 2019, Myspace announced it had simply lost over a decade of uploaded music.

There’s a joy in just surfing this alternate, halfway-nostalgic web, but when you actually try to solve the mystery is where Hypnospace Outlaw becomes rather frustrating. The first set of tasks is pretty simple since you can search related tags, or just browse around a fairly small area to find stuff that’s obviously against the rules. But then the world very quickly opens up, and your tasks become much more abstract. Like many adventure games, in order to proceed, you really need to know what the narrative designers were thinking and follow their logic. But since it’s so wide and open-ended, it’s very easy to overlook or misinterpret clues, and end up wandering in circles. Sometimes it’s reasonably clear, like doing a bit of minor social engineering to crack a password, but other times you need to do some lateral thinking to even begin to make any progress, and it can be incredibly vague. There is a fourth wall-breaking hint area, but even that won’t tell you direct answers (most of the time). In some ways, this is an unavoidable effect of the “browse at your leisure” design, but some kind of stronger direction would’ve been nice. 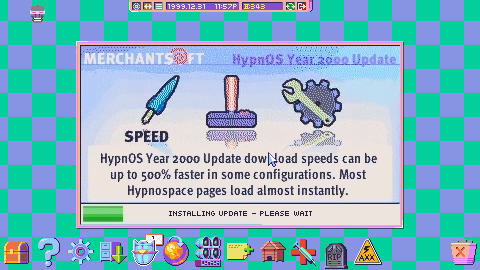 Ultimately, how much your enjoy Hypnospace Outlaw is proportional to how much time you spend immersed in it. Major plot developments only really hit home if you’ve spent some time getting to know the people that were affected, especially since, outside of your select few co-workers, they’re just people that you read about, rather than characters you directly interact with. Otherwise, the best moment are ones you can find personal joy in, perhaps reading some of the terrible fiction and recalling your own awful attempts in your youth, or pirating all of the songs in a hidden directory before reporting their host to your superior. Still, it’s rare for one to want to return to an adventure game when it’s completed, while Hypnospace Outlaw has so much extra content that you can spend at least a few hours stumbling around outside of the core story, finding stuff you’ve never seen before. There are even separate tools that let you create your own webpages and sequenced music, to share with others, as something like this has the potential to be endlessly fascinating.