At the end of the original game, ToeJam & Earl managed to rebuild their rocket ship and return to their home planet on Funkotron. The bad news is that a thousand earthlings or so managed to stow away in their two-seater ship, and now the earthlings running all over the planet. Even worse, the Funkapotumus, the leader of Funkotron and source of all funk, has gone into hiding, draining the funk and color from the planet. ToeJam & Earl take it upon themselves to fix the mess, mostly so they don’t end up getting in trouble. 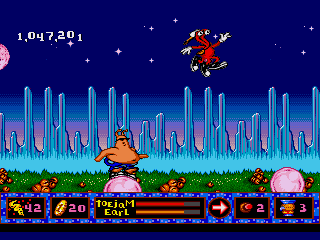 While the original game was a roguelike of sorts, the sequel is actually a platformer. It’s a pretty big shift in genres, but it makes a nice change of what would have basically been an expansion pack to the original game. There’s a lot more variety than the original game had to offer, even if you can expect to see the same things every time you play. While the randomization is gone entirely, it does help the sequel feel a little tighter in design, which makes up for it. The game still has a bit of a laid-back feel to it, so while there’s a decent amount of fighting involved, the focus still feels like it’s more about exploring and finding secrets. You’ve got the option of playing as ToeJam, Earl, or both at the same time, if you’ve got a friend around. The splitscreen feature from the original game doesn’t return, however, so both players will basically be bound together by the screen. There’s also a “Lil’ Kids Mode”, which makes it impossible to die, but ends the game about a third of the way into the game.

The game itself is split into fifteen stages, with each one having the goal of finding and capturing every earthling. The arrow on your HUD will lead to the nearest earthling, and once you find them, all you have to do is chuck jars at them until they get trapped inside one, and then walk over to pick them up. Repeat this until you’ve captured every earthling, throw them into the rocket at the end of the stage, and exit the level. By getting catapulted into space and somehow landing safely in the next level. Of course, the earthlings will fight back, and you’ll have to deal with threats like small children, cow spirits, construction workers, and naked guys who sit in cardboard boxes and sing opera. 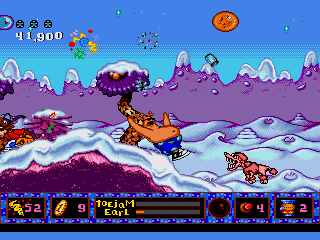 There are still presents floating around you can pick up, but their contents are no longer random. Funk is the most common powerup they’ll give you, and it lets you teleport short distances and through certain walls. You can also use it to scan the area near you, which will reveal hidden items and earthlings. Coins can be spent to activate various things, and points which go towards extra lives. There are also super jars, which make it much easier to capture earthlings. There’s also two special items that can be activated at any time, although they come in limited supply. The panic button makes your character run around throwing jars all over the screen for a few moments, while the funk vacuum sucks in every earthling on the screen and jars them up for you. There are also no longer any presents that can harm you, which helps make the game somewhat easier.

The levels are full of stuff to mess with, a lot of which will give you points that’ll go towards valuable extra lives. Occasionally, you’ll come across another citizen of Funkotron, who you can give coins to get into a simple rhythm game. You hit the A, B, and C buttons in time with their pattern, and the better you do, the more items you’ll earn from it. There are also bushes and trees to search, some of which will drop presents, some which hide earthlings, and some of which drop bowling balls and trash cans on your head if you don’t dodge out of the way. Coin meters and buttons can send you to different places or make different things appear. There are bubbles to balance on to get to new places, and spongy fungus that you can bounce on. There are even a few times when you’ll perform on this fungus for a series of judges, and you can earn a lot of points if you’re good at it. There are also a few underwater areas you can swim around in to find extra stuff, although you still have to keep oxygen in mind. 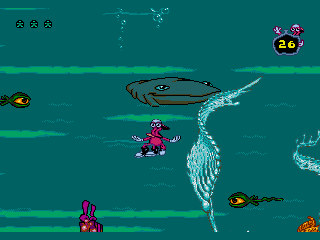 Since you’re back on your home planet, there are a lot of your fellow aliens hanging around. Some will give hints about secret areas, some will drop bits and pieces about the plot, and some are just there to chat with. Some of them stay at home where you can ring their doorbell, and if you’re feeling cruel, you can keep ringing their doorbell until they start screaming your name at you. Certain secret areas will lead to an area called “Trixie’s Rendezvous”, where a vision named Trixie will give you a special power that will last until the end of the level ,like unlimited coins. There are also twelve of the Funkopotumus’s favorite things scattered in hidden areas throughout the game, and finding all of these will lead to a longer ending and a huge point bonus at the end of the game.

The problem is that it feels like the game gives you all this stuff right from the first couple of levels, so you basically see everything the game does pretty early on. It doesn’t ever really introduce anything new, it just puts all the elements together in gradually harder combinations as you go. That’s not necessarily bad, and the game has a decent difficulty curve. It’s just that most platformers tend to introduce new obstacles and challenges as you go, so seeing everything the game can throw at you by stage three is a little disappointing. It does make the game a bit repetitive, although the game’s nice enough to give you passwords every second level. No longer do you have to keep your Genesis plugged in overnight to have any chance of beating the game, nor do you have to do it all again if you run out of lives. 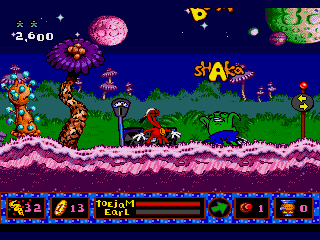 Most of the game’s difficulty comes more from the exploration part of the game, since there’s secrets crammed pretty much anywhere you look in the level. A lot of the secrets, like the hidden objects you need for the best ending, are hidden pretty well, and you only have one chance to find them. On the other hand, since the only thing that can hurt you aside from the earthlings is either drowning or fire, you don’t have to be nearly as cautious as you did in the original T&E. The earthlings can be real pains to fight at times, and some of them can and will juggle all your health away if they get you stuck in a corner. This is mostly because the game never gives you any sort of mercy invincibility, so enemies that can hurt you by touch, like the guys with jackhammers, can do major damage very quickly. The good news is that you’re expected to be able to fight back this time around, and extra lives are much easier to earn.

You never got to see much of Funkotron in the original game, and the side-scrolling perspective this game takes lets you see a lot more of it. The art style looks like something straight out of Dr. Seuss’s books, which gives the game a really unique look to it. Everything looks as weird as alien as it should, from the weird, curvy trees to the spongy pink fungus you can bounce on. This game’s even goofier than the original game, since you have things like dead cow spirits that can possess you, forcing you to stand still and moo. Unfortunately, it feels like the game runs out of environments just as quickly as it runs out of unique level features, but the ones that are there look great. The music has the same hip-hop/funk style to it as the previous game, although the GEMS hardware the sequel uses means it’s not quite as funky as the original game. 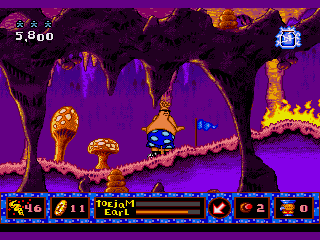 Overall, Panic on Funkotron isn’t a bad little game, although it’s not going to win any contests against the Sonics or the Rocket Knights on the Genesis. It can’t really be compared to its prequel since they’re entirely different genres, so they’re best both measured on their own merits. While the novelty of having an action-based roguelike on the Genesis was certainly interesting, the sequel stands as a more consistent game overall.

Much like the original game, the PSN and XBLA versions offer online co-op and achievements, among other things, while the Steam version isn’t much more than a straight emulation.