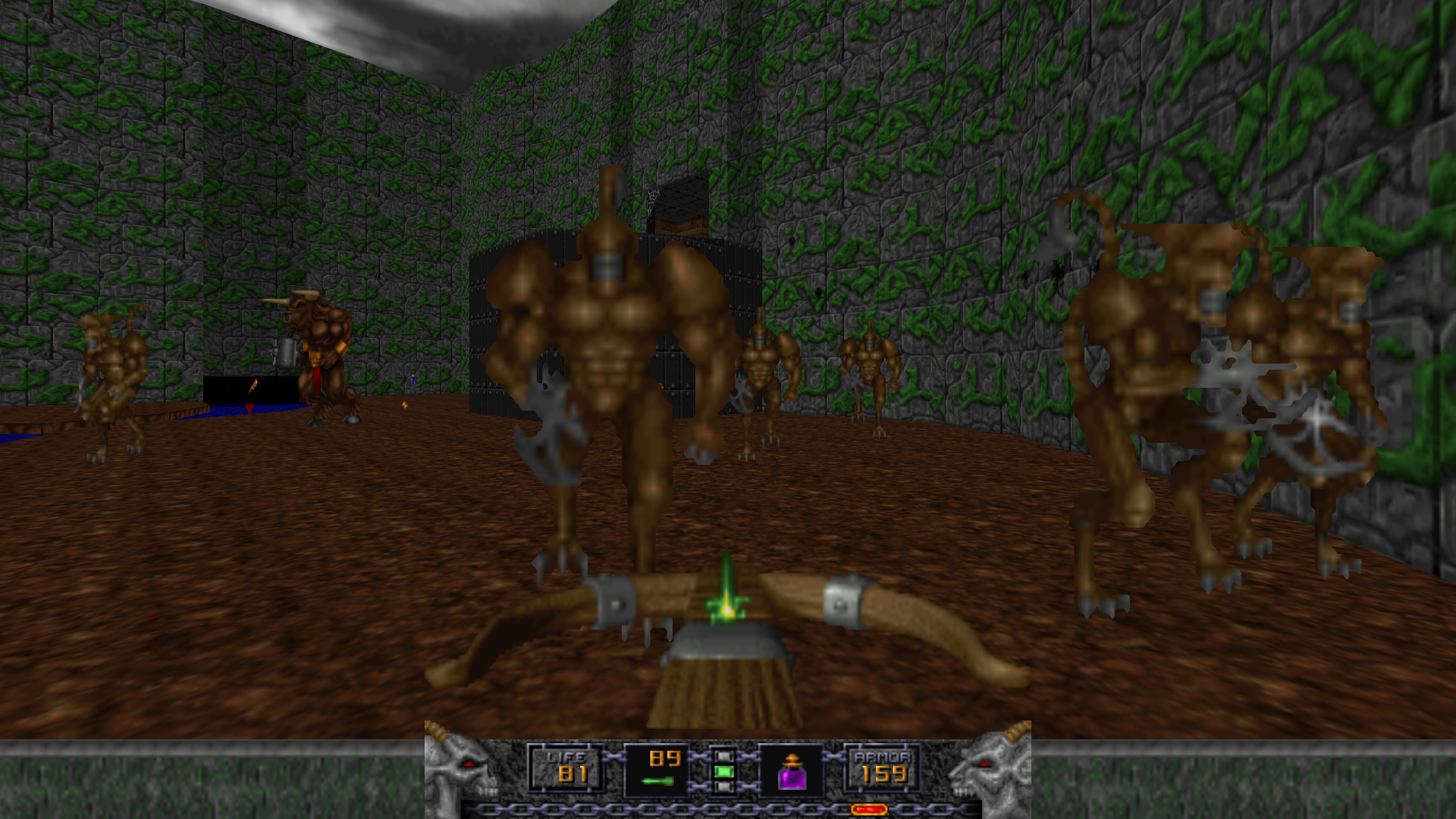 For each industry defining game in history, there are the games that sit in the wake of the tsunami of their influence.  More than mere clones, these innovate on the original formula, and bring new ideas to the table  They are really good games in their own right that live forever with the comparison to the original. Saints Row is GTA but goofy, Silent Hill is Resident Evil with David Lynch influence.  Heretic is Doom, but fantasy, though it took a little while for the series to grow out of its originator’s shadow.

Built in the Doom engine, Heretic was published by ID software and released March 1994, three months after the release of Doom. The game was developed by Raven Software, founded in 1990 and still a major player in the FPS genre today.  Raven was purchased by Activision in 1997 and it was involved in everything from the development of Quake 4 and Wolfenstein (2009) to its current yeoman work on nearly every aspect of the Call of Duty series. 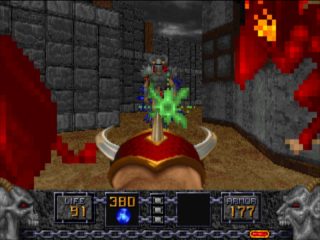 At the time of the sale to Activision, six developers from the Heretic team left the company to form a new studio, Human Head Studio.  This team would go on to create Rune, a third person Hack and Slash set in Norse mythology and Prey (2006), among others, before closing its doors in 2019.

Heretic’s original release is divided into three Episodes, though any modern version you buy will contain the full expansion, Shadow of the Serpent Riders and will contain five Episodes (and a hidden, mostly useless sixth episode).  There are eight maps, along with maps hidden level, in each of the three original episodes of Heretic, as Corvus explores the City of the Damned, Hell’s Maw and finally the Dome of D’Sparil.

Heretic, like Doom before it, leans into the FPS power fantasy and revels in it.  When you pick up a new weapon, Corvus laughs in anticipation of the destruction to come. Action within each map is often contained within circular layouts, full of secrets.  Pounding the space bar on every wall you approach will be rewarded with hidden areas and power ups.  Keys of a certain color unlocked doors of that same color.  Levels are filled with surprise “monster closets” and from the second level users will find themselves opening small rooms packed with enemies ready to pounce.  The level design itself is good, if not familiar.  Rarely will a player get lost without an idea of where to go next.  Challenges are plenty and most often take the form of more and more enemies.  As the game progresses, difficulty is often ramped up by throwing more and more enemies at you and the core 90s FPS strategy of circle strafing is key to success here.  The game features auto-aiming, but builds upon the 2.5D Doom Engine by allowing the user to look up and down with Page Up and Page Down.  This is a nice feature for the time, but anyone playing this now with decades of ‘mouse-look’ experience will find it cumbersome and will want to play with the available mods to support full mouse control. 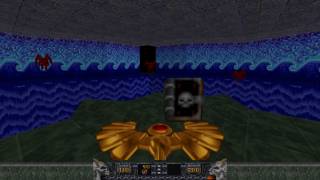 The weapons feel familiar and for good reason, each one has a replica in the original Doom.  The Elevenwand is the equivalent to the handgun in Doom, providing a steady rate of fire, lots of ammo but low damage. The ethereal crossbow is like the shotgun. It fires three projectiles at a time which will split off to hit multiple enemies if there is more than one in front of you.  Hit something with all three and the damage is heavy and very satisfying.  Even the chainsaw is represented by the gauntlets of Heretic, creating a satisfying way to mow through enemies with a more personal touch. The weapons are different enough to make them feel unique and relevant to the setting, but similar enough to be familiar to a Doom player.

Heretic does contain some key innovations in the genre that set it apart in the genre and would become staples of the franchise.  Most notably, the inventory system.  Users can pick up items which are, like the weapons, often mirrored on Doom. However instead of instantly using them they can store them for key moments, accessible from a menu.  Two highlights include the Morph Ovum, which transforms enemies into chickens.  Plays hit by the Morph Ovum will turn into a chicken with 30 health and a weak peck attack.

The second highlight, and the one that would become a symbol of the entire series (and a character in Heretic II) is the Tome of Power.  Upon activating, Covus turns into a near God with modifications occurring to all weapons that bring glorious destruction.  Weapons fire faster and with more projectiles. The Gauntlets now suck health out of the enemies. The effect lasts 40 seconds but the impact creates some of the most memorable experiences in the game. The downside to the inventory system is it is not accessible by hotkeys and in more frantic battles can be an inconvenience to cycle through to find the right item. Regardless, the system is an innovation for its time and genre that would be replicated and improved upon until it becomes the standard in first person shooters. 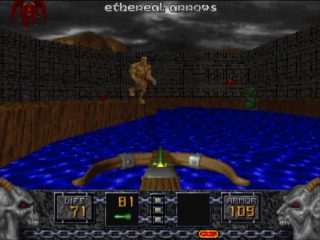 Heretic also innovated on the Doom engine by pushing what could be done within the confines of a 2.5D engine. The player is granted flight and the ability to look up and down using Page Up and Page Down.  Weather effects are used in level design and enemy attacks to create new feels to the controls.  Pushable objects, better translucency and ambient sound effects combined to create a world that felt that much more ‘real’ within the confines of the engine.

Episode 1 (City of the Damned) ends with Corvus defeating guardian Iron Liches and sealing “hell’s maw from the other side” to ensure worse things don’t come through. Episode 2 is set in Hell’s Maw (and named as such) and introduces another innovation, the elements. Ice, which is featured in Hell’s Maw for the first time, joins wind and running water as environmental hazards that can shift a player’s position or change expectations around movement. Slipping on ice is never pulled off more creatively than a little more movement on the X-axis, but again it is a unique attempt in the FPS genre to distinguish the experience.

Episode 3 has Corvus entering the Dome of D’Spairl and finally facing D’Sparil himself.  Once defeated the original game is completed and you shatter the dome into a million pieces.

Two years after the original release of Heretic, the final, retail version of the game was released as Heretic: Shadow of the Serpent Rider containing Episode 4 (The Ossuary) and Episode 5 (The Stagnant Demesne).  These episodes are the hardest of the original Heretic, containing 8 levels each (and an additional hidden level per Episode).  They feature no new enemies or weapons. Episode 6 is a hidden set of three levels, only accessible by a cheat code.  It contains a recreation of Raven’s office space, one genuine level that appears to have been designed for an unreleased six episode and a third and final level developed by American McGee which contains no exit.  There is a deathmatch and four player co-op mode, both accessible via LAN or online using modern tools.

Heretic’s story, told mostly through the game’s manual, features three Serpent Riders who invade the earth, creating worshippers called “The Order of the Sign”.  Their influence is global and the seven kings of the Earth, described as “cattle”, follow the Serpent Riders as they cleanse the earth.  The first game focuses on a villain called D’Sparil, the first of the Serpent Riders and the final boss of Heretic. The other two Serpent Riders are the lead antagonists of Hexen and Hexen II respectively bridging all three games under a cohesive story known as the ‘Serpent Rider Trilogy’.

An ancient Elven race, the Sidhe are unaffected by the lure of the Serpent Riders and mount a defense. Unfortunately it doesn’t go very well and the earth is opened and engulfed in flames. The opening of the earth unleashes the forces of D’Sparil and this is where our hero emerges. We play Corvus, a Sidhe of Parthoris, though he will not find out his name or homeland until Heretic 2, some five years after the release of this game. With much of the Sidhe dead or in hiding, we begin the game in search of D’Sparil and travel through the ‘City of the Damned’, Heretic’s first world. 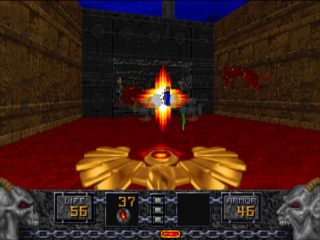 The stories for Heretic and Hexen are good backstory and only improved over the four games in the series. It’s a risk and rare to see a game so clearly pitched as a trilogy not only get to see that promised story through, but build upon it with a fourth game in Heretic II.  Future games in the series would do a better job at storytelling outside of the manual, but Heretic does well at building a world different enough from Doom that really sells the Dark Fantasy setting.  Heretic’s executive producer, John Romero contributed some historical lore to Heretic on Twitter in 2019, claiming the game and its sequels are prequels to the Rise of The Triad series.

Modern ports of the game can be played on GOG or Steam however the march of technological progress has not been overly kind to its sprite based, 2.5D engine.  The (literally and narratively) dark levels means some of the sprites don’t translate well to larger screens and resolutions.  It’s not uncommon to be ambushed by a series of enemies you didn’t see in the dark because their grey pixels are only a few notches lighter than the dark rooms they inhabit.  Heretic being built on the Doom Engine means it is compatible with the source port, ZDoom and it makes a modern playthrough a little more enjoyable on current systems.

Heretic is a very good game and an important part in the history and evolution of the first person shooter genre.  It’s challenging, innovative and was an important contrast to what Doom was revolutionizing in 1994.  Its continued availability makes it an accessible, worthwhile experience for anyone interested in the nostalgia of their youth, or as a sample of an important milestone in the FPS genre.