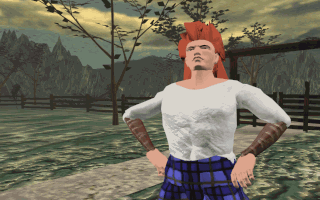 In the early ‘90s, computer rendered graphics were all the rage, ignited by fancy effects in 3D movies and carried by the burgeoning popularity of the CD-ROM. French development studio Cryo, who had previously worked on oddball adventure games like KGB and Dune, was one of the early adopters of the technology and used it consistently up until their closure in 2002. One of their first attempts was a full motion video racing game called MegaRace; their next was an adventure game called Dragon Lore.

The story is generic fantasy tripe and takes place in a world where humans and dragons coexist. Werner, the infant son of the von Wallenrod clan, is nearly kidnapped by the evil Haagen von Diakonov, and whisked away to live a life of anonymity as a farmboy. Upon reaching adulthood, he is informed of his heritage and sets off on a quest to be inducted into The Order of Dragon Knights. This is accomplished by exploring the land and winning the favor of the sixteen Dragon Knights by running quests, as well as taking vengeance on the man who killed your father. 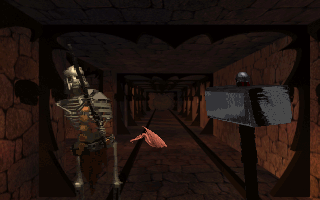 Like Cryo’s other adventure games, Dragon Lore is played from the first person perspective, although the interface has been reduced to a single icon for movement and interaction as you click frame by frame through the world. While ostensibly shallow, the game makes up for it with its relatively expansive game world. Compared to the likes of The 7th Guest, Myst or The Journeyman Project, Dragon Lore has many, many more frames and a substantial amount of animated transitions. While movement is still restricted along very particular paths, it makes the world feel less like a series of narrow corridors and more like an actual world.

In order to render this many frames, it’s clear that sacrifices had to be made, affecting the quality of the artwork. Not only are the screens boring in design, but the texture work is positively ugly, and the boxy, poorly animated character models are laughable. The entire game is displayed in low resolution VGA as well, which means it was quite speedy on the slower computers of the time, but also results in a game that looks like a drunken, blurry mess.

There is little else going in Dragon Lore’s favor. The plot is sparse and dull, with the first half being an adventure across the land to reach your opponent’s castle and the second half encompassing the castle itself. The puzzles are rarely anything more than scavenger hunts, with the only other focus being the combat. In addition to the usual inventory items, you can equip various manners of weapons and armor to do battle with a variety of foes. This might sound like an exciting change of pace, but it’s executed about as awkwardly as you’d expect. It’s strange to see animated sprites moving in a 3D space over a 2D image, and the perception of depth never quite feels right. Actually fighting enemies involves little more than right-clicking furiously and hoping the enemy doesn’t get close enough to land any hits. There are no hit points or any other stats, leaving you to guess at your health. And given the node-by-node movement, you can technically just click your way past enemies anyway, even though they’ll usually catch up to you at some point. The only real advantage any of this offers is that there are usually peaceful and violent solutions to various problems. Early on there’s a dog-monster-thing in your way, and you can beat it to death if you like, but the proper solution is to give it a bone. Your bloodlust will affect the votes of the other Dragon Knights in both positive and negative ways, since some are crazy enough to approve of your wanton cruelty. 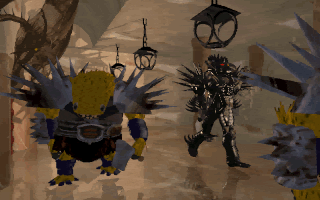 The expansive, immersive 3D world is really the only thing Dragon Lore has going for it. While there was a point in time when that was enough, it has long passed, marking Dragon Lore as a relic of its time and little more. Initially released on 2 CDs for the IBM PC, it was later ported to the 3DO console as well. A later re-release called Dragon Lore Gold adds several short cutscenes, substantially more music tracks and sound effects, and numerous bug fixes.