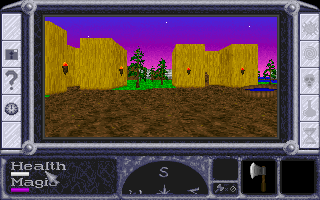 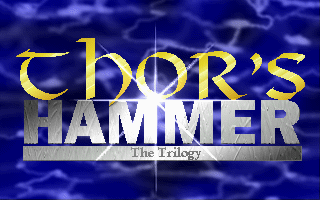 Thor’s Hammer Trilogy, a nearly unheard-of 3D game from 1995, was one of the many type of games found on those shareware game compilation CDs. You know the type: cruddy menus reminiscent of Windows 3.1; often banked on the inclusion of a popular FPS demo to make the sale; and jam-packed with crate-loads of goofy, obscure games ranging from archaic to state-of-the-art(-for-1995), half of which didn’t work either way. Ah, the Silver Age of PC gaming.

Thor’s Hammer falls somewhere between FPS and dungeon crawler. Looking at the screenshots it’s easy to mistake it for an RPG of some kind, but it’s very stripped down in that regard. There are no shops or currency — the available weapons and spells are simply scattered across three episodes’ worth of dungeons and landscapes, often left in nondescript treasure chests. Since this is a hack-n-slash, that’s not really a problem in itself. However, it does make searching for secrets a relatively unrewarding chore, given that the only loot you’re likely to find are potions or keys, or maybe the rare throwing axe (there seems to be a total of nine in the entire game). All the important stuff like armor, weapon upgrades, and spells are left out in the open for you. And don’t expect character depth: the NPCs sometimes spout exposition, but are mostly just window dressing. The only “characters” to speak of are the wizard Tyr and the Demon, and they’re not much more than plot devices.

The physics are a bit awkward, mostly due to the fact that everything has a bounding box twice the size of its sprite. This especially applies to you, the player: you’ll frequently curse the programmers when a fireball that looks like it’s going to miss by a yard still scores a hit on you, yet to collect potions or retrieve your throwing axes you have to be right on top of them! So grabbing important items while dodging enemy fire becomes a festival of nonsense and broken keyboards…especially when you throw the control issues into the mix. ALT to strafe, ENTER to throw axe? Good luck hitting that orc without toggling fullscreen!

It does have catchy music though, ranging from haunting to funky. The minstrel tune used as the overworld theme is rather nice. 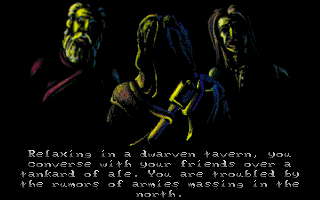 This guy is no hero, he has an axe protruding from his back!

You are a nondescript traveler with some experience as a soldier, who lives in a very Norse land being terrorized by the forces of the abominable Demon. The wizard Tyr elects you as the lucky guy who gets to seek Thor’s legendary hammer, then plant it in the Demon’s face. The adventure spans three episodes: the Trial, the Journey, and the Battle.

In the Trial, Tyr sends the hero to a coastal town being terrorized by a necromancer (along with a number of other unpleasant fiends). Tyr’s idea of Hero Boot Camp is to leave you with nothing but a woodsman’s axe and the task of killing the necromancer. Thanks, Tyr. At least this episode has a lavish introduction: the other two episodes just throw you into the action with little more than a text blurb. 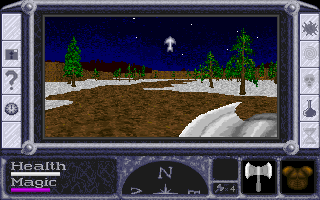 The icy wastes of episode 2, and my awesome new axe

With the wizard’s trial completed, you’re ready to take the Journey. At the deepest reaches of a snowy wasteland is the lair of the nasty giant who keeps Thor’s Hammer as a mantelpiece. You get to freeze your ass off walking through the snow and fighting through various thieves’ dens before prying the hammer from the giant’s cold, dead fingers. 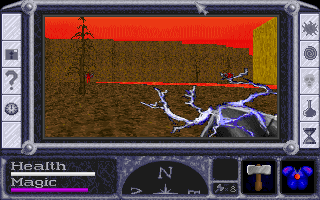 Finally, with hammer in hand, you are ready for the Battle. This episode is set in the volcanic lair of the Demon. It’s a pain in the ass.

The gameplay mostly consists of navigating labyrinths (or large outdoor areas) and slaying monsters. You travel between maps by using rickety wooden ladders leading through the floor or ceiling; upon returning to a previous map, you may find all the monsters have respawned, but this isn’t always the case. Each episode features a few puzzles to mix things up a bit: they’re usually near the episode’s end, and usually require more dexterity than brainwork to solve. A few of them are pretty tricky and add some much-needed variety to the monster slog.

The first boss is the Necromancer: he moves away from you and shoots highly damaging beams at random intervals, just like the regular wizard enemies (unlike the wizards, he has a wickedly gruesome death animation compared to the rest of the bestiary). The second boss is the Giant who wields Thor’s Hammer: he merely lumbers after you, just like the scores of melee thugs you’ve waded through to get to him (kills you in about two hits, though, and takes a boatload of punishment). It all might seem so tedious to get to the end, but the battle with the Demon is the hardest and most clever puzzle in the game, so it’s kind of worth it. 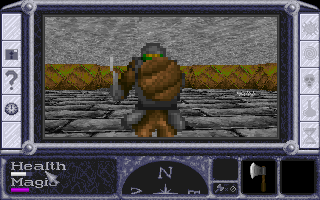 Thor’s Hammer is pretty minimalist when it comes to heroic gear: primary weapon (usually an axe), throwing axes, five spells, and damage-reducing armor. And pretty much all of them bring their own design flaws to the table.

Let’s refer to the primary weapon as “the mauler”. Throughout the adventure your mauler upgrades from a measly woodsman’s axe to a two-bladed axe, then enchanted two-bladed axe, then finally Thor’s Hammer. You gotta get up close and personal to use your mauler, and it uses the annoying RPG mechanic of calculating hits and misses for you. It would’ve been nice if you could loot dead monsters’ weapons, because theirs are a helluva lot more accurate.

“Almost” only counts for horseshoes and hand grenades…and apparently, throwing axes. Unlike your somewhat pacifist mauler, your axes are wonderfully eager to kill things for you: once airborne, they’ll dive into the flesh of any target that comes within arm’s reach (back to the bounding box issue, which explains why they’re impossible to use in corridors), dealing a third of your current mauler’s damage. You can’t use them at point blank, though, and making ENTER the “throw axe” key was an unfortunate design decision, because the key combo for strafing and throwing is the same combo for toggling fullscreen. They’re glitchy, too: axes can land in solid objects, and even vanish permanently.

There are a total of five spells in the game: Fireball, Tornado, Heal, Kablooie, and Time Stop. Invoking each drains your magic meter by a large amount. That’s okay, though, because there are bottles scattered all over the game that restore health (white bottles) and magic (purple bottles). That is, it would be okay…if the bottles restored more than 5 units. Not so bad early in the game when your health and magic meters are about 25 units each; by Episode 2 they’re virtually useless, even in large abundance. One boss battle provides you with no less than 20 or even 30 magic bottles: all of them together, for a maxed-out magic meter, amount to a single full restore. In summary: spells are reserved for emergencies only. Also, don’t get hit by anything.

There is a “full heal” object in the form of a glowing square you sometimes find on the floor — step onto it and receive full health and magic! Some are one use only, others are infinite use, and all are few and far between.

Thor’s Hammer Trilogy is still somewhat recommendable, if only as a curiosity from the DOS era. Or maybe for gamers who don’t have a head for inventory management or sidequests, yet still want a retro fantasy adventure of epic proportions. It’s a charming little piece of neglected gaming history, and it’s almost worth it to give the poor thing some attention for a few hours.

Hexen did it better, though.