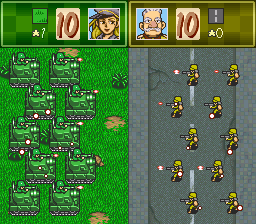 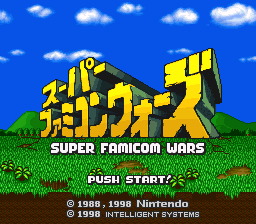 Super Famicom Wars is a bit less of a sequel to Famicom Wars and more of a remake seeing the return of the military struggles of the nations of Red Star and Blue Moon. It was initially only released as a downloadable game for the Super Famicom Nintendo Power service in Japan, though it was re-released on the Wii and Wii U Virtual Consoles. As a result, it’s never received a physical release, nor has it officially been released in English, though a fan translation exists. It retains the classic maps of the original, and follows the basic turn-based war-game structure. The musical tracks also return with a shiny new coat of paint, and even the intro video is similar in structure with goofy little cartoon soldiers using silly tanks and buffoonery to attack each other. Where it differs is the game’s visual stylings and the updates to the gameplay.

Many units that served multiple functions have been divided into differing units offering more specialized purposes, with new units also available for deployment. An optional rule allows units that survive long enough to promote and have enhanced statistics. There are a set of extra maps that include new gameplay elements, and see the battles being waged by two new nations: Yellow Comet and Green Earth. There are now also Commanding Officers (Commonly called COs) that represent the given nations, and some unaffiliated COs. The national COs have differing strategic AI to draw distinction from them, as well as little animations. The unaffiliated COs however have bonuses that change up their gameplay a bit, though in general they’re largely just plain better. There’s even 4-player maps available. A new game mode, called Fog of War, has been introduced. Fog of War games make use of limited unit-vision, and result in a very different manner of play since if you can’t actually -see- a unit then that unit can’t be attacked. Finally, the game boasts far smoother interface execution and quality of life.

Representing Red Star is Yuan Delta. He is described as a skilled commander, and of the four national COs is the one that has the most effectual performance

And in the other corner, the Blue Moon commander is Rojenski who considers himself to be Yuan’s rival. He takes a balanced approach similar to Yuan, but is decidedly less competent.

Taking the helm of the new Yellow Comet is Fon Rosso. Fon’s AI is one that prioritizes aggression, though it lacks foresight on defending well. Still, aggressive is generally a good way to play so his AI can be decently formidable.

No, that’s not an altered image. That is the face of the immensely questionable and hilarious in equal measure Hetler. Yes, that’s his name and he runs Green Earth. He’s a coward, his AI turtles like there’s no tomorrow so winning against him isn’t difficult, just tedious.

The first of the unaffiliated is Caroline. Often affectionately called ‘proto-Nell’ among the player base, due to her resemblance to the character in later seen in Advance Wars, Caroline has a luck mechanic that causes her units to do extra damage with reasonable occasion. Her AI is above Yuan’s caliber.

The second unaffiliated CO is Billy Gates, presumably supposed to be the fictional son of Microsoft founder Bill Gates. He’s a rich kid who adds his personal funds to his army, providing him with an additional 10,000 funds per turn which is pretty outlandish.

And finally we have Mr. Yamamoto. Without question the most difficult CO to deal with in the entire game, all of Yamamoto’s units deploy with two promotions, making them all deal and receive 40% more and less damage. This holds true even if the promotion rule has been disabled. If playing against Mr. Yamamoto as an AI, the player will find dealing with him to be quite taxing indeed. 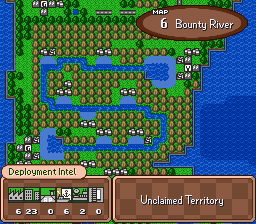 Visually the maps are cleaner to look at and are significantly less busy. The color balance also generally helps to make identifying where a unit is on the map far easier, which is a great help to colorblind individuals. The unit sprites are now animated both in and out of battle, both aiding in finding the units and giving them a little touch of personality. When resupplying vehicles, little gas cans will be tossed around, while when resupplying infantry the thrown object will instead be a loaf of bread right into their mouth. When destroying a Lander while it has soldiers or vehicles upon it, the faces of the soldiers will freak out before they get sent into the drink. While most of the music is recycled from the original, there are a few new tracks to be had. The arrangements and new compositions were made by Yuka Tsujiyoko who was heavily involved in the music for the entire series of Fire Emblem. They serve their purposes adequately enough, though none of the tracks particularly stand out other than the track that could be regarded as Caroline’s theme.

Gameplay is much refined, deploying units and moving them around is far quicker over the original Famicom Wars, resulting in a much more reasonably paced and smooth experience. A particular quality of life improvement being a chart that accurately conveys just how much damage a unit would do against another given unit and this is updated for the consideration of the unit’s rank and other matters. Unfortunately, the game does suffer from some lingering fundamental design flaws. The trend of factories being large in number, but all localized around a player’s HQ means that matches tend to be drawn out affairs, with reinforcement of the front lines being difficult due to all units taking several turns to arrive. Some units that are of value in concept are functionally worthless in practice, the ‘anti-air artillery’ being such an example of this that it never returned in later entries. Maps are generally not particularly balanced, broadly favoring the second player due to the assumption of their being played by the AI. While the inclusion of ‘minor goal’ properties such as the Lab and the mighty Prototype Tank it produces add to the interest of play, they’re often placed in a location of distinct advantage to one player or another. Multiplayer as a result can be rather frustrating between equally skilled players who will find matches decided before they begin.

Overall, Super Famicom Wars is a worthy successor to the original, making pretty decent use of the ten years between releases. It’s still fairly playable today, but some maps are just a complete and utter slog while some units are beyond worthless in hindsight. Though it stands on its own, it does so largely in the shadow of its successors as a curiosity and the part most people know of it is the fact that it has Hetler.