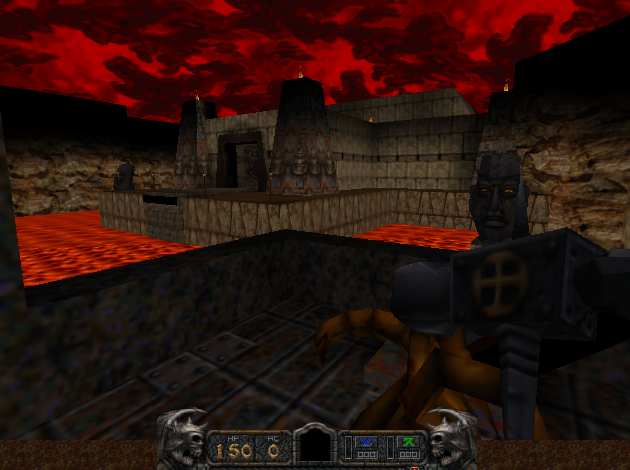 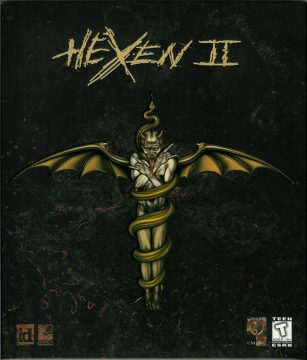 The third entry in the Serpent Rider Trilogy moves from the Doom engine and jumps fully into the third dimension with the Quake Engine, continuing to redefine how a FPS can stand out in a crowded market.  Released in August 1997, it took another step towards a unique mix of RPG elements in a quick paced FPS and continued to forge its own place in the genre. There is more attempt to relay the story through text and voice overs, experience points to gain and five unique hubs that are beautiful, but the core verb for the player remains ‘violence’.  Well, violence and ‘confusion’. The game starts with the warning; “Go in peace and you will surely die”. A suggested tagline would be, “Go without a walkthrough and you will surely get frustratingly lost.”

Hexen II takes place on Thyrion and is controlled by Eidolon, the third Serpent Rider.  He is joined by his four generals, described as the “Four Horsemen of the Apocalypse” who serve as the bosses to each Hub before reaching the final rider.   The enemies that make up the five hubs of Hexen II are some of the best looking and most creative in the series. The first in the series to appear fully in texture mapped 3D polygons as opposed to sprites, the color and details in each enemy type stand out even as you attempt to “gib” them into oblivion. 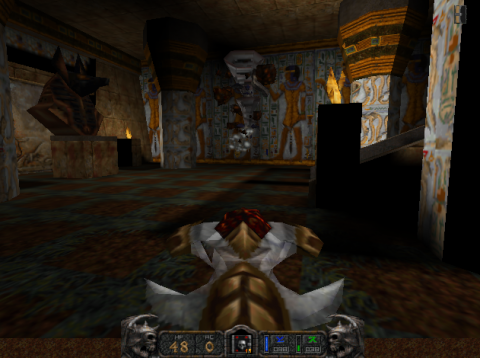 Like the original Hexen, the game shuns traditional FPS level layout in favor of five hub locations with interconnected levels.  These hub locations bring more color and variety to the series than the previous two installments and their individual ‘levels’ feel more connected as a whole to the story and atmosphere of the primary hub.  Players start with a classic medieval themed castle but will explore unique locations themed around Egyptian, Roman and Aztec cultures.  It is a nice change of pace from the dark fantasy settings of the first two games while not so far removed that it feels out of place.  These locations and enemies all look incredible thanks to the Raven team’s work to enhance the existing Quake engine.

The game itself features four character classes, swapping the Fighter, Cleric and Mage from Hexen: Beyond Heretic with Paladin, Crusader, and Necromanger and adding a fourth class, the Assassin.  Like the first game each character class has four unique weapons which are powered by Blue and/or Green Mana.  As with Hexen, the fourth, most powerful weapon, which uses both Green and Blue Mana must be assembled with a series of pickups (two parts now instead of three from Hexen) scattered throughout the levels. 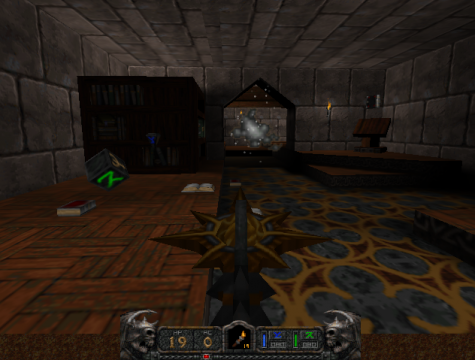 Each character class is given base statistics which affect the way it is played and these stats are far more detailed to give a sense of a Dungeons and Dragons character sheet.  Stats are randomized at the start of the game within a range reflective of each character type.  Strength stats affect melee damage, wisdom affects experience points gained.  Dexterity and intelligence stats do nothing at all though it appears they were designed to affect movement speed and mana levels, but never implemented.

As a player moves through the levels they gain experience.  Gaining levels increases mana and hit points and at levels three and six each class receives new special abilities.  An assassin receives the ability to score critical hits with a backstab, a Crusader receives a healing regeneration, and so on.  There are two special abilities for each class and they can provide an incentive for a unique approach to each character.  It is a neat feature which adds to the “D&D meets FPS” feel Raven software has been aiming to achieve since the release of Heretic.

That push; the create a game that feels like an action FPS with an RPG is what makes the Hexen series so unique but also causes some of its greatest problems. The gameplay itself feels pretty good when the focus is on combat.  The enemies do often feel a little too spongy for a game in the genre, but all in all the action is fast paced, the powerups are awesome and the weapons feel good.  It’s when the game tries to bring in the puzzle elements of an RPG that the fast paced combat grinds to a halt and the button pushing and backtracking begins. 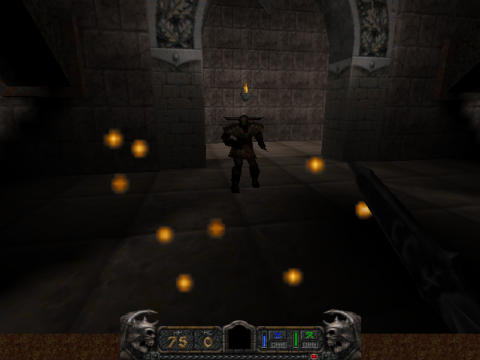 The “activate a switch in one area to open a door in another” of the original Hexen returns but with quadruple the complexity.  Players are now solving puzzles by matching symbols, creating objects to open portals, reading discarded notes, utilizing items on key objects and launching yourself on catapults to name a few.  All with minimal to no instruction on how to do it.  You will need a notebook to write down clues, endless patience and ideally a walkthrough if you’re going to get through this.  It’s quite a downer and change of pace from the action sequences and while it’s obvious what the intent was, the execution leaves a lot to be desired.  You can almost imagine a really keen Dungeon Master having designed all these interlocking puzzles on paper, excited to add the flourish needed to guide their players through the quest – but then getting sick on the day they were to run the campaign and just mailing in the rough notes for interpretation.

These puzzles will be the quitting point for many people diving into Hexen II for the first time and it’s recommended using whatever supports you can to see yourself through them as the end bosses are worth the pain.  Each of the four horsemen and Eidolon himself look fantastic and provide a challenge worth experience. Each setup in their own arenas, they reinforce the biggest frustration with Hexen.  The combat is fun, the enemies are challenging and if I hadn’t just spent the last three hours pulling switches in empty hallways this would be a near perfect package.

Multiplayer returns in Hexen II with both Co-Op and Deathmatch available. The game can be played through LAN or Online and can host up to 16 players. Having a group of friends who can each play a different character class to slog through the game together is always welcome.  The deathmatch is fine, though Hexen/Heretic were never great deathmatch games.  The items in the Hexen series often make deathmatch an uneven experience, making it less about the skill of the player and who can grab the most powerful items the quickest. It makes for an uneven challenge and quickly loses its appeal.

That said, Raven software did create and release a mod in 1998 called Siege which stands today as one of the best multiplayer modes for any FPS game.  Players are divided into two teams, attackers and defenders and asked to run through a castle siege.  Catapults and ballistae are used to pester both sides, players can be put in jail and broken out.  Each class of character is modded and provides a unique player experience as one attempts to either defend or infiltrate the castle.  At the end of the time limit, whoever has the crown is the winner.  It was a fantastic mod and one that created a truly great Hexen PvP experience.

The game was to be released on Saturn and PlayStation through Activision, but for whatever reason it was never released.  The source code was released in 2000 allowing unofficial ports to both Linux, PSP, and Dreamcast.  An official port was released for Mac in 2002.

In 1998, six months after the release of the base game, the expansion pass Portal of Praevus was released.  It featured two new hubs and an additional character class called the Demoness. The story focused on an attempt to revise the three Serpent Riders by a wizard named Praevus.  The expansion pack was praised for addressing many of the issues with Hexen II most importantly making the puzzles and hub levels more logical and pleasant to run through.  Unfortunately the expansion pack has never been re-released and if you don’t want to fork out the $200+ required to buy the original disc release, it can be difficult to track down and experience.

Hexen II itself is available inexpensively through digital distribution and is often on sale for only a few dollars.  It remains an important piece of history and despite its problems an important step in the growth of action RPGs and dark fantasy shooters.  3D Realms announced Graven in September 2020, a spiritual successor to Hexen II for launch in 2021.  In a little over three years between 1994 and 1997 a series that may have started as a “Doom-like” forged its own path in a crowded genre and ensured future dark fantasy FPS games will be forever compared to the path those three games set.