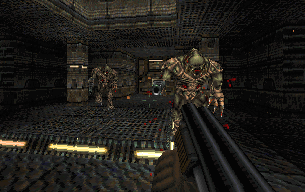 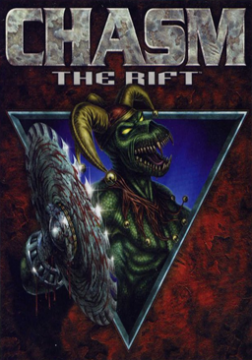 Ambiguous alien fiends known as the Time Strikers have begun an invasion of present-day earth (circa 1997) from across the space-time continuum. They’re changing the past, playing with our nukes, and making a general nuisance of themselves. The government figures maybe somebody ought to do something about these pests before they break the planet or something, so they call the guy from Quake to save the day.

He doesn’t pick up, though. So they call you instead. 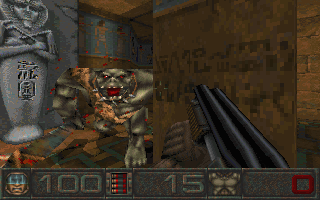 Chasm: The Rift is the first 3D shooter developed by Action Form, creators of the Carnivores series. It was released in 1997 and is often referred to as “the poor man’s Quake”, which is an apt title. It has a similar gritty style, involves dimensional travel to bloody realms of antiquity, oozes atmosphere, uses 3D models in lieu of sprites, and features a rusty status bar and grimacing, behelmeted protagonist that both look ripped directly from Quake. But is it really that similar to its big, bad cousin from Id Software?

The answer is no, for many reasons both good and bad.

It’s not as brown, for one. Whereas Quake was an odyssey of rusty bases and muddy castles, each locale in Chasm has a unique texture set with a good variety of muted colors. The art direction gives Chasm a surprisingly distinct look that actually puts Quake‘s grainy, low-poly, mostly-brown art to shame. 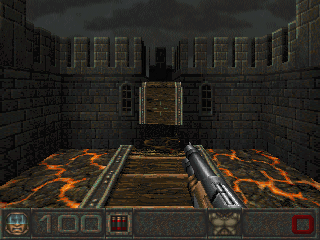 There’s more variety, for another. The player goes on a Mighty Max adventure across modern earth, ancient Egypt, equally ancient Scandinavia, and an alien citadel to kick the ass of the giant space worm that keeps farting all over the space-time continuum. There are a handful of levels in each locale, populated with monsters that are almost never seen outside of that time period: gibbering subhuman soldiers are only found on present-day earth’s military bases, lion men stick to their own turf in Egypt, and vikings naturally never set foot outside of their Norse city. Like Disruptor on the PS1, the variety of environments helps keep the game from becoming dull; and like Quake, the end-of-episode bosses can only be killed by solving a puzzle.

Unfortunately your weapon selection offers no tactical variety except “better than the useless rifle you started with”. You only ever face one or two monsters at a time (yawn) in Chasm’s cramped corridors, but they all take too many hits to kill no matter what weapon you’re using, leaving each battle a war of tedious attrition. It would be nice if the shotgun had a wide spread, and/or the laser crossbow could shish kebab monsters together, and/or the buzzsaws always cut enemies into little pieces. Anything to make them feel strategically distinct. 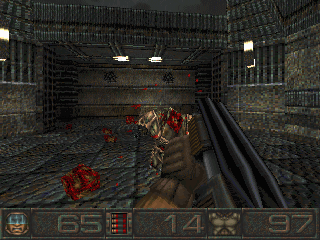 And those corridors are indeed cramped. Quake‘s maps were labyrinths of polygons stretching in all directions and taking all sorts of grotesque architectural shapes, with floors on top of floors on top of floors in true 3D fashion. Indeed other shooters of the period were much more generous with space and architecture. By contrast Chasm is much more basics: lots of right-angled walls, ceilings that rarely go higher than 128 pixels, etc. They do a nice job making the maps visually interesting in spite of these limitations (when you’re not tripping over the furniture that seems to be absolutely everywhere), but it does leave something to be desired when every level feels no more spacious than a suburban house. In that respect it’s a little reminiscent of running around the house as a kid, playing pretend, jumping on the furniture, and annoying the parents to no end.

There’s one noteworthy thing Chasm has that Quake doesn’t: hilariously bad cutscenes every few levels, a favorite staple of mid-nineties gaming. Between realms you are briefed by a white Steve Urkel who speaks in the odd, halting manner you only ever hear in Charlie Brown animated specials:

“While you were away. On your mission. The Time Strikers attacked the base!”

Sometimes he is joined by Colonel Derp, who regrettably doesn’t survive the transition to ancient Egypt. Urkel has a lot to say when he shows up, so we can’t accuse Chasm of lacking story, even if there’s not much to it. 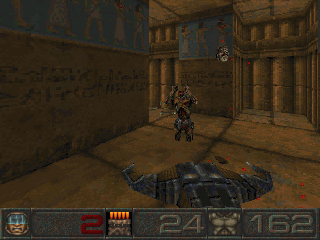 There is, of course, the overrated limb-severing mechanic which Chasm was mildly infamous for. Basically any weapon can blow off an enemy’s arms or head and force them to change their attack pattern (in the latter case, the attack pattern changes to “die”). This doesn’t make enemies die any faster, though, it just prevents more dangerous enemies from cramming rockets and lasers down your throat if you blast off their gun arm with a lucky shot. Doing it deliberately every time? Fuggettaboudit.

In its original release, Chasm: The Rift boils down to four linear episodes. The developers eventually released a very half-assed three-level add-on that introduced a new snowy environment and a new set of enemies…both of which vanish by the end of Level One, in favor of more aliens and bases from Episode Four. It leaves one wondering “What was the point?” Why not spend the whole episode in one distinct setting like the other episodes? A frosty Norse forest would have been a great addition to the original level set.

Let’s not forget that the 90s were the Decade of Deathmatch. Chasm jumped on this bandwagon, too: it features an unplayable deathmatch mode which was tossed in as an afterthought, with bad multiplayer maps and zero consideration for deathmatch weapon and spawn point placement. Don’t even bother. 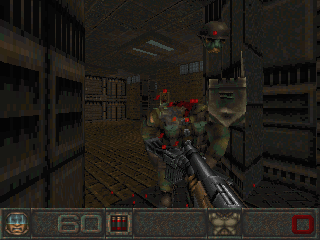 Tedious gameplay, uninspired weapons, cramped levels, and poor add-ons: it all leaves Chasm feeling pretty shabby despite its gorgeous mid-90s looks, and basically guaranteed its mediocrity upon release. But in spite of its flaws, it is still totally worth playing. It’s entertaining enough for a little while, it looks pretty damn great, the environments are cool, and the cutscenes are worth a laugh. You won’t play it as often as Quake or other, better shooters from the same era, but now and then its siren song draws you back into its chasm of ultraviolent time-travel. And who can say no to Quake‘s cute, quirky cousin?