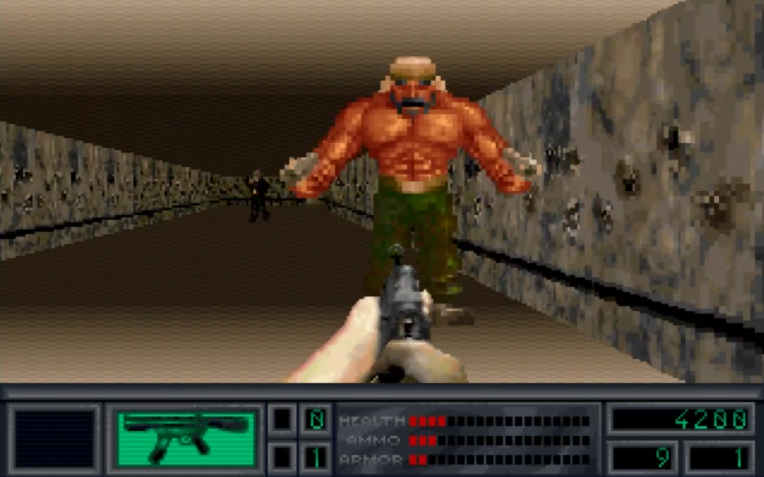 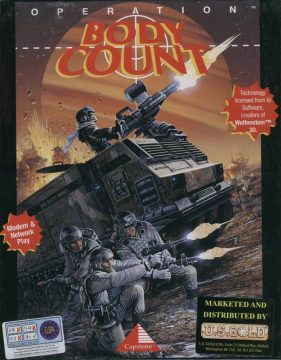 The first thing we see is “Operation Body Count” rendered in bloody text, accompanied by an unnerving broadcast about a hostage crisis at the U.N. Towers, while in the background we hear a swarm of terrorists shrieking Islamic Jihad with loony abandon.

This is followed by a striking blue and red menu screen where a random gunshot, explosion, or scream plays each time you move the selector, to hilarious effect. The demo itself consists of a single office building floor overrun by a regiment of uzi-toting terrorists, led by a hulking Arab bruiser who melts gruesomely when you kill him. You cut your way through these guys like a living lawnmower with submachine gun, assault rifle, flamethrower, and even a rocket launcher that can blast walls to oblivion, all the while jamming to reasonably groovy music. It’s Jihadenstein 3D where killing the last terrorist means instant victory, and you can set the map to randomize the locations of all enemies and items to make the game different each time you play.

Operation Body Count was dated at release, as it’s a Wolfenstein 3D clone that came out in 1994, when Doom was already king of the hill and Doom 2 was just around the corner. It was made by Capstone Software, champion developer of ugly, laughable, and boring first person shooters.

Capstone also brought us such gems as Corridor 7, Witchaven, and William Shatner’s TekWar. Operation Body Count is a less colorful Corridor 7 – using a “septic tank” palette rather than “annoying 80’s neon” – where you must clear every floor of Islamic Jihadians instead of cartoonish aliens. Like Corridor 7, the maps are tedious and indistinct from one-another, but Operation Body Count takes it a step further: no less than forty levels of identical hallways and butt-ugly textures. No objectives, no locked doors, no interactive objects except maybe a generator switch that pointlessly kills the lights on the entire floor. Get off the elevator, kill X terrorists, get back on the elevator. Repeat thirty-nine times. Or don’t, and play Blake Stone instead.

The registered version of Operation Body Count is notorious for advertising itself as a You vs. Terrorists, yet forcing the player to first fight rats and swamp things and hobos across half a dozen sewer levels before giving him a glimpse of his first actual terrorist. These sewer levels are the least of the game’s offenses. Once you reach the office levels, it’s a whole ‘nother ball game. You’ll often start a new level and suddenly wonder if your save file glitched and kicked you back to five levels ago. It didn’t. That is indeed the same map layout you’ve already seen twice within the past ten maps. The lazy designers at Capstone clearly knew what a turd they had on their hands, and phoned it in all the way to the credits screen. Hell, that’s giving them too much credit: not so much a phone as a hastily scribbled sticky note.

At least Corridor 7 had locked doors and ammo/health closets to interact with. If it weren’t for the maze-like offices, each level of Operation Body Count would indeed consist of you stepping out of the elevator, firing off a couple shots to alert everyone on the floor, racking up your kill limit as the bad guys stupidly stampede around the corner, then getting back on the elevator and moving on to the next level. The maps are designed to prevent this obvious design flaw from becoming the gameplay norm.

To be fair, the demo is actually a fun, if brief distraction. It shows everything Operation Body Count has to offer in a single, short, bloody romp that doesn’t overstay its welcome – there’s no point in offering forty levels when one is more than enough. If the people at Capstone had any brains or creativity in their heads, they could’ve beaten Counterstrike to the punch with counter-terrorism-themed multiplayer mayhem: two opposing teams, ten modifiable maps, and an end result that, while still not great, would have at least been interesting and new. Instead they just gave their other Wolfenstein 3D clone a botched facelift and made it the Joan Rivers of 3D shooters: it’s kind of amusing, but mostly sad, gross, and gets old fast.