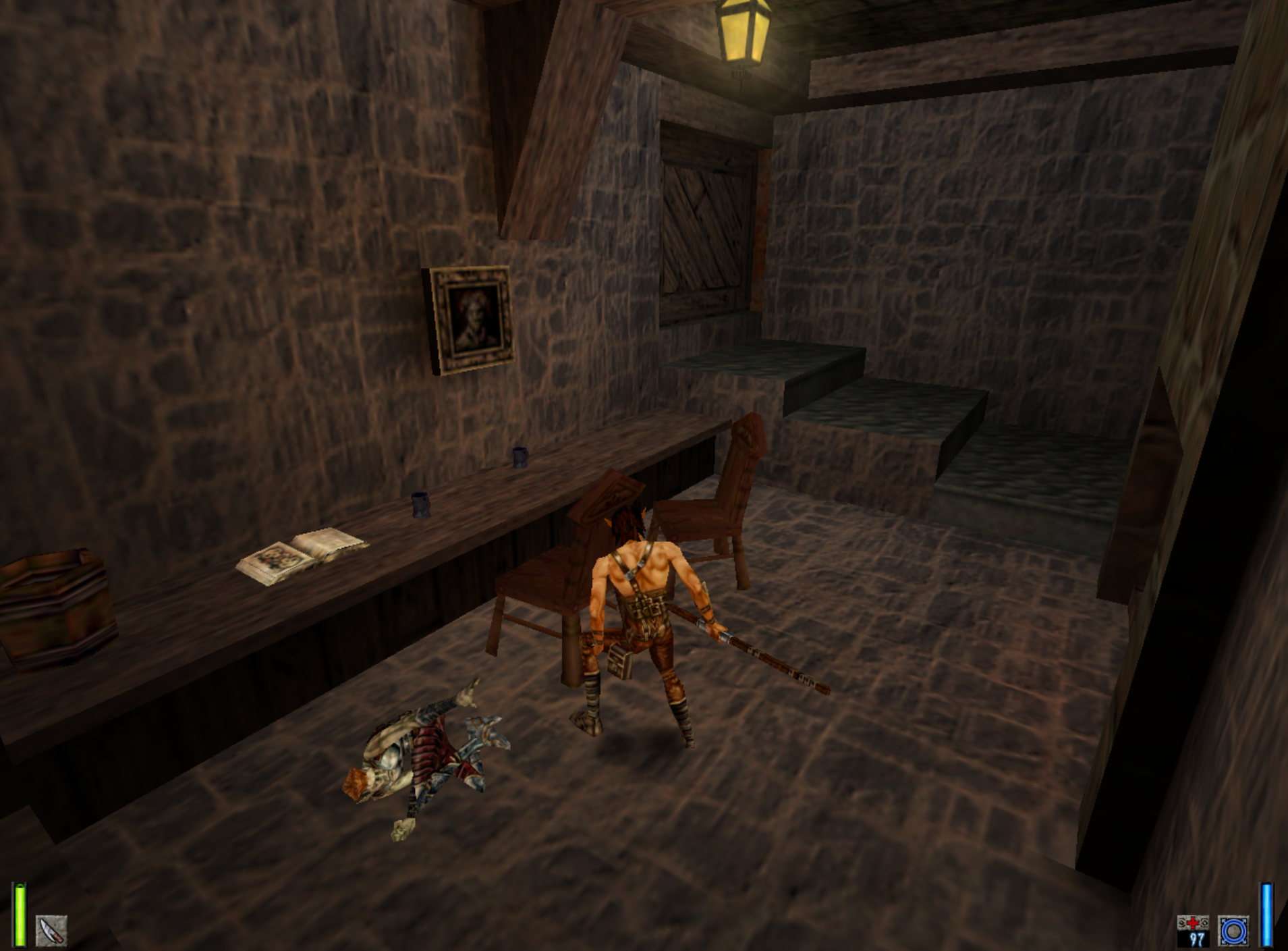 Heretic II was developed by Raven Software and was the first game not to be published or associated with ID for anything but the licensing of the Quake II engine. Brain Pelletier, who had been an arts lead on the previous three games led this project with Jon Zuk, who had previously developed a Hexen level pack and would go on to be a big part of the Call of Duty level design teams.

Heretic II sold abysmally.  Just under 29,000 copies left the shelf and it remains one of the hardest PC games to find, to this day.  It was published by Activision, the first game from Raven after being bought by the behemoth in 1997.  The success of Heretic and Hexen were the major reasons for the purchase and the development of Heretic II was called out in the original press release announcing the sale.  Heretic II was to be one of Activision’s big holiday 1998 releases and despite relatively strong critical consensus, the game did not move. Activision’s Steve Felsen blamed the game on being “ahead of its time” and believes the third person perspective turned the fan base off so much that many never gave the game a chance. 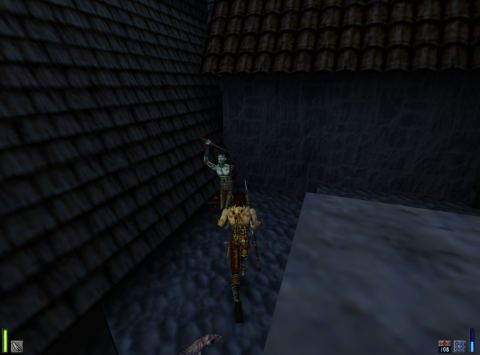 Heretic II finally names the protagonist of the first Heretic as Corvus and the game features the richest and most detailed storytelling and cut scenes in the series.  Corvus has wandered the Outer Worlds after the events of Heretic returns to his home of Parthoris to find a plague ravaging the land.  The plague causes insanity and Corvus himself is infected, however the Tome of Power holds the infection off.  The Tome in Heretic II is not just an item you pickup but a full fledged character with a voice.  It serves to not only protect Corvus from the plague and power him up at key moments but as the primary narrator helping advance the story for Corvus and the player and explain what is going on.

The serpent riders of the first three games are nowhere to be found.  The big bad guy here is a fellow named Morcalavin who used a false Tome of Power, creating the plague that is ravaging Pathoris. Before reaching him, Corvus will battle a fairly standard array of Dark Fantasy enemies from rats to harpies to chickens.  The infected, including Corvus’ own brethren, are enemies as his quest to free his people from the plague does not exclude mass slaughter of those he is seeking a cure.

Raven Software proved with Heretic and Hexen that they are experts at elevating a game from a simple clone into something innovative and fresh.  Heretic II is probably the best example of this in the series.  Working in a modified version of the Quake II engine the game utilizes a third person perspective.  Raven Software built a career on creating unique versions of popular genres, and the influence here is 1996’s Tomb Raider. Raven takes the third person perspective and mixes in their history as an FPS developer and managed to build something entirely unique.  Heretic II is fast paced, gorgeous chaos that manages many of the challenges of 90s third person games expertly while still feeling mostly like the games that defined this era. 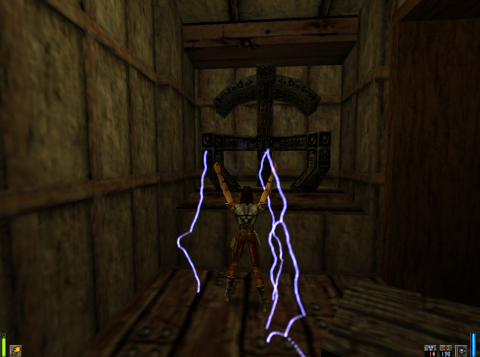 The sound and voices are particular high points, adding to the atmosphere.  A baby crying, a woman screaming add an ambient spooky atmosphere to a world ravaged by plague.  The game features full voice acting and it’s good.  Not just 1998 video game good either, actually very well acted and still holding up today.  Kevin Schilder, the lead musician for the three previous games takes the helm again in Heretic II.  The music is standard dark fantasy fare, low droning tones that compliment without overwhelming the action.  Impressively elements of wooden percussion are spread throughout the music itself, creating tension and occasionally mimicking the sound of wooden doors opening.

The move to third person adds strategy and new verbs to the gameplay formula. Corvus can run, walk, flip, pole vault and swims.  He black flips out of danger and can use four weapons and a multitude of offensive and defensive spells. There is so much more to Heretic II that the third person perspective brings and Raven does an expert job at incorporating it into a game that still feels like the rapid fire, chaotic first person shooters that led to it.  Combat is the main focus of the game and during the more intense battles it is about staffing and balancing your attacks with your available mana. Heretic 2 is comparatively easy when put up against its predecessors.  Corvus becomes very strong as the game goes on, replacing some of the strategy in combat with a more straightforward beat-em-up/magic-em-up approach to forward progression.

The game uses the Hub system from Hexen and Hexen II, laying out interconnected levels throughout a central area.  Fortunately it has improved significantly from Hexen II.  There are four main hubs and while backtracking between levels can get somewhat tiring, the levels are paced well and you spend less time running around trying to figure out where to go next and more time moving forward.  Unlike Hexen and Hexen II, you will rarely find yourself wondering what that switch you just pressed does.  Some basic puzzles are included but they are laid out logically and cohesively. 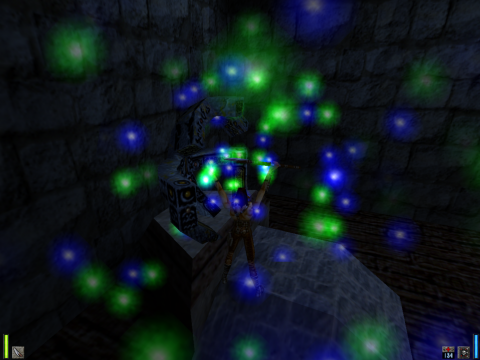 Multiplayer options exist in Heretic II, if you can find someone else who owns a copy of the game, and the cooperative mode remains the best option.  It can be very hard to get multiplayer working on a modern system, but it is a blast to replay through the game with a friend.  Lan Play offers two player co-op or up to an 8 player deathmatch.  The variety of spells makes this worth a look, if you can do it.

And therein lies one of the biggest challenges in experiencing Heretic II today.  If you do find a copy, it requires a minor computer science degree to get working on modern systems.  The best guide is by Greyment on Reddit. We can hope that eventually Activision will see the value in allowing a site like GOG to re-release this game.  Heretic II is truly one of the best of this series and it only takes a few minutes to get used to the new third person perspective and see the same formulas lay beneath. Each game brings something so unique to the formula, pushing the boundaries of what the engines they are built in can do.  Heretic II takes all the lessons learned to date and really create something special.