Sunsoft created a couple of games for the Sega System 16 arcade platform, and their games were…not exactly original. Bay Route is about a blatant of a Contra clone as you could think of, though it wasn’t entirely embarrassing considering it was a pretty decent copy. Tough Turf is similar in that regard, in that it’s a beat-em-up obviously inspired by Double Dragon, but with a few changes that make it a somewhat unique game.

There are three buttons – punch, kick, and jump – and outside of a jump kick, there’s nothing else in the way of offensive moves. You can hit both attack buttons at the same time to duck for a second, which is an incredibly useful defensive maneuver that far too few beat-em-ups use. Beyond the graphic style, the animation and the short hit stuns are just like Technos’ game, though it’s a bit more technically competent, since it doesn’t slow down as often. But if you play Tough Turf like Double Dragon, you’ll probably get killed pretty quickly. 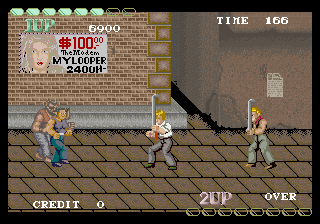 That’s because Tough Turf is based almost entirely around handling weapons. In Double Dragon (and most beat-em-ups), the assorted weapons only appeared from certain enemies, and would disappear after the player was knocked to the ground too many times, or changed areas. That’s not the case here, where nearly every enemy handles a pipe, spiked bat or broken beer bottle, and they never vanish from the playing field. The key to beating the game is getting a weapon as soon as possible, walloping enemies before they can hit you, and picking it back up when you do get pummeled.

This is something you need to get very good at, because the difficulty is very unforgiving. Your cop has eight life blocks and a single life. With only a brief chunk of health restored after completing a stage, there’s very little room for error, requiring almost near perfection. Thankfully, outside of the climactic encounters, there aren’t any boss fights, which are typically the most unbalanced battles in beat-em-ups.

There are eight levels in total, and the stages flow directly into each other, for a bit of continuity. The stages themselves aren’t terribly interesting though, consisting of warehouses, sewers, factories, and the usual garish enemy penthouse. It does have a cool twist at the end though – when fighting what appears to be the final boss, a curtain goes up revealing a woman trapped in a prison cell. After defeating the enemy, she takes you out to the rooftop and attempts to kill you herself, revealing her to be the true mastermind.

The graphics are uninspired, with the enemies lacking personality. The main characters were probably intended to be stereotypical movie detectives, complete with ties and rolled up sleeves, but they end up looking like disgruntled office workers. The music, however, is fantastic. It requires a particular admiration for the sort of grungy FM synth guitar rock that typified many Sega games in the 16-bit era, but it’s damn catchy. It was composed by Shinichi Seya, who was also the sound programmer on many seminal NES Sunsoft soundtracks, including Gremlins 2 and Journey to Silius.

It’s hard to say if Tough Turf is a particularly good game, since it relies solely on the mastery of a single, repetitive mechanic. Outside of the obviously inferior broken bottle and the rare throwing knives, there’s no real variation in the length, power or timing of any of the weapons either. Plus the whole thing falls apart by the final fights anyway – the fake final boss isn’t stunned by weapons so it’s much harder to take him down without getting hit yourself, and the battle against the woman is done entirely without weapons, running contrary to the entire rest of the game. They’re not impossible to beat but require some real cheesing to take down. Still, considering there was very little variation amongst the Final Fight and Teenage Mutant Ninja Turtles clones that popped up in the early 90s, it is interesting to play a game that requires a different approach, and it really is a fresh alternative to Double Dragon.

It’s possible that the name was inspired by the 1985 gang drama Tuff Turf, starring James Spader and Robert Downey Jr., but more than likely it was just picked because its title is alliterative like Double Dragon.