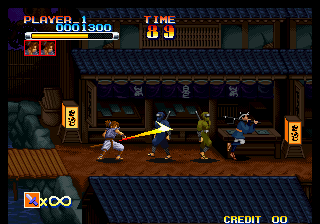 Visco was a company that developed arcade games for nearly twenty years, but their roster was typically mediocre entries based on other more popular products, like the cute-em-up Captain Tomaday or the fighting game Breakers. Ganryu is similarly representative of their output, a side-scrolling action game melded from bits of classic titles titles like Shinobi and Strider.

The Japanese title is Musashi Ganryuuki, or “The Chronicle of Musashi and Ganryu”. Musashi, of course, refers to the legendary swordsman Musashi Miyamoto, while Ganryu is another name for his rival, Kojiro Sasaki. (Haohmaru and Ukyo from Samurai Shodown are based on Musashi and Kojiro, respectively.) Musashi here is, of course, the good guy, with Kojiro summons demonic powers to strike down his longtime opponent. The historical hero is also joined by a lady named Susume, who doesn’t appear to based on anyone, but is there are variety’s sake. Unfortunately, simultaneous two-player action is not available, only alternating.

Ganryu talks a well-worn path, as you saunter forward and hack up ninja dudes and other enemies with your sword. It’s well paced, though it feels like it could use a run or dash maneuver a la Shinobi III to speed things up. Occasionally you’ll run across civilians who are tied up and can be rescued, who will grant a bonus item if you free them. There are also some instances where you’ll see another character fleeing alongside you, though they’re only there for flavor, and humorously, can be seen careening blindly off cliffs. Power-ups include three alternative weapons, including shurikens, dynamite, and spell orbs. While the character selection screen has star rating indicating the differences between Musashi and Suzume, their major difference is how they handle these. With shurikens, Musashi throws a single one forward, whole Suzume tosses two, one slightly at an angle. With dynamite, Musashi simply lobs them at an arc, while Susume sends a fire wave across the ground. The stages aren’t entirely linear, offering a number of side passages and alternate branches, giving you can agency in how you’d like to approach the level.

The characters can grab on ledges and bounces off walls, and also wields a grappling hook. Alas, these elements are the weakest aspect of the game, just because they’re so janky. For example, it’s not initially clear where and when you’re supposed to use the grappling hook, because unlike other games, there are no clear grapple points. Instead, somewhere in the middle of the second stage, there’s simple a sign with an arrow that points upwards, which implies you’re supposed to use the tree in the background to swing back and forth, until you get high enough to proceed. Frustratingly, you can’t fire the hook at an upwards angle, which is how most of the best video game grappling hooks work, so it just feels clumsy. Even worse are the few sections where you’re supposed to scale walls by jumping back and forth between them. The timing feels weird, and you don’t get enough altitude or push when you bounce off something. As a a result, its implementation recalls the hugely troublesome triangle jump from the NES version of Strider. The NES Ninja Gaiden implemented this almost perfectly, and that predates Ganryu by a whole decade! Luckily, the stage designers seemed to have realized this, so the situations where you need to use these acrobatics are sparse, but it still feels like a wasted opportunity.

The visuals feel like a mid-tier SNES game – not really ugly but nothing special – and recalls a sort of boring version of Shinrei Jusatsushi Taromaru. The only time where it excels is during a few boss fights, with the first foe being an anachronistic doll-faced robot, and the third being the demonic equivalent of a Venus fly trap. Otherwise, it looks insanely dated for a Neo Geo game from 1998 – Magician Lord, from (again!) nearly ten years before, made for the same platform, looks remarkably better.

Ultimately, Ganryu seems like one of those low budget titles released primarily so arcade owners would have something new and cheap to stick into their well worn Neo Geo MVS cabinets. The best that can be said about it is that it’s exceedingly okay – outside of the few clumsy platforming elements, the design is mostly solid enough, and it’s balanced so that it’s challenging but not overwhelmingly so. Its five stages make for a brief experience, especially considering the final one is a very brief upwards climb and then the final boss fight, but it also knows when it end before wearing out its welcome.

Ganryu obviously didn’t make much of a splash in its initial release, though in 2017, French publisher JoshProd picked up the licenses to Visco’s library and released an aftermarket port for the Sega Dreamcast. It’s pretty much no frills, being a Neo Geo emulator with a ROM, but it runs fairly well, a substantial improvement over the company’s previous Neo Geo – Dreamcast port, Breakers. It’s nice to have a proper port, even if the game itself isn’t really worth celebrating.