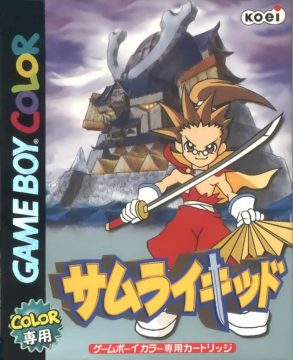 Biox was a developer that never made waves with their output, but Samurai Kid, their final release in 2001, is proof they had potential. Released exclusively on the Game Boy Color in Japan, it’s a puzzle platformer with a focus on manipulating enemies and environments in order to solve puzzles, much like Klonoa or Wario Land. It’s also a visual showpiece, containing some of the smoothest animation on the platform with delightfully large and colorful sprites to accompany them. Interestingly enough, this game is extremely similar to Biox’s previous effort, Daiku no Gen-san: Kachikachi no Tonkachi ga Kachi, to the point that it could easily be considered a spiritual sequel.

The country of Hinamoto is besieged by the Demon King and his army, throwing the once peaceful land into chaos. As Homuramaru, the prince of Hinamoto, your goal is to defeat the Demon King and save the country of Hinamoto. Homuramaru is also accompanied by a monkey named Hide and a raccoon named Yasu, who provide hints in each level. The adventure is bigger than you’d expect for a platformer on the GBC, spanning ten massive levels that contain plenty of puzzles. You’re also encouraged to revisit levels, since you unlock new abilities that can be used to collect health upgrades and coins you couldn’t get previously. In order to earn 100% completion, you’ll also have to complete levels fast enough to satisfy the game’s harsh ranking system, adding further replay value to an already comprehensive package.

Homuramaru’s moveset revolves around three weapons, each with a distinct purpose. The Hyoutan (a gourd) is used to turn enemies into blocks, which you can then kick or smack onto switches. The katana lets you break blocks of any size and naturally makes for the best way to slay enemies. The fan is a bit different than the other weapons in that it cannot kill or stop enemies, but is instead used to provoke enemies, allowing you to lure them outside of their normal movement patterns. All three weapons can also be charged for a different attack, allowing the Hyoutan to defeat enemies from a distance or the fan to push blocks away from you. You’ll also encounter stage-specific items like a drill that can break blocks above you and a cloud that lets you slide into tight spaces, so there’s a lot of moving parts to work with.

The level design makes consistent use of every element introduced and each level offers interesting challenges to overcome. For example, the fifth level takes place almost entirely underwater, causing your jump height to change based on which weapon you have equipped, thus requiring you to switch frequently to get around certain obstacles. Stages three and four introduce enemies that can move blocks around, so you’ll have to determine when to rely on them instead of simply killing them. Every level is capped off with a boss fight as per tradition for the genre – these fights aren’t terribly innovative, but they provide some welcome variety with their designs, including things like a teleporting cyclops monk and a creepy looking monkey with some of the most expressive animation in the game.

Samurai Kid has all of the makings of a genuine surprise hit, considering the positive reception of similar games like Wario Land 3 on the platform. As you may have guessed, it’s rare and expensive to acquire nowadays, but it’s well worth trying out for anyone who’s interested in combing the lesser known depths of the Game Boy Color’s library.

Return of the Ninja