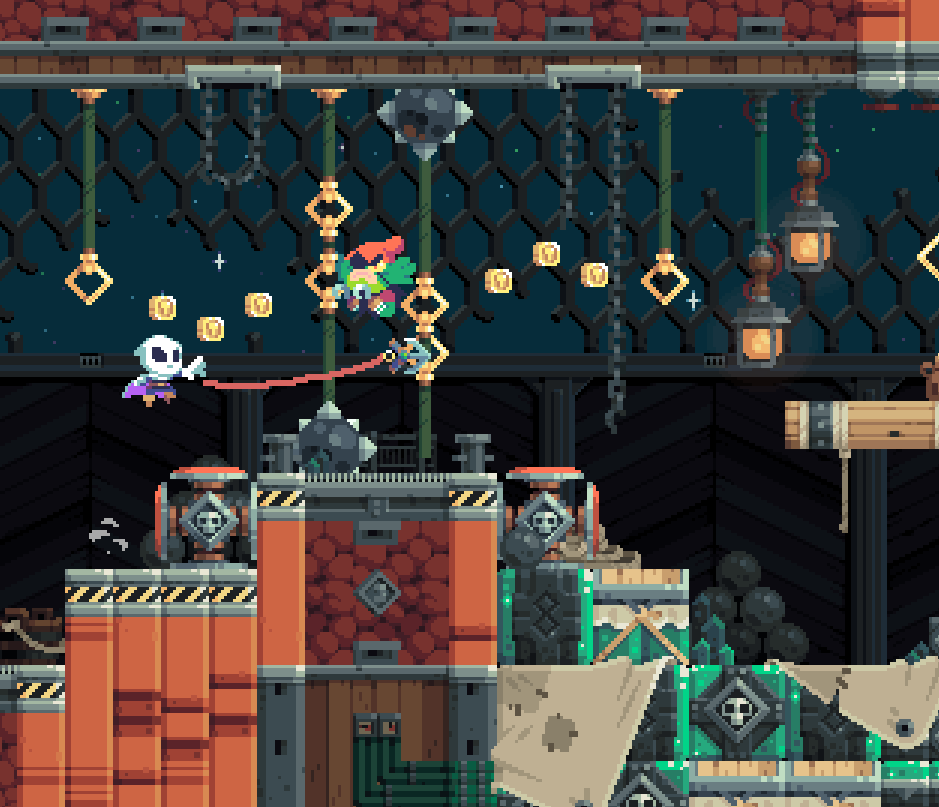 Tribute Games is an outfit that’s known for both their fantastic 2D artwork and their ambitious approach to game design. Rather than merely patterning their games after classic genres, they take the basic concepts and rework them with assorted RPG elements, which is how Mercenary Kings basically ended up as “Metal Slugplus Borderlands“. Flinthook is somewhat similar, it’s essentially a 2D platformer, combined with some lite roguelike (or roguelite) elements.

The game stars Captain Flinthook, a hero who gallivants through the galaxies and raids the loot of the many nasty space pirates. The game begins with you picking a bounty for a space pirate, then you can choose to target a ship for their armada, beginning a run. In each run, you need to raid a certain number of ships – 3 in the first, 4 in the second, 5 in the third, etc. – before fighting a boss. You can take a break between each of this ships, though if you die, the run ends and you need to start over. It does keep track of which bosses you defeat, though, so they essentially act as a checkpoint. Before each level, you can choose from a few different ships, each with a vague summary of the ship, with a vague explanation of what you’ll find in it. 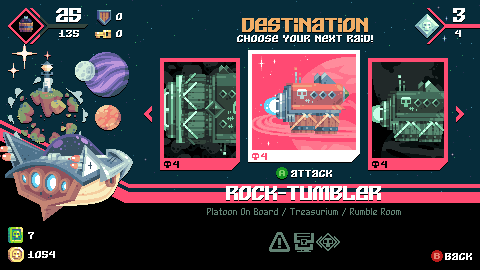 Once you’ve boarded a ship, you’re free to explore its many rooms, some of which will trigger an alert and lock you inside until you defeat all of the enemies. The ship layout is randomly generated, with a large selection of pre-designed rooms with assorted variations, mostly in the types of enemies and traps it spawns, similar to Rogue Legacy. You’ll occasionally find shops, along with perks that last for the whole run, or effects that can have both positive and negative effects (i.e. you gain more experience but lose a point of health every time you move between rooms). Gold is used to purchase most items here, but the most important form of currency are green Black Market tokens, which can be used at a special shop between levels in order to purchase permanent upgrades. The selection expands as you continue throughout the game, though they mostly consist of health upgrades, experience modifications, and tweaks to your gun and hook. You can only equip a certain number of perks at once, though these too are limited, and can be expanded with more Black Market tokens. 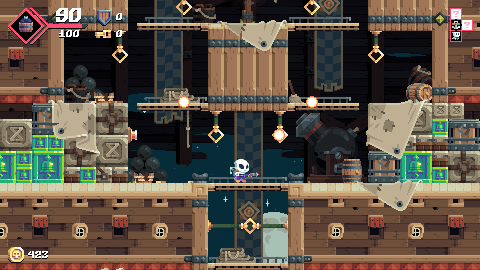 The core of the game is, of course, the hook, which is used to grab onto certain latches. Unlike other games with grappling hooks, like Bionic Commando, you don’t actually swing on them, but rather you quickly grab onto it and then propel yourself in any direction. Since you can aim your hook in full 360 degrees, it presents a versatile tool to quickly zip around the screen. It’s also a lot of fun – while run and jump like a chump when you can just fling yourself around like an acrobat? You can aim your gun in any direction too (though its range is quite short), and using your hook skills in conjunction with your gun is a requirement for the tougher battles. You can also slow down time temporarily, which will also disable certain levels, in addition to making the havoc more manageable on the screen where its spawns tons of enemies.

Of course, while the random generator is generally pretty good about not making rooms that are too difficult, it can occasionally spawn rooms that are absolutely brutal. Since health restoratives are fairly uncommon, if you take too much damage in one, it can potentially cause a spiraling series of failures that can doom you, since it’s hard to crawl out of that particular pit. Plus, the boss battles are incredibly difficult. They’re well designed, requiring that you juggle both swinging on hooks and targeting enemies, but they’re definitely the type that you need to practice. Unfortunately, if you die at one, you lose the whole run, forcing you to replay the 20-30 minutes to reach it again (unless you want to save scum in the PC version, anyway, since it records your progress between stages). 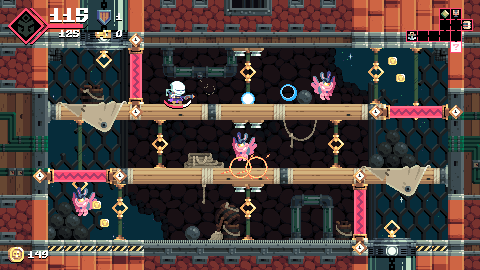 Many of these issues can just be chalking up to it being a rogue-lite, but even that brings some problems with it. There’s just not nearly enough variety in the kind of stuff you find in your runs – there’s only one character, only a single weapons, and just a few fairly useless subweapons. Even if you gain levels, your character’s strength doesn’t really grow much – you might have a little more HP, or a gun that’s slightly more versatile, but not enough that it makes you feel powerful. Plus, even though each of the bosses’ ships have different color schemes, the background graphics are extremely similar throughout most of the game. There’s just not enough variety.

The same goes with the music. It’s all chiptune, and it’s also all excellent, with some running leitmotifs that give the hero a consistent theme as he both flings through the levels and then blows them up. But each pirate also only has one theme that’s repeated through all of their levels, interrupted only by the danger room theme. So on the tougher boards, you can spend hours hearing the same song, which causes the otherwise fantastic music to lose its appeal. 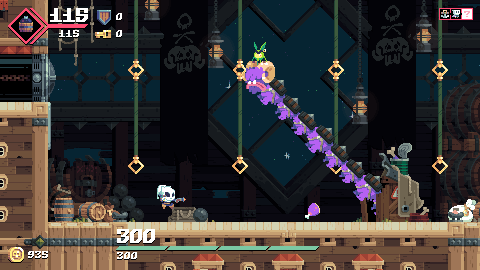 There are a number of other quirks too. Like all of Tribute’s other games, Flinthook is full of beautiful pixel artwork, all extremely well animated. The full screen cinematics, when they pop up, are just gorgeous, and even the smallest enemies have an extraordinary amount of personality put into their sprites. But that amount of detail causes other issues, mostly chalked up to the fact that the game is just too visually busy. Each screen is filled with objects, but it’s not initially clear which are destructible and which ones aren’t. There are little animations, like sand blowing, that suggest an enemy attack, but it’s just there for effect. Certain types of spike traps are all but invisible until you’re triggered them. There are some control issues too – certain enemies have bubbles around them, which you need to pop with your hook, but the auto-aim might accidentally attach to a hook, reeling you towards them instead.

Some basic tenements of the game are badly explained or not explained at all. For example, leftover gold is converted to experience, which is great, but you won’t know this unless you pay attention to the mountains of info buried in the post-game tally up screen. What do all of the descriptions that describe each ship actually mean? Much of this can be learned over a few hours, but this shouldn’t be necessary. 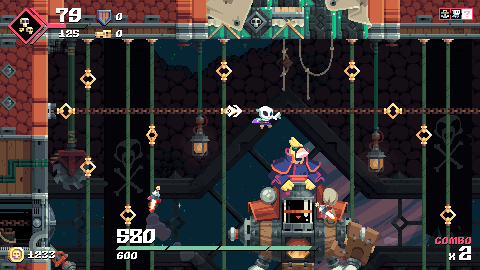 Overall, Flinthook is stuck in a weird place where it has trouble justifying its existence as a rogue-lite. On one hand, the core mechanics are so fun that it could, potentially, be played infinitely. On a moment-to-moment basis, it looks great, the agile movement is consistently satisfying, and when some of the niggling issues aren’t a problem, it’s a total blast. But the lack of varied content and high level of difficulty on the boss fights also suggest it’s more of an attempt to stretch a three hour game by several orders of magnitude. There are infinite modes and daily / weekly challenges, and when focused solely on score or seeing how far you can get, it works fairly well. This suggests that the concept might have been better as an alternate game mode rather than the focus. There’s a lot of good in Flinthook, but it needs some expansion or restructuring to turn it into a classic.