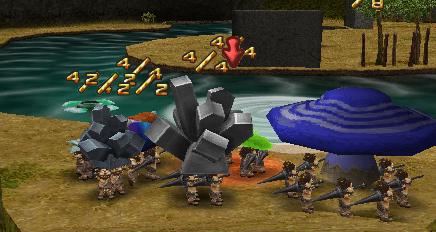 The Adventures of Darwin, by cheapo developer Vingt-Et-Un Systems and released as part of the Simple 2000 line in Japan, is usually classified as a RTS. Looking at screenshots or videos of its tiny monkeys and cavemen following their leader around and carrying objects, you might think you’re looking at a budget-priced Pikmin knock-off, and the game itself isn’t exactly in a hurry to explain what it’s really about. But the RTS elements are more restrained than in Pikmin; at its heart, it’s more of an action-adventure game. Think Zelda, if Link had 20 mini-Links following him around.

Something that should also be established: the Darwin who stars in this game is not a scientist, but, in fact, a brave monkey. After dreaming of an incoming apocalypse, he decides to go out on a journey of discovery with a group of fellow warriors, hoping that the knowledge they bring back will allow the village and its inhabitants to evolve enough to avert the disaster or face it when it happens. 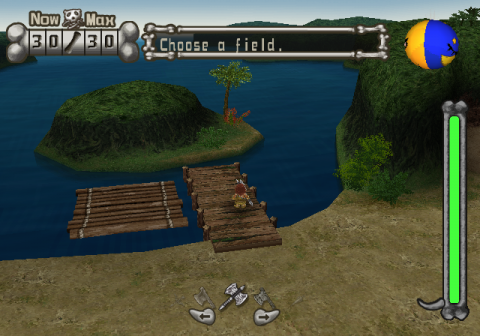 This and the ending are all the story you will find in this game. You can talk to fellow villagers, but they’re only around to give you advice. Outside of the village are five locations to explore, though only a large forest/jungle area is initially accessible. They are filled with various fruits, mushrooms, minerals and animals, some peaceful, some hostile; any thing you bring back goes toward leveling up your village, with a much greater reward for things you’re bringing in for the first time. As the village grows, so does its population, and new buildings and functions become available. Its growth is pre-determined; the only influence you have over it is by favoring certain minerals, as either Wood, Rock or Iron also level up as the village does, granting you specific upgrades as they do.

Most importantly, these areas also function as dungeons; each has a boss protecting an object that will take your species to the next evolutionary step and open up the way to the next area. In order to reach them, you will need to find Gold Stars that increase the maximum amount of warriors you can take with you, allowing you to push down walls blocking the way and fight more efficiently. The more you have, the more resources you can carry back to town, so it’s usually good practice to handle the dungeon part before scouring for resources. 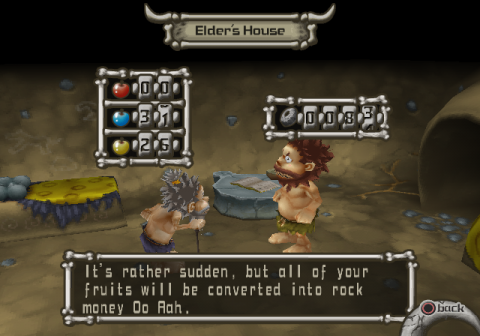 The battle system is simplistic; targeting an animal with R1 and pressing X will get your character to attack it, and all your warriors will go along unless they’re currently carrying something (which you can have them drop by pressing Circle). They will also attempt to follow you as you move out of the way to avoid enemy attacks. In the beginning you’ll be fighting bare-handed, but eventually you gain access to axes, spears and bows, whose speed and power depend on which material they’re made out of. There’s a real satisfaction to bringing down a huge mammoth with a torrent of arrows or watching your band of cavemen promptly spear a T-Rex to death.

Evolution also brings about new formations essential in managing your increasingly large crowd of warriors, from single file which allows you to cross bridges without most of your army drowning to the Cross formation that boosts your attack and defense. No matter what you do, you will lose a lot of followers; replacements can be called upon in the field by finding red stars or in the village’s bar. There’s even a graveyard in town where you can honor the deceased, and if you’re really terrible, God Himself will grant you the game’s strongest weapon to help you out. 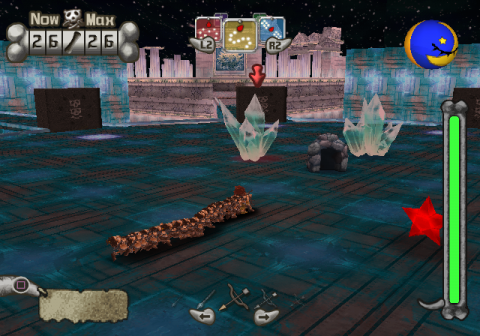 Like most elements of the game, the visuals are simple and charming, particularly in town where you get to see your apes and cavemen from up-close. Most of what you’ll hear is the kind of lighthearted, percussion-heavy music usually associated with jungles and savannah in cartoons and Donkey Kong Country. It’s all pleasant stuff, full of flutes and xylophones. The exception is the last area, the surreal ruins of a modern city seemingly holding still in space, with its theme reminiscent of the more mystical tunes you might find in an old Japanese RPG.

While it can be involving and rewarding, it should be said that Darwin is for the patient gamer. Leveling up the village isn’t very long if you do it right, but it remains a repetitive task that revolves around backtracking. Thankfully, you can increase you walking speed by training at the Treeleaf Gym (hint: level up your Wood some), which really speeds up the process. There are rough spots too; moving your warriors up stairs or through confined passages is often frustrating as they get stuck behind or fall off, and there will be moments when two thirds of your warriors die in an instant of inattention or bad luck. Vingt-et-Un Systems tended not to bother with tutorials, and you’re expected to figure things out on your own with just a little help from the villagers; some players will enjoy that aspect, while others might run to a FAQ. 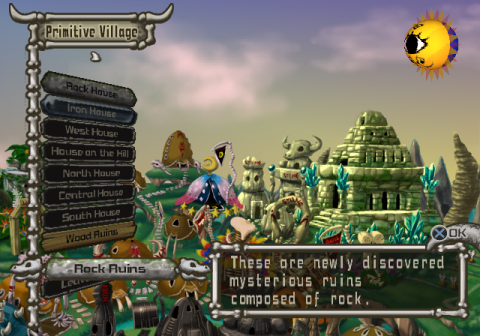 There are nifty little touches, too. Time passes as you play, with animals sleeping at different moment of the day, making for easy targets when you need meat to restore your health. You can drop the items you’re carrying to form a barrier in front of a beast and fire at it from behind it. There are small puzzles to solve, such as luring a giant fish into a whirlpool to damage it or stepping on platforms at the right time to fire cannonballs at Zeus. The ending changes depending on your performance; after defeating the final boss, you will receive a gift that will influence the future of Darwin and his species. A pistol, for example, results in its self-destruction after 20000 years, while a crown leads to eternal happiness. Monarchy is the ideal political system, apparently. Who knew?

Adventures of Darwin was one of the rare Simple 2000 games to be brought over not only to Europe, but North America as well. It’s also one of the few actually worth playing, along with most of Vingt-et-Un Systems’ entries.