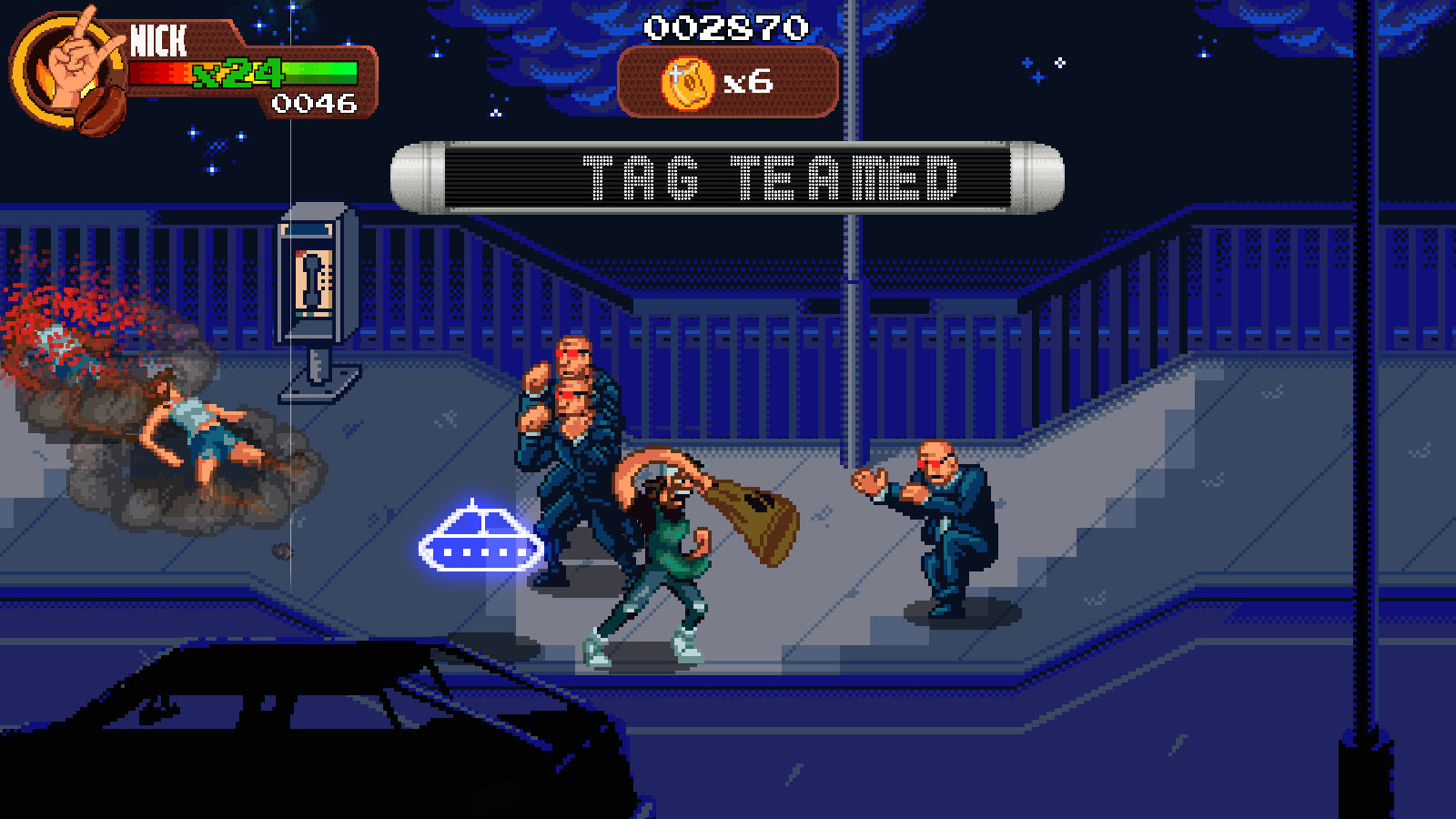 There are tons of indie games inspired by 8- and 16-bit games – a few of them go so far as to develop them to be played in the original systems. That’s the case with Coffee Crisis, which was Kickstarted in 2016 and later released on the Sega Genesis, before receiving a Windows port in 2018. It’s inspired, to some extent, by Streets of Rage and other similar games, though it’s much, much sillier – the concept is that aliens have invaded, and only two baristas can stop them. You’re guided by the old crazy wizard-like guy Yinzer, a reference to a peculiar bit of Pittsburgian slang. 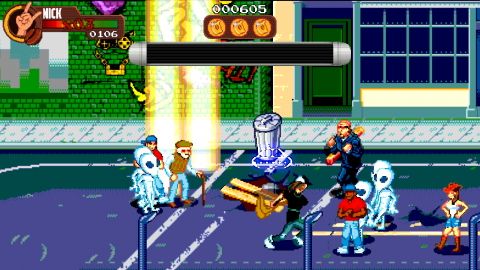 Of the four buttons to control the characters, there’s an attack button (to swing your coffee bag), a grab (to toss or slam enemies or pick up weapons), a special attack, and a jump. Though there is an onscreen combo meter, there’s nothing too fancy about the combat system. Though the attacks are quick, they’re also a little stiff, and don’t really feel all that satisfying. When facing a few enemies at a time, it’s not a problem, but even on the lowest difficulty levels, it likes to spawn dozens, which then flood right at you. Many enemies also have mid-to-long range attacks that are almost impossible defend against when you’re already pummeling a group of enemies. The crowd control special movies help here, but you’ll also go through your health very quickly using these. The characters – friends and foes – also move too quickly, so the pacing feels very strange.

There are also some modifiers that pop up regularly, which were added to the computer version, though their effect is random. Sometimes they’ll turn you temporarily invincible; sometimes they’ll spawn a horde of enemies; other times they’ll change the screen filter. This feature allows the game to be advertised as having “neo-rogue” elements, even though that’s a huge stretch of the term. While it keeps the game lively (built-in Twitch functionality also allows viewers to vote for effects to inflict the players) but it also makes the balance feel really messed up, especially when invincibility tokens keep spawning. These can be disabled, if they’re too disturbing. Little aliens holding brown bags also pop up every once in awhile, who can be beaten mercilessly to get power-ups – these are references to the little gnomes from Golden Axe. 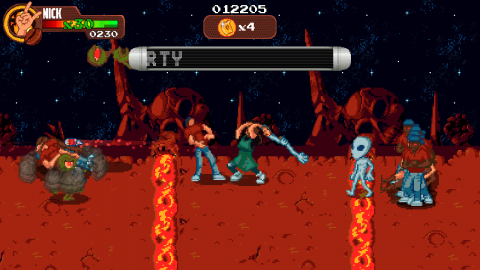 The visuals are fairly well done for what is ostensibly an amateur effort – it lacks the specific style of the gritty 16-bit era, but then again it’s not really meant to replicate it. Enemies range from aliens to grannies to cowgirls, but they all behave basically the same, and type of enemies you face don’t really change much throughout. They also perish with a glowing teleportation effect, which is fine on its own, but again, when the screen is filled with them, it makes it very hard to see anything. There’s also a board that relays various messages, some relevant to the action, others just random stuff, occasionally with dirty jokes (“Flicking the bean”, etc.). Ultimately it ends up being little more than a distraction. The music in the computer version is all heavy metal played by Mitch Foster and AJ Noe, which fits the chaos, but it’s constantly interrupted whenever you pick up an invincibility token, so it’s hard to feel a song for any length of time. It’s a huge step up from the Genesis cart version though, whose soundtrack was rather poorly converted for the system’s FM synth ship.

There are technically eight stages, though some of these are just extremely brief boss fights, so that number is slightly padded. The developers took an enormous amount of pride in setting this game in Pittsburgh, Pennsylvania, featuring a number of local landmarks. The game gets progressively detached from reality as it goes on, with one stage set in what can only be described as a caffeine-induced hallucination, before setting off into outer space to face the final enemies. Levels are also punctuated with coffee swilling minigames, where you need to jam the button and keep the meter at a certain levels, in order to gain extra life. 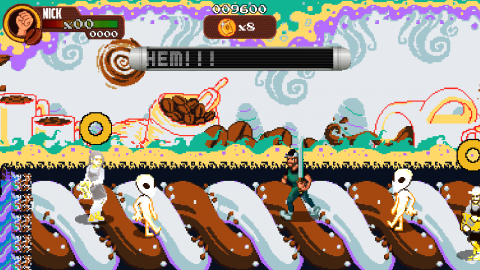 There’s a certain level of passion built into Coffee Crisis – the team obviously really has a thing for heavy metal, coffee, and Pittsburgh, and they put all of the effort into making a game with all three in concentrated quantities – but purely as a beat-em-up, it’s cluttered and not particularly well designed. There are only two characters, the moveset is small, and the enemies just aren’t fun to fight due to their numbers and their aggressive AI. The silliness might be worth the low asking price, at least for the computer port (not so much the actual Genesis cartridge), but it hardly stands up the classics.