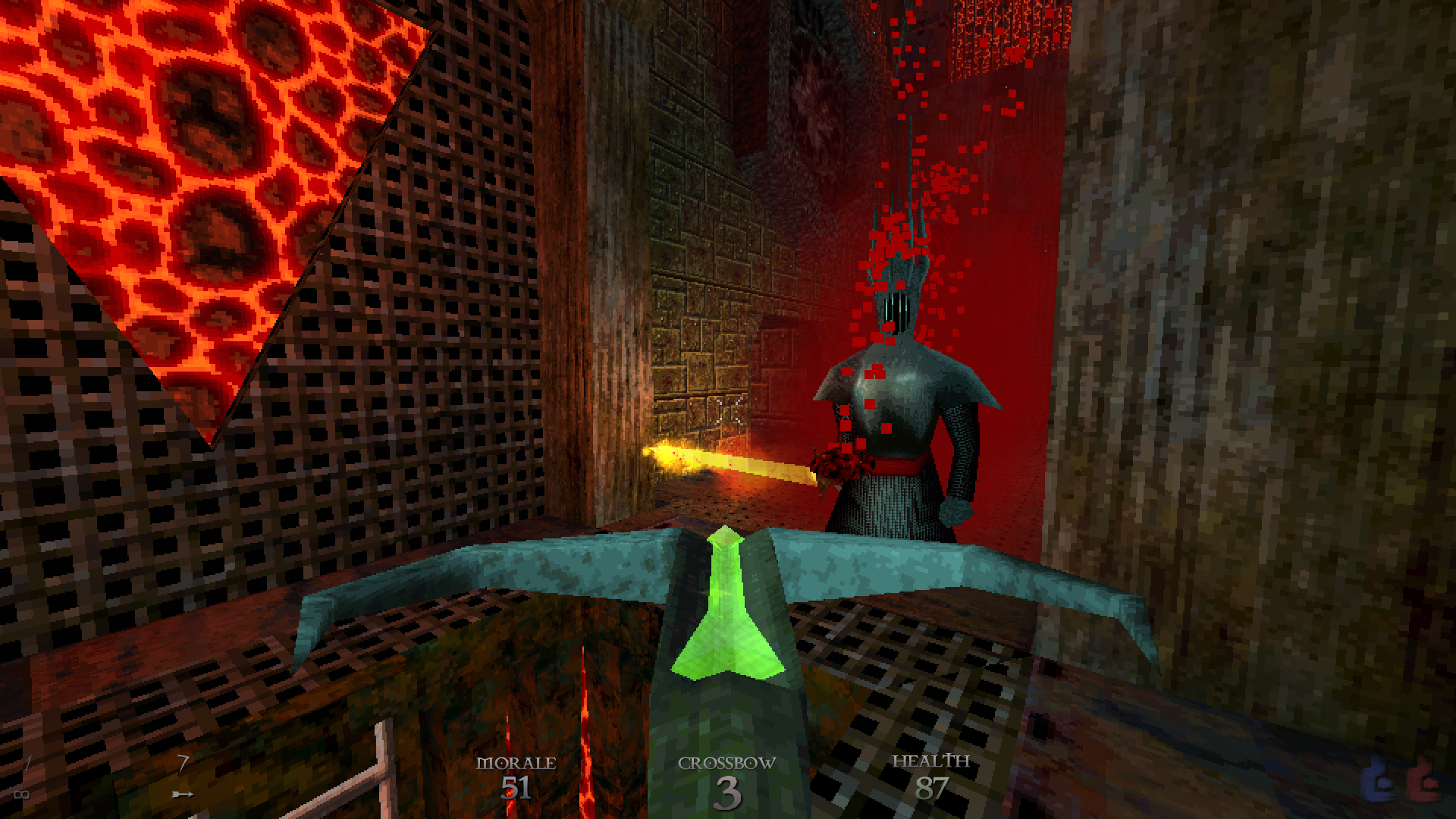 Dusk is part of trend of nostalgic, indie-developed first person shooters, which aims to recapture the genre’s glory days back in the mid/late 90s. The premise is a blend of popular tropes, mixing horror and science fiction. You explore the town of Dusk, Pennsylvania, which has seemingly been overrun by a cult, which in turn reveals a series of Lovecraftian ruins beneath its surface, and military experiments gone awry.

Like a lot of throwbacks, Dusk presents a 90s FPS through an idealistic light, from how we remember them, rather than how they were. The pixellated, low resolution textures and boxy, low polygon models channel the original Quake displayed in VGA – the game even starts with a fake screen that looks and sounds exactly like MS-DOS. However, the colored lightning is something out of Quake II, and the emphasis on darkness and flashlights is beyond what technology at the time could accomplish. It gets the aesthetics almost perfect though – for example, the environments attempt to mimic real-life but have that slightly unnatural disproportionate feeling that was common in this era of 3D games. It gets a lot of mileage out of simple effects, like having long, dark tunnels or shafts pasted with the same brightly colored texture, in a way that hyponotizes when passing by at great speeds. A few advanced display options lets you play with the color palette and other features, including a pixelization level in case you want to remember what it felt like to play the original Doom in low detail mode. There are three episodes – The Foothills, The Facilities, and The Nameless City – and each level ends with a low resolution background as the number of enemies you killed and secrets you found are totaled up. Each episode ends with some dramatic flavor text that leads into the next episode. 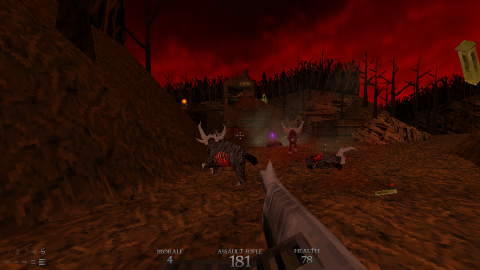 Beyond the stylized look, the developers of Dusk have almost perfected an early 3D FPS. The action is extremely fast-paced – auto-run is turned on my default – and the weapons are perfectly balanced – even the pistols can be useful! Many types have low HP, and there’s often tons of them on screen at once, make it ever-so-satisfying to mow them all down. But there are also tougher foes mixed in within them, like the flamethrower guys, who take quite a bit more ammo to take down but explode when they feel over. There is a slightly higher level of interactivity than expected – there’s some basic physics, and you can pick up stuff like barrels and boxes, so you can chuck them at enemies or stack them to get into higher areas. There’s nothing much in the way of puzzles though so none of this is really necessary or expected. You can also slide by running and hitting the crouch key.

Curiously, rather than armor, you have “morale”, which fundamentally works the same way, absorbing some damage and depleting when you take a hit. The idea seems to be that if you’re in higher spirits, you can just shake off getting shot in the chest. Morale is increased by grabbing gems and other treasure, along with a few other actions, like quaffing booze (which will make you drunk if you do it too much, a common joke in 90s games) or finding a mattress and taking a nap. 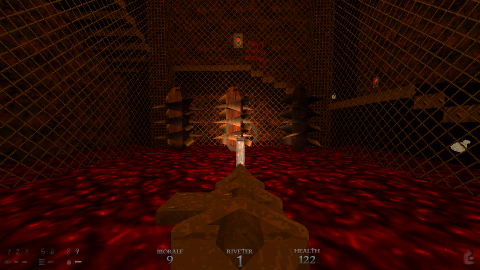 You can hold all weapons at once, each having their own purpose, and there is no regenerating health. The arsenal is about what you’d expect, with a pair of scythes being the standard melee attack, to accompany the usual pistols, shotguns, super shotguns, and assault rifles. The grenade launcher here works a bit differently from Quake in that you can choose to detonate them whenever you want with the right mouse button, while the rivet gun is basically just a rocket launcher. The rest of the weapons are familiar but have some unique aspects, like the crossbow, whose bolts fly straight through enemies and can take down several foes at once, assuming you’ve lined them up, as well as the hunting rifle, which is stronger than the shotgun but has a narrower firing width, and is best used for sniping. The final episode gives you a sword, which can both fire projectiles or deflect attacks, providing you have the required amount of health or morale to pull them off. A few extra power-ups can speed up your firing rate (they stack, too, as the game helpfully explains), lets you climb walls, or makes it so time only moves when you do (a la SUPERHOT).

Everything about Dusk is skillfully implemented, but what really sets it above and beyond is its brilliant level design. The first episode is a little standard – lots of farms and underground areas, filled with floating wizards and living, shotgun-wielding scarecrows. Not all of these stages are winners – there’s only so exciting you can make sewer or mine levels – but even in the weaker moments they’re more interesting than the brown metallic castles or the futuristic corridors of the Quake games. The second and third episodes are where Dusk really hits its stride – one of the best stages here sends you crawling through the depths of some kind of hideous machine, which seems to exist solely to grind up flesh and spit out its remains. It balances an incredibly tight line, as its terrifying and claustrophobic, without being tedious or confusing. 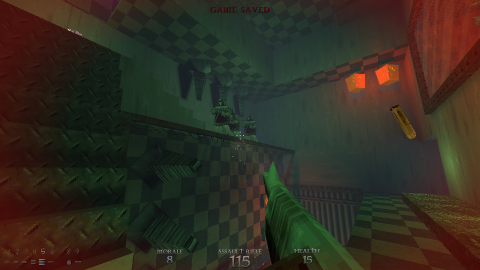 Other levels have weird or interesting gimmicks – the “Escher Lab” is a facility which flips around and reorients its room at a flip of switch (it’s kind of a misnomer because it’s lacking the visual illusions that are the hallmarks of MC Escher works, but it’s cool enough to let slide). Another stage requires that you flood an underground town in order to escape – while underwater segments in video games are typically dreadful, it’s a lot of fun here, because your movement speed isn’t restricted, and since you can swim in 360 degrees, it basically allows you to fly. And then there’s the level with the tornado, which will completely demolish a church sitting of the middle of an expansive plain, and you need to run from it before it tears you to pieces, too. Some of the final levels get insane, especially as it returns to the farm locale at the beginning of the game, except everything is stranded on islands floating over green nothingness, and you play with gravity in absolutely insane ways.

While all of this looks cool, for the most part, it’s not exactly scary. Enemies in explode in chunks of gore and spit out piles of pixellated blood (except for the scarecrows, which explode in straw), but it’s all kind of silly rather than horrific. What really sets the tone instead is the soundtrack by  Andrew Hulshult, which is quietly moody industrial noises as you explore, which kicks into high gear heavy metal when under attack. It’s closer to modern shooters, and is a nice change of pace from older games, which typically just had streamed audio tracks playing the whole time, regardless of onscreen action. (No offense to the excellent Quake II soundtrack, though, because it did make even just running around feel pretty badass, so that’s the downside of having music implemented like this.)

There’s some bits of humor, some of it just knowing winks at how edgy it all is. What little plot there is is dictated by messages scribbled on the walls, or from a distorted, detached voice that taunts the hero on occasion. A few elements show some of the goofier personality of the developer, again, something that was typical of the smaller teams back in the 90s but largely missing in modern development (think of Apogee’s recurring mascot, the Dopefish). The highlight is when you come across what appears to be a children’s drawing of one of the bosses. Crawl beyond a restricted area and there’s a little note that plainly states that “you’re not supposed to be here”. And take a second to admire some of the goofy wall paintings that are sporadically hung around. 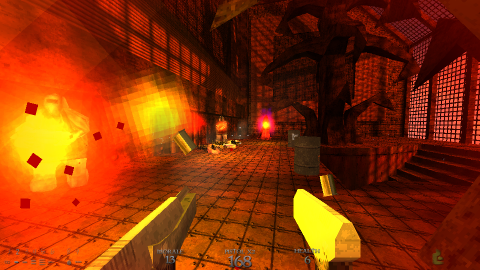 The enemy designs are a little inconsistent in that regard. One of the enemies in the third episode, the Hound of Torment, is a giant legless wolf in a wooden frame, and it looks patently ridiculous as it charges around. Another one of foes, the Cowgirl, for as creepy as it is, looks a little too much like the cyborg midwives from System Shock 2, just with a hat. More successful are the Wendigos – Doom had demons which were supposed to be invisible but were instead just transparent, so you could see them, it was just kind of difficult. There actually are invisible monsters here, which will reveal their presence either via bloody footprints or by slashing away at you. Hit them once and they’ll reveal themselves with a shrill violin noise, which never stops being frightening. Then there are the Horrors, which mostly consist of large distorted faces and spindly limbs, but they appear so quickly and attack so suddenly that they still manage to be slightly terrifying.

If there’s one area where Dusk kind of falters – and this is consistent with most first person shooters – it’s with the boss encounters. There’s not much to them beyond circle strafing and attacking, and most arenas are generously supplied with ammo and health. You actually don’t need to beat any of them, either, since you can just lure them away from the switches that they guard and then run back and hit them so you can proceed. These exist to allow for totally pacifist runs, but it still begs the question to why they’re even there to begin with if they’re not doing anything interesting. 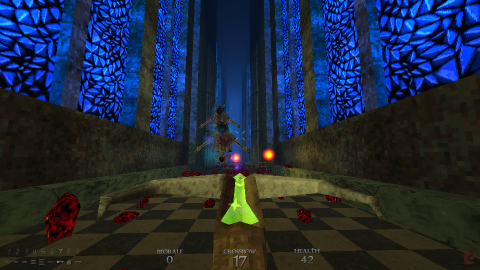 There are still some elements that are faithfully maintained from the old days even though they may throw off newer gamers. There’s no map screen, and you can still find yourself running in circles if you zoom pass an important detail, though the areas are distinct enough that it’s unlikely you’ll get lost. Health doesn’t replenish between areas and the opening sections of the next stage aren’t always stocked with restoratives, so you might have to limp around until you find a stash. You’ll also need to carefully manage your quicksaves/loads, because there aren’t any checkpoints, though you can always just back out and use the level select to restart the stage in case you find yourself in an impossible position.

Dusk nails everything you could hope for with these kinds of genre throwbacks. It’s supremely polished in every regard, evolving on the best aspects of these titles while still crafting a game that’s both artistically engaging and massively fun to play. Old school fans will almost definitely love the hell out of it, just for being a return to form. And as long as they aren’t expecting 20 hour campaigns, regenerating health or objective markers, even modern gamers will find it supremely satisfying.