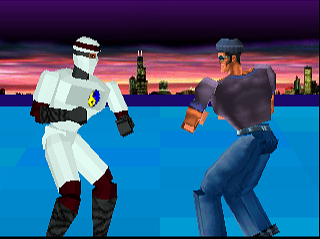 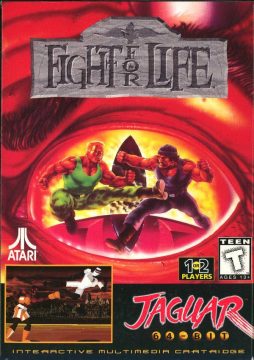 The Jaguar! If ever a video game system has managed to carve itself a special place inside the hearts of gamers, it’s this one. Oh, it’s a small place, to be sure, and some like to pretend it doesn’t exist. “I have never heard of this Jaguar system”, those naysayers claim, “and if something carved itself into my heart, I would die.” Others point to its fantastic library of titles – a mid-tier port of Wolfenstein 3D! A mid-tier port of Doom! And that Rayman? Every bit as good as all the other versions! Oh, oh, but it has exclusives, too. Did you know it’s got a cool motorcycle game called Super Burnout? It is shockingly similar to Hang-On. And then you’ve got those fighters! There’s a bad Mortal Kombat clone, and another one, and maybe a third? Who can keep track of these things? And if you ever stumble upon Tekken and Virtua Fighter‘s lifeless bodies in a dark alleyway, don’t be surprised; that’s probably Fight for Life, just doing it’s Virtua Fighter/Tekken-killer thing. 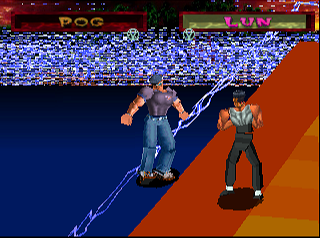 In 1994, the two 3D fighting giants were all the rage. Atari executives, always on the cutting edge, set to work on a game that would blow them out the water to showcase their new machine. “This is 1994, and we’ve got 64-bits of power, maybe!” they proclaimed boldly. “But it’s also 1981, and do you know how many guys it takes to make a hit game? Just one! We’ve got this programmer, Francois Yves Bertrand. Used to work for AM2. He’s our man!”

And so Bertrand went from the very specialized tasks of coding Virtua Fighter‘s camera routine and hit detection to being Fight for Life‘s lead/sole designer, director, and lead/sole programmer. At least they did hire people for the motion capture, art and music.

But it gets better. We know from an interview with Bertrand that four months before release in 1996, Atari stopped paying him, so he decided to withhold the final product. Whether they eventually received it or not is hard to verify. According to Internet lore, Atari wouldn’t let a dumb thing like quality hold them hostage, so they simply commercialized an old unfinished build instead. Checkmate, Francois. 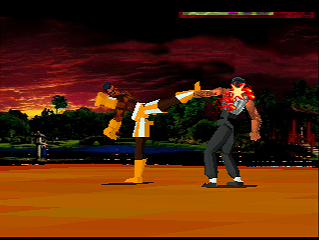 So what does it play like? Well, you begin the game with very few moves, because you have to steal them from some other dorks after you defeat them. In the beginning you mostly just pull basic moves over and over, or two-hits combinations at best – punch-kick or punch-punch – which push the enemy so far away you have to crawl back to them for several seconds before you can hit them again, up until you realize that the dodge button that replaces blocking needs to be held down to dash. Everything is slow and choppy, and hits do so little damage that it takes a while to figure out that thing beneath the fighters’ names is a health bar, especially since it likes to disappear when it doesn’t feel needed. If you’re careless, you might actually jump, which typically results in your landing on the other side of your opponent, back to back, causing the camera to slowly turn around while you find yourself unable to control your character properly. For some reason, you have to press the direction opposite your opponent to face them again. Until you get that down, you might find yourself running towards the ring’s edge for no apparent reason, resulting in instant K.O. by electrocution, because Rings Outs are for kids. Since there’s no time limit, a single two-rounds battle lasts six to ten minutes on average in the beginning. That’s 10 real-world minutes, for a single fight, and God forbid you actually lose a round. You can speed things up with combos and special moves, but you’ll definitely need the manual as the inputs are unusual and hardly seem to relate to the moves they produce; why would Down, Down, Dodge result in a Headbutt? Why, for that matter, does attacking while crouching cause you to get up and attack? A standard low kick is actually a special move in this game!

“But fighting games are all about stories, and I really want to know about Fight for Life‘s!”, you are saying out loud as you read this. You’re wrong and a little weird, but whatever, here goes: every character in this game is dead. They’ve all been murdered, or committed suicide, and are now stuck in a space between heaven and hell, guarded by a being who’s decided he’d fancy a martial arts tournament. The winner gets to be reborn. There’s an arabic guy with a made-up name, Muhali. He had six wives, but still cheated on them, so one of them killed him. There’s a girl from the deep south named something-or-other, who traveled the world dressed as a man to improve her skills, like a common Ryu. Her airplane was shot down by a missile! What the hell? Anyway, in-game she wears a skin-tight outfit and likes to yell “I’m so pretty!” while gyrating her hips when she wins, which is totally coherent with her backstory. There’s a ninja who doesn’t know what a ninja suit is supposed to look like, a boxer who must have been killed in his combat gear and still hasn’t taken those sweaty-ass gloves off his hands, and other boring murder victims. 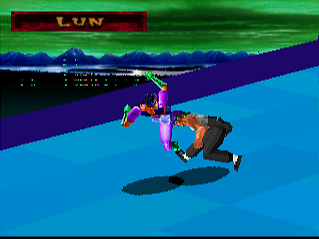 But it’s not all bad. Some of music is kind of catchy, in a cheesy lo-fi way, the announcer’s throaty demonic laugh is amusing, and the clearly unfinished intro, in which fighters just stand around staring at each other while the camera does its best to make it look exciting, is well worth watching.

The game itself is too tedious to be any fun in single-player, even ironically. Maybe convince a friend to play against you, and you can flail at each other for a while as you catch up on life.