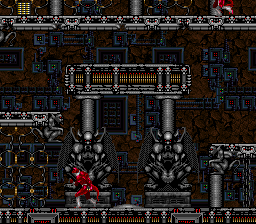 Origin Systems is a company that made video game history not only with its seminal Ultima franchise, but also with their long-lived space combat simulator series Wing Commander, which garnered much acclaim and recognition. Another game of theirs that kept the space setting, but in a completely different genre, was Metal Morph, a hybrid between a run-and-gun action and a shoot-’em-up for the SNES. Unlike Wing Commander, it didn’t meet with any acclaim or successor, and it is all but forgotten. This not only because it has always been out of place among Origin’s portfolio, but also because, to be honest, it’s not really good at all.

Metal Morph, in an effort to be “cinematic” no doubt, welcomes us with a homage/spoof of the famous THX sound system “Deep Note”, and then cuts to the B-grade sci-fi plot. In the year 2214, Earth scientists created the “Hypergate”, a portal to another dimension, but the only one capable to traverse it is our hero Metallion, who is made of living metal, just like his (horrible, egg-shaped) spaceship. As the Earth’s ambassador, he meets the alien committee, just to be captured and experimented upon. The aliens want to replicate his morphing abilities to go through the portal and invade our dimension, but our hero will have none of that, and escapes by turning into silvery goop. 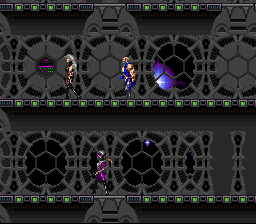 The game starts right there, with a platform sequence of Metallion trying to escape from the facility where he is held, to retrieve his spaceship. He’s your typical “tough guy” – in the intro looks like a rip-off of Mortal Kombat‘s Kano (so, a second generation rip-off, since Kano himself is based on the Terminator) but with the added ability of turning into a glob of liquid metal. Conveniently, when in liquid form he is (mostly) invulnerable and undetectable by the enemies, but forget about being able to murder them stealthily like the T-1000 cyborg. In this status he is only able to very slowly ooze around and go down pipes like some kind of drain cleaning product.

The objective of the platforming levels is usually to find the Morph Pod, the MacGuffin of the game, to open the exit, and then the exit itself to go back to the spaceship. The idea is that you use the morph as a scout, to find power-ups and switches, and then turn back into human form to kill everything, but in practice it doesn’t work very well. For starters, the enemies overcompensate for our slimy invulnerability by leaving the human form almost no time of reaction, shooting as soon as they spot the player (sometimes even from off-screen), and since Metallion goes down in one hit, it gets frustrating quickly. Basically he needs to stay almost always morphed, until he finds a shield that encases him in metal for a few seconds of protection. Also, he doesn’t have lives but continues, so every time he gets shot there is a countdown… however, if you push the button you will continue right where you died, with a couple seconds of mercy invincibility, so what’s the point of this? Just to make us lose a few seconds? 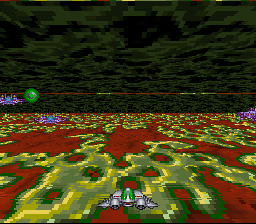 Once on the egg-ship, the game turns into a rail shooter, but things don’t get better. Shooting sequences – both in the void of space, with the next planet in the distance, and over said planet – sport two different control schemes, flying and arcade, but it doesn’t matter much since they are primitive and almost unplayable either way. The ship is hardly controllable and the two shooting modes – weak but fast, and powerful but slower – are inconsequential as well. One hit still kills you, enemy formations shoot hundreds of what appear to be peas, and the stages go on for far too long with no variation. To be fair, Mode 7 is used to convey a good sense of speed when the ship is over the surface of a planet… speed that is too high even without the speed-up bonuses. Bonuses which, by the way, are randomly given by destroying a capsule-shaped spacecraft that appears after defeating several enemy waves. These include shields and continues like in the main game, and also a barely useful smart bomb. Also, with every other level the ship gains a new and supposedly more effective form, but nothing changes, as usual.

After a while the ship lands on the planet, and the fun starts again – new maze-like levels with lots of unlabeled switches that may or may not be useful, conveyor belts, pixel-perfect jumps, electric discharges that can kill Metallion even in metal slime mode, more pipes to crawl in than Pipe Mania, enemies with a trigger faster than Clint Eastwood… let’s say that the level design is a big source of frustration, and that is not helped by the controls. Our hero, unlike the enemies, has a hard time hitting anything because of the weird angle in which he shoots while jumping, and the jumping controls are troublesome. The option screen lets the player choose the beginning level among the first four, maybe because they knew not many people would have had the patience to complete them (it also has the option of replaying the intro, as if it was some big achievement in video game cutscenes). 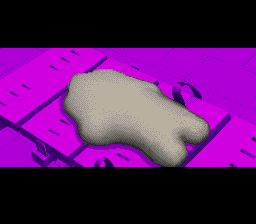 Metallion goes down the drain from the start. Much like his own game.

About the graphics – the platform levels look like factories, caves or space stations with drab palettes consisting of greys, greens, browns and dark purples. The shooter levels aren’t much better, especially when using migraine-inducing flashing textures. Enemy spaceships are not remarkable, but enemies in the platformer sections are, for one reason – outside of dorky androids and robots, they would look more at home in a fantasy RPG. There are, for example, lizardmen, giant insects, snake women, burly brutes looking like golems or ogres and green monsters with sharp teeth. Along with other incongruous elements, such as the demon statues in the first level, they may even be some sort of homage to Origin’s, well, origins (the very first Ultima was actually a hybrid of RPG and space combat).

The music, despite the involvement of the famed Martin Galway, is nothing special – a few atmospheric melodies combined with a majority of tired rock tracks that sound tinny and painfully dated to the 1990s. The sound effects are mostly metallic voices stating what item we have picked up, a sad death cry common to Metallion and almost every other enemy, and the disgusting “sloshing” sound when he turns into a metal blob and oozes down the platforms.

In the end, Metal Morph has pretty much no redeeming features – it is ugly, clunky, repetitive, frustrating, the shooter segments are terrible, the morphing ability is not that interesting (unless you like oozing through cracks and travelling by pipe more than Mario does), the level and enemy design is stale, the background graphics are horrid, and to top it off the “twist” ending sequence is half-recycled from the intro. After all the lengthy ending credits and awful music, it even has the gall to order us “NOW GO PLAY AGAIN!”

A bit of trivia: originally it was supposed to be called “Cyber Morph”, but a similarly terrible game (the Atari Jaguar shooter now mostly known for the infamous Die Hard Game Fan review, which was supposedly written while on hallucinogens) with that name was released in the same period.

Links:
Pix’s Origin Adventures Negative review of an Origin enthusiast and PC gamer. In the comments it is said that apparently Richard Garriott liked it.