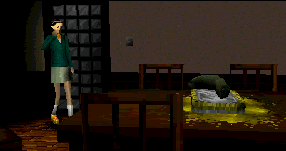 The title of this game is also a bit confusing. In America, it’s known as Clock Tower II, since the real Clock Tower 2 was renamed plain old Clock Tower, because the first game was not translated into English. In Japan, however, it’s consider a spinoff without a numeral, deemed as such since it moves away from the storyline and setting of the previous games. The major shift is that it now takes place in Japan…at least, in the original Japanese version. During localization, the setting was switched to California, and all names anglicized. This bowdlerization is, frankly, the least of the game’s problems. 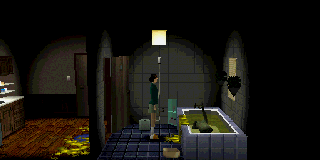 Alyssa Hale (Midoshima Yu) is a quiet, 17-year-old girl who is spending her weekend at her relative’s house. Upon arriving, somehow hell has broken loose all over, finding bits of pieces of what seem to be her cousin’s remains, and various family members hiding from some terrible force. Upon a gruesome discovery in a bedroom, Alyssa’s alter ego and violent split personality, Bates (Sho), awakens from an apparently dormant state and possess Alyssa. This helps her toughen up to the current scenario until she finds her Amulet (Mikoshi-sama, as she calls it in Japanese), a gift from her father that fends off this other persona inside of her.

Somehow, it’s discovered that her little cousin Stephanie (Chinatsu) has gone into a killing rampage and is attacking everyone in the house. Soon you find that she was playing with a fabled “cursed” statue that her father was holding on to for Alyssa’s father, and now she’s basically possessed. Forced into turning into her Bates personality to fight her off, Alyssa burns the statue, freeing Stephanie from the curse.

The whole ordeal soon catches up with the police and all the injured family members are taken to a nearby hospital, while her uncle is taken for questioning. Young Detective Alex Corey (Ishizue Hitoshi) from a neighboring town briefly interrogates Alyssa about what happened, and reporter Doug Bowman (Gomoto Wataru) “pokes” around for clues before the clinic is invaded by an onslaught of undead minions that forces them into a research lab. In here, Alyssa manages to find and escape from the fabled “Maxwell” (Saidou), an individual who has been somehow “possessed” too and is killing anybody who gets near him. Evade him and Alyssa will catch up with her father, revealing the machinations behind the game’s entire story.

Being barely a year younger than the previous Clock Tower, this one adopts some of those gameplay elements with few changes. It has the same drop down inventory menu, the same arrow/health system, and the same panic countermeasures to avoid death.

Unfortunately, the biggest change is the pacing. Now you’re not allowed to fully explore an area until certain events have been accomplished. The problem is that there’s no real logical connection between any of these events or restrictions, nor is there any physical roadblock that stops your exploration. For instance, when you start the game at the entrance of the house, there are three doors and a stairway. You can’t climb the stairs until you’ve explored behind all of the doors, but there’s no hints to this effect, nor anything actually blocking the staircase. The hotspot will simply not activate. Beyond how infuriating this is, this also means that the open environments of the previous games have been discarded for a more linear style of play. Now just picture how this dumb mechanic will further translate when the later areas get twice as big as this house, and you can only imagine the headaches.

To add insult to injury, there’s also another mechanic that makes this more contrived. At any given time, you can have Alyssa to put down her Mikoshi Amulet, prompting that the next time she’s in danger, Bates will come to her rescue and will switch personalities automatically until you take the Amulet back from where you left it. Confusing? Yes, but it doesn’t stop there. Bates will often check hotspots that Alyssa can’t, and vice versa, forcing you to get in harm’s way to switch personalities when you have exhausted all possibilities as the other one.

The only pay-off to this is the fact that Bates can use weapons (pistols and shotguns to be more specific, or the cheat-unlockable amulet named “Milicana” that fires some kind of magic beam) that Alyssa can find and won’t touch. Hiding places are scarce in this game, so you’ll often need to brute force your way out of sticky situations. This happens way more often than necessary, especially in the second chapter. 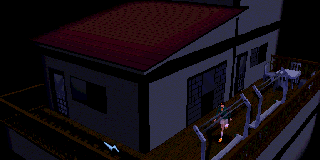 In general, performing poorly or making “bad” decisions will lead you into one of the ten “bad” endings. The other three “good” endings can be achieved if certain conditions are met, if certain choices are made, and whether certain characters are alive. Even Alyssa herself will verbally doubt her actions if you choose one of the alternative endings. The “Save” feature is more flexible this time around, at least. You’re able to save your game any time when you’re not in danger, and also load on the spot. So, if you’re about to make decision you might think will change the final outcome, you’re free to load again if the result isn’t the desired one. This will be a necessary evil when facing the many variables that affect the game’s multiple endings. With this said, if trial and error is your hell, then Ghost Head will be your biggest offender.

At least the sound design is pretty good. There is more music than in previous games, and Kaori Takazoe is back for the last time to make sure the soundtrack lives up to the game’s lineage. Stalkers have their “Shiver” theme (which is the music that sounds when they’re around) and “Appear” theme, which comes when you’ve been around for too long. Sound effects on the other hand are subpar (handguns, for instance, sound like someone spitting on an aluminum plank) and are also often quite glitchy. The voice acting is often laughable with dumb dialogue (“A human Torso!”), numb acting (“Ha, I’m going to kill you!”) and crude remarks from Bates (who is the only highlight, voiced by Roger L. Jackson, Ghostface’s voice from the Scream movie series). 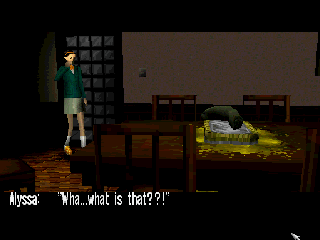 The graphics are simply dull. The developers were probably still struggling with the PlayStation hardware at this point or ran out of money to support this department, considering what others games looked like at the time. There’s constant clipping among the floor tiles as the camera rotates, and objects resemble poorly made origami counterparts of what they’re supposed to look like. The characters are marginally better and at least look something like their intended design. The FMVs are a step up, though, as the character models actually look like people, have great facial expressions (much lot better than CT2‘s blocky-dead-eye mannequins), animated hair and even smooth animations.

It’s worth mentioning that the localization is half-assed even when it comes to the setting. Even though the names are swapped, nothing else about the game was changed. So there are all these references to America and names in the middle of a very Asian looking locale. 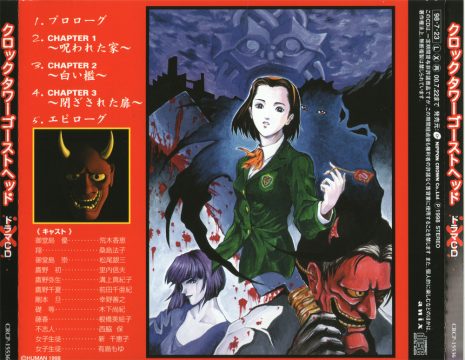 Ghost Head is not a good game by any stretch. The game is obviously underdesigned and the localization is embarrassing. Alas, it somehow gained a cult following unlike any other Clock Tower when it was released, as there is tons of fan art out there, and is one of the few games to get their own Drama Disc. However, due to the closure of Human, it was also the last Clock Tower to ever come from the hands of its original developers.