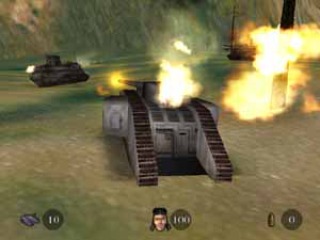 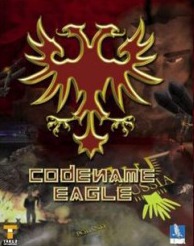 “Even a terrible game can be fun in multiplayer.” That’s a pretty common mantra, particularly in response to questions regarding how games like Halo and Call of Duty continue to sell despite rather inconsistent and divisive campaign modes. The whole point of the mantra is that, even if a game has washed out textures, weak sound effects, glitchy physics and unstable net code, it could still be fun when playing it with friends – even hilarious at times. Such a thing is most certainly the case with Talonsoft’s 1999 FPS, Codename Eagle, developed by Refraction Games, who would eventually merge with Digital Illusions CE and go on to make the Battlefield series on the same basic engine.

Codename Eagle tells the story of an alternate history where the Bolshevik Revolution has failed, and Pietre, the new Tsar of Russia, takes power and crushes every nation that dares stand in his way. It is the mid-1920’s and a resistance movement has formed, undertaking covert missions to finally stop this madness once and for all, before Tsar Pietre dominates the entire planet. The alternate history setting offers some interesting technological differences, such as a handheld machine gun powered by a rather large gear, biplanes with a bomber and gunner seat, heavily armed zeppelins, tanks of all sorts, and (in a later patch) even a helicopter. One would think that the setting would be excellent for a single-player campaign. Unfortunately, Codename Eagle’s SP mode is filled with frustrating moments, from psychic AI, to missions where you’re required to actually land planes (very difficult for reasons stated later), and lastly, wolves.

The game’s codebase is flawed in many ways. While the maps are huge, the vehicle physics are not perfect, with cars tending to flip in spectacular ways before inevitably exploding, planes that can fly at unlikely angles, tanks that will explode if they come in contact with railroad tracks, and zeppelins that will become incorporeal and immune to all but blast damage if they happen to pass through any terrain mid-flight (and Lord help the person that tries to get out of the driver’s seat after this happens, as he will likely fall through the floor and die of falling damage).

The thing is, though, that these glitchy physics actually lend themselves to the most hilarious game of multiplayer capture-the-flag ever. The ghostly zeppelin can be used to stage a diversionary assault on an enemy base, while another player on a motorcycle goes for the flag, shortly thereafter being picked up by a passing bomber plane (since the plane does not need to come to a halt for players to enter or exit the plane). While there were many patches to the multiplayer portion of the game, the silly physics remain, and are likely the reason why players still continue coming back to the game time after time. It’s also no wonder, then, that the developers’ next game, Battlefield 1942, kicked off with such a huge player base from players wanting more not-quite-realistic military action. BF1942 even at some point had a mod, Codename Eagle: Legends, which perfectly recreated Codename Eagle’s “No Man’s Land” multiplayer map. It’s the perfect blend of a game filled with so many objective flaws that just happens to be a total blast to play.